With pressure growing from the Biden administration, two Native American tribes in Oklahoma have agreed to consider reversing their policies of denying citizenship to descendants of Black people who were enslaved by them before the Civil War.

The tribes, the Choctaw Nation and Muscogee (Creek) Nation, said they would take initial steps to address the long-running demands of the descendants that they be granted equal rights as tribal citizens, an issue that has split their communities and highlighted clashes over identity and racism among Native Americans.

But the two tribes stopped short of a commitment to grant citizenship to the Black descendants, who are known as Freedmen, instead saying they would open discussions about the issue. In February, the Cherokee Nation eliminated from its constitution language that based citizenship on being descended from “by blood” tribal members listed on a federal census, the biggest step by a tribe so far to resolve the issue.

Those tribes and others, which had originally inhabited the Southeast, purchased enslaved Black people as laborers in the 18th and 19th centuries, and had brought them along when they were forcibly relocated by the federal government in a deadly ordeal known as the “Trail of Tears.”

Post-Civil War treaties in 1866 gave the formerly enslaved people all the rights of tribal citizenship. But in practice they were segregated and their citizenship rights later denied by a requirement that they be descended from non-Black tribal citizens who were on census lists more than a century ago, a situation that prompted increasing protests in recent years.

“Today we reach out to the Choctaw Freedmen. We see you. We hear you. We look forward to meaningful conversation regarding our shared past,” Gary Batton, chief of the Choctaw Nation, said in a letter announcing that the nation would consider “tribal membership for Choctaw Freedmen.”

David Hill, the principal chief of the Muscogee (Creek) Nation also wrote to the tribe’s national council proposing town hall events and a period of public comment to discuss citizenship for Creek Freedmen.

Freedmen said the tribes took action only after being pushed into it.

He added: “For them to do this now, they didn’t do it on their own. This right here is a prime example of pressure.”

The announcement from the Choctaw Nation followed a statement this month from Deb Haaland, the first Native American secretary of the Interior, addressing the Freedmen of Native American nations in Oklahoma and acknowledging their rights as citizens of the tribes that had enslaved them.

“The Cherokee Nation’s actions,” Ms. Haaland said, referring to the tribe’s decision to amend its constitution in February to grant equal status to its Freedmen population, had fulfilled “their obligations to the Cherokee Freedmen.”

“We encourage other Tribes to take similar steps to meet their moral and legal obligations to the Freedmen,” Ms. Haaland said, naming four other Native American nations in Oklahoma — the Muscogee (Creek) Nation, the Choctaw Nation, the Chickasaw Nation and the Seminole Nation — that had owned slaves and allied themselves with the Confederacy to preserve slavery as an institution. 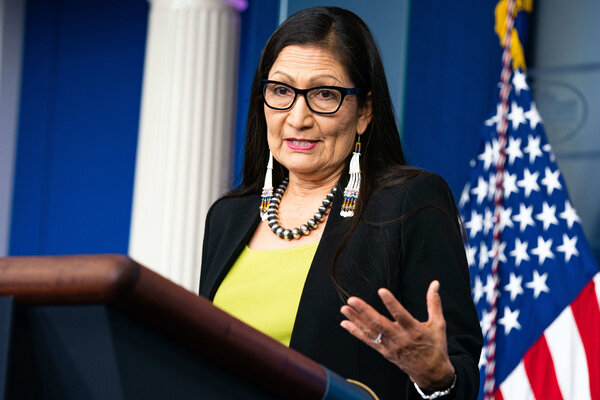 With those words, Ms. Haaland waded into a painful reckoning within Native American nations in Oklahoma that had historically owned slaves.

Changes to the Choctaw constitution in 1983 and the Muscogee (Creek) constitution in 1979 required that a citizen of the nation must be descended from “by blood” citizens, disqualifying the Freedmen who were counted separately in the federal census known as the Dawes Rolls of 1906. The Cherokee Nation had also previously expelled its Freedmen, and the Seminole Nation currently grants only limited citizenship to its Freedmen.

Equal citizenship in a Native American nation would qualify the Freedmen for a number of tribal services — including housing, health care and education — much of it funded by the federal government. Older Choctaw and Creek Freedmen recall being eligible for these services before they were expelled from the nations.

Funding in the CARES act distributed to tribal nations recently funded services exclusively available to “by blood” tribal citizens. Seminole Freedmen who applied were denied because of their limited citizenship in the Seminole Nation.

The Choctaw and Creek Freedmen would also be guaranteed civil and political rights within their nations, such as the ability to vote and run for tribal office.

In interviews, descendants of Freedmen described repeated appeals to the tribes for inclusion as equal citizens and repeated denials on the basis of their race.

“It’s heartbreaking. It really is heartbreaking,” the Rev. McKinley Rice, the senior pastor at St. Matthew Baptist Church in Okmulgee, Okla., and a Creek Freedmen, said. “In the day that we live in, and in the time that we live in, we was hoping and praying that racism and discrimination was, you know, gone.”

The letter from Mr. Batton marked a shift by the Choctaw Nation. Mr. Batton wrote to Speaker Nancy Pelosi nearly a year ago condemning efforts by Representative Maxine Waters, the chairwoman of the House Financial Services Committee, to compel the tribe to re-enroll its Freedmen as citizens by withholding federal funding.

In an interview, Mr. Batton said the federal government played a role in facilitating racist policies like the “by blood” requirement for citizenship. He added that the Interior Department ultimately accepted the constitutional changes from the Native American nations that had expelled the Freedmen in violation of Reconstruction treaties.

“My issue with the federal government is because they’ve implemented policies, and we followed those, and now they’re saying that we should not abide by those policies.” Mr. Batton said. “It’s kind of a Catch 22 as far as I’m concerned.”

Chuck Hoskin Jr., the chief of the Cherokee Nation, who has been a longtime supporter of the Freedmen, said tribes had worked tirelessly to make sure the federal government upholds its treaty obligations. Cherry picking which treaties to uphold undercuts that fight, he said.

“I don’t think any nation is as strong as it can be when it denies its history and suppresses part of its society,” Mr. Hoskin said. “I think that’s what’s happened in respect to the Freedmen.”

Bill Anoatubby, the governor of the Chickasaw Nation, said in a statement responding to Ms. Haaland’s remarks that “Chickasaw citizenship is a matter of sovereignty and is clearly defined in the Chickasaw Constitution.”

The Seminole Nation did not respond to requests for comment.

LeEtta Osborne-Sampson, a Seminole Freedman who serves on the tribe’s governing council, said she did not expect the Seminole Tribe of Oklahoma to follow suit voluntarily. Ms. Osborne-Sampson said the tribe’s position had long been that it would take a ruling by a higher court to compel them to allow Freedmen to be recognized as equal citizens.

Eli Grayson, a Creek citizen with Freedmen heritage, said he was skeptical of the statements from tribal leadership. He noted that the Freedmen barred from citizenship would have no influence over a vote to change the tribes’ constitutions, and predicted the measures would ultimately fail.

“Citizens today do not have a right to vote on an issue that was settled during the Civil War,” Mr. Grayson said. “They’ve already settled this treaty with the U.S. They don’t have a right to change the conditions of that treaty.”

For the Muscogee (Creek) Nation, race was a key motivation for changing the constitution. In a national council meeting in 1977 discussing the changes, the principal chief at the time, Claude Cox, expressed fear that the nation would be outnumbered and replaced by its Black citizens over time.

Mr. Hill, the current principal chief of the Muscogee (Creek) Nation, said in his proposal that citizenship for Freedmen “is a polarizing issue for our citizens.”

“This deeply personal and highly emotional issue goes to the heart of identity for both Creek citizens and the descendants of Freedmen,” Mr. Hill said. “As a nation committed to truth and justice it is important that we reflect upon this issue with an open heart and seek to understand what is right and equitable.”

Last but not least: Exxon chops spending by 30%

Airstrikes launched against Hamas after incendiary devices are sent into Israel

The Training Ground: How does a professional dancer prepare for a performance?