A dirty tricks row has broken out in the race to lead the giant Unite union, with the challenger from the Labour right accusing his three left-wing opponents of plotting a “grubby backroom deal”.

After nominations to succeed Jeremy Corbyn‘s chief union cheerleader Len McCluskey closed, it is looking likely that all four candidates will have secured the required 172 to win a place on the ballot paper.

That has led to claims that at least one of the three left-wing candidates – Howard Beckett, Sharon Graham and Steve Tuner – will come under pressure to stand down to avoid splitting the left vote. And it’s led Gerard Coyne, candidate of the Labour right, to declare: “Any suggestion that there will be a grubby backroom deal between the three continuity candidates would be both anti-democratic and a betrayal of Unite members right to choose.

“It would be a betrayal of those members who have already nominated candidates in the belief they were serious about standing.

“It will also show they are running scared and how desperate they are to block real change in Unite.”

But a close associate of Ms Graham defiantly told The Guardian: “There is not a cat in hell’s chance of Sharon standing down. Given her profile and the level of support she has across the branches, maybe one of the men would like to step aside for a woman?”

The election of Mr McCluskey’s successor is crucial for the Labour Party‘s fightback against the Tories and Sir Keir Starmer‘s attempts to exert his authority on his feuding activists.

Unite is by far Labour’s biggest donor, paying around £1.3m a year in affiliation fees and donating £3m to the party in the run up to the 2019 general election when Mr Corybn was leader.

But since Sir Keir succeeded Mr Corbyn last year, Mr McCluskey and his left-wing allies on the union’s executive have voted to slash Unite’s funding of the party by up to £500,000 a year. 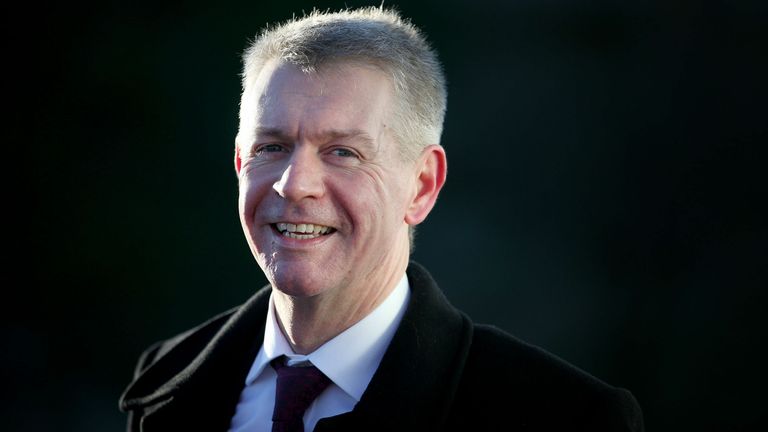 And during the current campaign to succeed Mr McCluskey, Mr Beckett and Ms Graham have both signalled that if they are elected general secretary they will recommend further cuts in funding.

“If Labour continues down its path and no longer speaks for working people it will not be getting Unite money if I am general secretary,” Mr Beckett said in an interview last month.

A Unite assistant general secretary, Mr Beckett is currently suspended from the Labour Party for publishing a tweet – later deleted – which said: “Priti Patel should be deported, not refugees.”

Ms Graham has vowed “there will no blank cheque” for Labour if she wins.

She says she favours “payment by results” and has said: “Keir Starmer has failed workers and needs to step up to the plate.”

Mr Turner, another assistant general secretary, has said he has no plans to cut Labour Party funding, claiming “now is the time not to walk away, but to get the gloves on and get back in the ring”.

Mr Coyne’s accusations of a backroom deal came as he announced he has secured a place on the ballot to succeed the retiring Mr McCluskey by securing the required 172 nominations from Unite branches.

“No other trade union sets so high a threshold,” he said. “Most require as few as 25 nominations; none except Unite require more than 50.” Mr Coyne claims the threshold was raised from 50 to 172 for this contest after he came within fewer than 5,000 votes of winning when he challenged Mr McCluskey in 2017.

He also claims other candidates have suggested that if he reached the ballot paper then two should withdraw to give the other a clear run, knowing he is the candidate they have to beat.

“I’m delighted to have received so much support from Unite members from across the union and can confirm I will be accepting the nomination,” said Mr Coyne.

“Our members have shown they are hungry for real change in Unite. The confident predictions that I could be kept off the ballot paper have been proven wrong.

“I welcome the opportunity to put my message of change before the whole membership and have it compared to the records of the three continuity candidates.”

Earlier this week it was reported that insiders from across the Labour divide expect “showdown talks” about who on the left should stand down if all four candidates end up in the race.

“There would have to be some blunt conversations,” one senior figure on the left was quoted as saying. “It would be foolish to throw away Unite on the basis of three egos.”

The election of a successor to Mr McCluskey, general secretary since 2011, comes after the recent election of leaders of two other big unions, GMB and Unison, who are broadly supportive of Sir Keir.

Denver Issues 4A and 4B: School bond and mill levy override

Gove demands EU ‘show flexibility’ in Brexit talks as he warns: ‘We are sovereign equals!’