Protesters angry over police brutality and racial injustice have vandalised statues and monuments across the US. 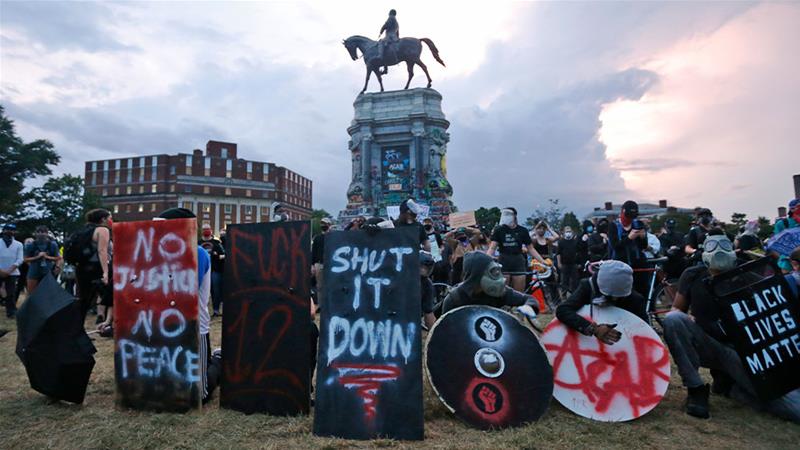 President Donald Trump’s administration has put special law enforcement teams in place to protect monuments across the United States that it believes could be vandalised by protesters over the Fourth of July holiday weekend, the Department of Homeland Security announced on Wednesday.

The announcement did not provide details on the teams’ sizes or makeup, how much the deployment cost, or how they would respond to any perceived threats. It also did not say exactly which memorials would be guarded or whether specific threats were made.

Trump this year will view fireworks celebrating US independence at the Mount Rushmore National Memorial in South Dakota. He has taken a hard line on removing public statues commemorating figures from history, which he has called “beautiful”, and has threatened to use force on protesters defacing memorials.

The executive order he signed last week on memorials established a task force of law enforcement agencies that will gauge the potential for civil unrest or destruction of federal monuments and could “surge” responses to possible threats, according to the department.

The police killing in Minneapolis of George Floyd, a Black man, sparked national demonstrations against racial injustice last month. Since then states, cities and private universities and museums have begun taking down monuments and other memorials considered racist. Many targeted statues commemorate military figures from the Confederacy, the losing side of the 1861-1865 US Civil War, which seceded largely to maintain the enslavement of Black people.

Protesters have also attacked federal monuments, most notably attempting to pull down a statue by the White House of President Andrew Jackson, a one-time slaveholder whose administration is remembered for the Trail of Tears that killed thousands of Native Americans.

It’s ‘Debt Parking’: When Fake Debts End Up on Your Credit Report