He is, after all, the father who used a casual family game night of Uno to invoke Sun Tzu’s military teachings in “The Art of War.”

Afterward, he told his 13-year-old son, Andre II, that his cutthroat mentality had little to do with winning.

“I’ve learned to pick up on my surroundings,” Iguodala said. “That’s something I’ve taught him and that I try to teach him. ‘When you’re watching me play, see how I’m playing, knowing your opponent.’ It’s like ‘The Art of War’ and giving him a few tactics on just seeing life a certain way, where you’re ultra alert and you try to use those things to your advantage. Data is the key.”

That philosophy has been vital for the 36-year-old Iguodala. Players his age make it this far only by countering the loss of young legs with the wisdom of miles traveled.

“There’s no such thing as having enough knowledge,” Iguodala said.

He plays as though he has already witnessed a sequence, arriving with a quick, solid poke of a ball on defense or delivering a pass before a teammate steps into the previously unoccupied space, tendencies learned through a lifetime of studying the game.

He credits that knack to playing for hours a day growing up, watching film as a young player, and witnessing up close the work of the league’s defensive stalwarts of that era, players like Scottie Pippen, Bruce Bowen and Metta World Peace.

“From there, you just store the information, learning the trends of the league,” Iguodala said. “Most teams run the same exact plays, so you know where the ball is going before it gets there.”

The mind-set extends beyond the basketball court to entrepreneurial ventures in technology and e-commerce, worlds he started exploring before his 2013 trade to the Golden State Warriors solidified his link to Silicon Valley.

When this year dawned, all data on the basketball side suggested that Iguodala would not figure in the N.B.A. postseason for the first time in a long while.

The Warriors traded him to the Memphis Grizzlies last off-season, after he had played in five consecutive N.B.A. finals, earning the finals’ Most Valuable Player Award in 2015. The trade created a standoff in which Iguodala and Memphis agreed that he would not report to the organization as the Grizzlies found a future home for him.

For a while, Iguodala appeared more often at the enterprise software company Zuora, where he serves as a board adviser, than on any N.B.A. radar.

“A lot of athletes that do this will stay on what we call the consumer side, the well-known brands, Apple, Instagram,” said Tien Tzuo, Zuora’s chief executive. “I work in more of a space of business applications, business software. It’s not as well known. And he just showed an incredibly strong interest in that. It’s not something that you might approach as a layman.”

The Heat acquired Iguodala in a three-team trade in February and, as he regained his footing, the coronavirus pandemic suspended the season indefinitely.

Iguodala, the first vice president of the National Basketball Players Association, helped coordinate the season’s restart in a bubble environment at Walt Disney World near Orlando, Fla., collaborating on protocols for a return and fielding phone calls from concerned players.

Some voiced hesitation, worried that resuming play would distract from calls for social justice after the police killing of George Floyd in Minnesota. 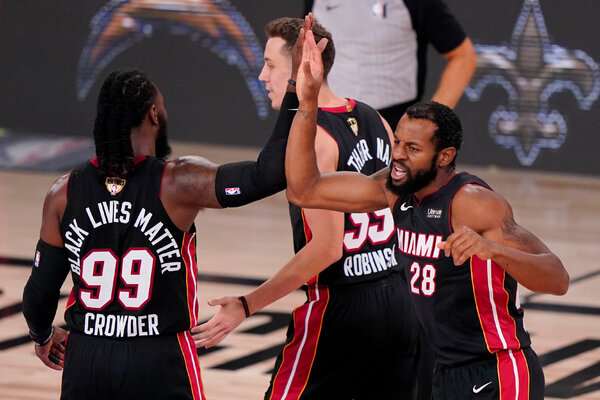 The N.B.A.’s return featured Black Lives Matter wording near center court, and many players wore league-sanctioned messaging on the back of their jerseys.

“You do see the sports leagues taking more of a stance,” said Iguodala, who chose to have “Group Economics” on the back of his jersey instead of his last name. Iguodala added that for leagues with a majority-Black work force, like the N.B.A.: “I think there’s a moral compass there. And so you have to take some type of stance. And it’s not really a political stance — it’s a human stance.”

Then, in August, Iguodala became one of the most vocal players during a series of meetings after the police shooting of Jacob Blake in Kenosha, Wis.

The players initiated a work stoppage of playoff games until the league’s franchise owners agreed to specific commitments, including searching for ways to provide voting access to underrepresented communities.

“How you get so many African-American athletes of that wealth to be able to come out stronger as a whole, as a union, that was a beautiful thing, regardless of what people may have thought would happen,” Iguodala said. “Just seeing all of us being able to have dialogue, whether we agreed or we disagreed with one another, that was huge.”

Iguodala ended the season in his sixth consecutive finals, where Miami lost to the Lakers in six games.

“The bubble was the perfect environment for us, because of how they mentally train the guys to take on any challenge,” Iguodala said. “We were just ready for it, and we made the most of it.”

Iguodala is also making the most of his off-court pursuits. He was an early investor in Zoom, the platform he used to conduct the interview for this article. He joined Comcast Ventures’ Catalyst Fund as a venture partner.

His goal is to continue educating, creating access for and investing in minorities and marginalized communities. In other words, backing up the message he wore on the back of his jersey.

“Professional athletes have too much downtime,” Iguodala said. “That’s how they get in trouble. What I’ve been able to do is take that time and find something that’s purposeful, and it’s a passion, something I really enjoy, and not just monetize it, but also help bring my cohorts into the space with me and help them learn as well.”

Iguodala and Stephen Curry joined with Bloomberg L.P. in 2017 to create the annual Players Technology Summit, a forum to link athletes with executives in technology and venture capitalism.

“People don’t realize the potential athletes have to learn, given the fact that they’ve been professionals in this one discipline for such a long time, from basically childhood,” said Rudy-Cline Thomas, the founder of the venture capital firm Mastry and Iguodala’s longtime business partner. “The potential for learning something outside of that is extremely high.”

As Iguodala’s basketball career winds down — “sooner rather than later” he’ll be able to focus on other things, he said — he wants to make sure other players recognize their value on and off the court.

“We always talk about player health physically and mentally, but ultimately that No. 1 agenda is the dollars and how much can we bring in,” Iguodala said.

Iguodala pointed to the recent sale of the Utah Jazz to Ryan Smith, the chief executive of Qualtrics, for $1.66 billion. The franchise’s previous sale was for $8 million in 1985, when the auto dealer Larry H. Miller bought 50 percent. He later bought the rest of the franchise for $14 million.

“Any player in the history of playing for the Jazz organization — John Stockton, Karl Malone — did any of them benefit from that value increase?” Iguodala said. “Did any of them have skin in the game? No.”

Just 50 days separated the end of the N.B.A. finals from the start of training camp last week. The N.B.A. faced a significant financial loss if it waited until the next calendar year.

“I think players are realizing that we have to stand a little bit more firm with our negotiations, in terms of who’s bearing the brunt of the risk when we’re put in these tough situations,” Iguodala said. “You’re asking us to put our bodies on the line and take more of a financial risk.”

Iguodala hopes that players collectively and individually realize their worth.

For now, Iguodala’s continues, the data stored from last season’s winding road taken into a new one.

Biden Inaugurated as the 46th President Amid a Cascade of Crises