Stewart and her W.N.B.A. peers are playing through the postseason while also continuing their social justice advocacy in the wake of the Breonna Taylor grand jury decision.

In a lot of ways, this has been the W.N.B.A. season Breanna Stewart had hoped for when she plotted her return after rupturing her Achilles’ tendon while playing in the 2019 EuroLeague championship.

Her last season with the Seattle Storm in 2018 had ended with a championship and her being crowned the league’s Most Valuable Player. After a year of rehab and a pandemic-delayed start, Stewart finally got back to her old self: She finished the regular season in a tie as the league’s third-leading scorer (19.7 points per game) and in the top 10 in rebounds and blocks.

But Stewart also entered the so called “wubble” or women’s bubble — the 600-acre sports training campus at IMG Academy in Brandenton, Fla. — as part of a league that wanted to bring attention to violence against Black women by dedicating its season to Breonna Taylor and the #SayHerName campaign. 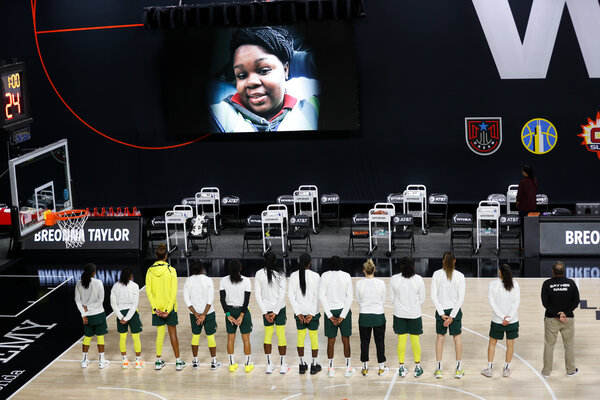 Stewart participated in Black Lives Matter protests alongside her W.N.B.A. peers and voiced her frustration with the slow rate of change when, in late August, the W.N.B.A., along with the N.B.A., Major League Baseball and Major League Soccer each stopped play in response to the police shooting of Jacob Blake in Kenosha, Wis.

“It’s hard to wake up and entertain a country that throughout its history, has not valued Black life,” Stewart wrote on her social media accounts. “Nothing in the world is more valuable than a human life: No basketball game, no nothing.” In the photos that accompanied the post, Stewart and the Storm wore T-shirts that read, “Arrest the Cops Who Killed Breonna Taylor.”

On Sept. 23, the day before Game 2 of the W.N.B.A. semifinals, prosecutors declined to bring charges against the two police officers who shot Taylor.

It was a bracing reminder that even as the year winds down — to the end of her season and to the November general elections — there is still work to be done. Stewart and the Storm swept the Minnesota Lynx out of the semifinals and she will once again play in the W.N.B.A. finals where she will continue to push for societal change through voting.

This interview has been condensed and lightly edited for clarity.

This is going to be a historic season, obviously, because we are playing in the midst of a pandemic. But everything we did on the court to highlight social issues off court? We’ve done a lot and I’m really proud to be here and represent this league.

We’re in a super important time. The census deadline is the end of this month. The voter registration deadline is coming up. We need to make sure everyone is registered to vote. That’s one way to really make a change.

I think the fact is we’re continuing to embrace everything that we can do. We’re not only basketball players, we’re human. We have to fill out our census, we have to register to vote. We have to make an impact in our communities in that way as well, because we can’t be asking other people to do it and not be doing it ourselves.

One thing about the bubble is it’s basketball, 24/7. You can easily get kind of caught up in, you know, focusing too much on basketball or like, ‘I’m not doing this well,’ or ‘what can I be doing better?’ And sometimes I could take a moment and be like, ‘I’m just happy that I’m able to play.’

You know, after sitting out last season and coming back from the Achilles’ injury, I’m happy that I’m able to be on this court. If I miss however many shots? That’s what I miss. But I’m still here and able to shoot them.

Yeah, we’re professional athletes. But we still have our voices, and we still have our opinions, and we have our platforms. It shouldn’t be looked at as something that’s outside of ourselves to speak up on social issues and use our voice where it’s needed to be a voice for the voiceless.

I think the W.N.B.A. has always been at the forefront of this. And, you know, we’re not afraid to speak up and we don’t care if someone doesn’t like us, or doesn’t like what we say. We’re speaking up because that’s what we believe in.

The bubble has been a lot, we’re really severely restricted. We’re fortunate to have our season, but it can wear on you a little bit. And in light of all that’s happening, us trying to stand up for #SayHerName and Black Lives Matter and then seeing what happened to Jacob Blake, everybody is like ‘thank God he is still alive,’ but why is this still happening to the Black community?

It got to be too much. You know, we needed a second to really regroup and just take a pause from the season and what we’re trying to do. And obviously that started with the N.B.A., with the Bucks. We saw them do it.

We were in solidarity with the league, with all the teams, like we have been all season. If someone wasn’t going to play, then none of us were going to play because that’s how we amplify the message.

The N.B.A. guys said this when they were questioning whether to continue or not. “You know, we’re strongest when we’re together.” And that’s the truth. The W.N.B.A. and our platforms are strongest when we’re together. But I think, obviously we can’t be in this bubble forever. But what we’ve done together? I don’t think any of us will forget it, and we’ll continue to be on the same page as far as the messaging that we’re putting out.

As we continue on throughout our careers, there’s going to be things that still need to be brought to people’s attention and highlighted. And I think for us as women, we want equality. And I don’t think we’re asking for too much.

The verdict on Breonna Taylor’s case is frustrating. It’s just sickening news because she deserved justice and she didn’t get it, and her family deserved justice and they didn’t get it, and everyone talks about the settlement but money doesn't have more value than a human life. [Louisville officials agreed to pay Taylor’s family $12 million to settle their wrongful death lawsuit.]

We are not satisfied and we are going to keep going and keep pushing and continue to use our voices, but the biggest way we can create change and make it so this doesn’t happen again is at the ballot box, making sure people are registered to vote, making sure people know who they’re voting into office.

It’s hard to believe that it’s coming to an end. We can see the light at the end of the tunnel.

Obviously, we don’t know exactly when we’re leaving the bubble, but the opportunity to be here and to continue to use our voices and our platform? It’s been historic.

I’ll be going to go home to Seattle and I’m going to make sure that I continue to do my part. I’ll vote and make sure my vote is placed and then go overseas to Russia and continue to be a professional basketball player.