Even with all of the basketball skills that are hyped and parsed at an N.B.A. draft — scoring, 3-point shooting, rebounding, rim protection, playmaking — it was striking to hear television analysts so focused on Immanuel Quickley’s foul shooting last week.

John Calipari, Quickley’s college coach at Kentucky, also mentioned his former player’s foul-shooting skill in a telephone interview the day after the Oklahoma City Thunder took Quickley with the 25th pick, though they had already agreed to send him to the Knicks.

“The kid can flat-out stretch the court,” Calipari said of Quickley’s shooting ability, “score in all kinds of different ways, and is a great free-throw shooter.”

Quickley led Kentucky, and was third in Division I last season, with a 92.3 percent rate from the free-throw line. He missed more than one free throw in a game only once this past season.

But, free throws? Are teams actually picking players because of their free-throw shooting?

Not exactly. After all, Calvin Murphy shot over 90 percent from the line in six different seasons — leading the league twice — in his Hall of Fame N.B.A. career and could still probably make 9 of 10 today. But he is 72 and unlikely to make a comeback. Moreover, you don’t win the Southeastern Conference Player of the Year Award, like Quickley did in 2020, just for shooting free throws well.

A 6-foot-3 guard from Havre de Grace, Md., Quickley was recruited to Kentucky as a point guard, and did some quarterbacking of the offense there. He also played off the ball and led the team in scoring with 16.1 points per game in 2019-20. An average of 4.8 of those points came from the foul line.

Quickley inherited his impeccable free-throw shooting from his mother, Nitrease Quickley, who played at Morgan State in Baltimore. Nitrease Hamilton, as she was known then, led Morgan State in free-throw shooting in both seasons she played for the Bears, shooting 72 percent in her junior season in 1995-96 and 80.3 percent in her senior year. When it came time for a technical foul, she was the one sent to the line.

A teacher for 22 years and now a vice principal in Harford County, Md., Nitrease said she coached her son’s recreation league team from the time he was 6 years old and said that he still has a trophy in their basement for leading the league in free-throw shooting. Nitrease said she had to talk her son out of going to the gym the night he was drafted.

“He said it was time to get to work,” she said in a telephone interview.

Nitrease taught Immanuel to pick out the “W” shape in the net under the rim as a target, to get his arm into the proper 90-degree angle, keep his feet balanced and follow through. She also stressed the need to have a piercing mental focus.

“You have to learn to block out the crowd,” she said. “Immanuel made it clear that he did not hear us cheering in the stands, and when it was time to shoot those free throws, he was focused, and that is one of the biggest keys to his success.”

Indeed, a good deal of pressure can be exerted on shooters standing at the line with ample time for overthinking and for gnawing insecurities to bubble to the surface as an entire arena zeros in on them. But Quickley proved he could handle it.

In February, Kentucky was embroiled in an SEC battle against Mississippi State, but Quickley drilled eight straight free throws in the final 47 seconds to help the Wildcats hold off the Bulldogs (he made all 14 of his free-throw attempts that night). 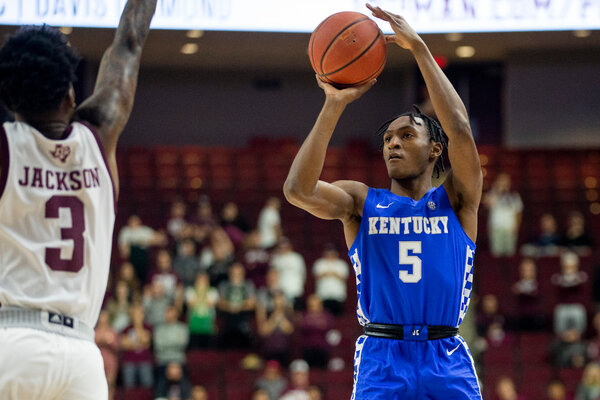 There is at least one recent example of a good free-throw shooter from Kentucky going on to later success. Quickley’s free-throw percentage last season was the second best in Kentucky history, behind only Tyler Herro, who shot 93.5 percent from the line in 2018-19. A year later, Herro was the breakout star of last season’s N.B.A. finals run for the Miami Heat, providing 3-point shooting.

Quickley’s percentage at the foul line last season was higher than the best college seasons from the best free-throw shooters in N.B.A. history. At the top of that list was Golden State’s Stephen Curry, who shot 89.4 percent in his best year at Davidson.

Missing free throws is like flushing away easy points. If Shaquille O’Neal had shot 70 percent from the line over his career instead of 52.7 percent, he would have averaged 25.3 points per game instead of 23.7.

The Houston Rockets’ James Harden has led the N.B.A. in free-throw attempts seven of the past eight seasons. If he shot them as well as Quickley last year, he would have averaged 35 points per game instead of 34.3.

To get to the line consistently like Harden, a player must be an offensive threat and draw contact. Quickley did it as a sophomore after a disappointing freshman year, and then a slow start to the most recent season.

“I was able to get through that in Kentucky,” he said in a video news conference after, “so I feel like I can accomplish anything that comes my way.”

As for the N.B.A., Quickley does the things that are most coveted in today’s league, Calipari said, particularly driving into the lane without needing the help of a screen. Quickley also led the Wildcats with a 42.8 percent 3-point rate, so teams will have to honor his shooting, which is what Calipari meant by stretching the court.

The Knicks could use the help, too. They ranked 27th out of 30 N.B.A. teams in 3-point shooting, and were dead last in free-throw percentage.

Calipari also said that whatever the Knicks project for Quickley as a professional, he will eventually exceed it because of his persistence and maturity, which Calipari attributed to Quickley’s family.

“If you have a good enough base, when things go wrong you don’t let it rock your world,” Calipari said. “He’s going to be able, even with setbacks, to keep climbing.”

Will New York ever be New York again?