Shane Bieber was working on a shutout with two on and two outs in the bottom of the eighth inning on Thursday night in Detroit. The Cleveland Indians led by 10 runs, and Bieber had thrown more pitches than he had in any game this season. Sandy Alomar, the Indians’ acting manager, met with Bieber on the mound.

“He gave me the option,” Bieber said later. “He said, ‘If I let you go get this guy, you’re going to be up around 120, so you’d better get him.’ I said, ‘Absolutely.’ Obviously it didn’t play out that way. Baseball is baseball. It’s frustrating.”

For Bieber, the best pitcher in the majors this season, frustration is relative. Yes, the Tigers’ Willi Castro wrapped Bieber’s 118th pitch that day around the right field foul pole for a three-run homer. But Bieber recognized what really mattered: He had won the game, as usual, and stopped Cleveland’s eight-game losing streak.

“We kind of righted the ship today, and that’s what’s most important,” he said.

Bieber’s earned run average is 1.74, the best in the American League. He leads the majors in wins (8) and innings (72 ⅓), and his 112 strikeouts far outpace his peers; the closest pitcher, the Yankees’ Gerrit Cole, has 87.

Bieber has one start remaining in this 60-game regular season, unless the Indians need him to help clinch a playoff spot on the final day. That seems unlikely; Cleveland held the seventh of the A.L.’s eight playoff seeds through Thursday, barely ahead of Toronto but five games ahead of ninth-place Seattle.

Another race is clearly over: Bieber, a 25-year-old right-hander in his second full season, will be the runaway Cy Young Award winner. Even after trading the star right-handers Trevor Bauer and Mike Clevinger in the last 14 months, the Indians have an ace to spare.

“I can relate it exactly to Cliff Lee back in ’08,” said Jensen Lewis, an Indians television analyst who was teammates with Lee when he won the award that season. “There was just a laser focus from the first pitch he threw in spring training. He didn’t have the strikeouts-per-nine that Bieber does this year, but there was no start where you thought, ‘They’re going to get to him today.’ It’s been the same with Biebs.”

Bieber averages more than six strikeouts per walk, as Lee did in his prime, but no starter has ever fanned as many batters per nine innings. Using Bieber’s 11 starts as a minimum, his 13.94 strikeouts per nine would be a major league record.

Of course, everything about 2020 must be viewed in context: Because of the coronavirus pandemic, this will be the shortest regular season since 1878. But the Baseball Writers’ Association of America will still present its annual awards, and Bieber would become the fifth Indians pitcher to win a Cy Young, after Gaylord Perry (1972), CC Sabathia (2007), Lee (2008) and Corey Kluber (2014, 2017). 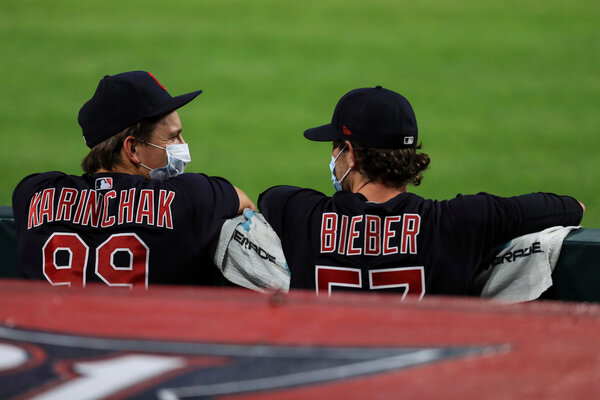 For now, Bieber insists, he has not thought much about it.

“Not too much, honestly,” he said. “I like to keep things pretty simple. I try and never look behind me and always look forward. Baseball is a humbling sport, so as soon as you start thinking about accolades and this and that, I feel like it’s going to come and bite you.”

With the Indians, it is always best to take nothing for granted. The team has not won the World Series since 1948, the majors’ longest active stretch of futility. Cleveland’s best teams — the 1990s juggernaut that won five division titles and two A.L. pennants — could have used a pitcher like Bieber.

“We didn’t have guys over and over like Kluber and Bieber and Clevinger and Bauer; we had to fight it out from 1 to 5,” said Alomar, the catcher for that team. “We didn’t have a No. 1 guy, per se, other than Charles Nagy when he was in his prime. We competed mostly with the bullpen, a few No. 3 or No. 2 starters, and a great offense.”

“It’s not a guarantee; you’ve got to score some runs, too,” Alomar said. “But it’s always good to have a great pitching staff on your side when you go to the postseason.”

These Indians often struggle to score, but they will take their chances this fall with a pitching staff that has a 3.25 E.R.A., second lowest in the majors (trailing only the Los Angeles Dodgers, at 2.98) through Thursday. If Bieber starts the opener of the new best-of-three first-round series, he could easily push a team to the brink of elimination.

He does it by expertly mixing his fastball, curveball, slider, cutter and changeup, baiting hitters to swing at pitches outside the strike zone. Bieber’s fastball averages 94.7 miles per hour, according to Fangraphs, but he keeps hitters guessing by using it judiciously.

Of the 15 starters who average 94 m.p.h. with their fastballs, only one — the Chicago Cubs’ Yu Darvish — throws it as infrequently as Bieber, who uses it about once every three pitches. Hitters can rarely guess what is coming, and strain to see it.

“He’s hides the ball for probably as long as any starting pitcher,” Lewis said. “So when he’s able to run it from 94 to 96 and then command everything, you have no time to decide what you want to do as a hitter. It’s almost impossible to pick the ball up until it’s on top of you.”

Bieber was named most valuable player of the All-Star Game in Cleveland last summer, earning a Chevy Silverado for pitching one inning and striking out the side. It was a small sample, to be sure, but it was no fluke. His next award will also recognize just a sliver of dominance, but it will be well-earned.