Luis Suárez had already been made a scapegoat, blamed for all that had gone wrong at Barcelona. He had already been rejected, told bluntly by the club’s new coach, Ronald Koeman, that his services were no longer required.

He had been forced to sit alongside the president who had precipitated it all and say thank you for having me, even as the thought of being forced to go brought him to tears. Worse, though, was still to come, a final indignity in his summer of humiliation.

On Sept. 17, Suárez touched down in the Italian city of Perugia to considerable fanfare. The airport where he landed put out a statement celebrating his arrival. His progress to the city’s University for Foreigners was accompanied by a crowd of fans and photographers. Even the university thanked him for gracing its halls.

His stay was to be brief. Suárez was there to sit for an Italian exam. His wife, Sofía Balbi, is of Italian descent, making her husband eligible for citizenship, providing he could demonstrate competency in the language. 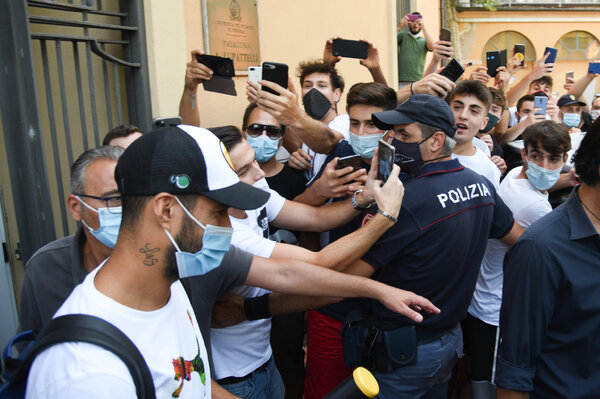 It was something he had been planning for at least a year, he would say later, but at the time his motivation seemed much more immediate: Juventus was offering Suárez a swift exit from Barcelona, but could not employ any more players from outside the European Union. Suárez’s getting an Italian passport was the key to the transfer. A few minutes after arriving, he left. He had passed the test.

That, though, was only the beginning. A few days later, the Perugia prosecutor’s office and the Guardia di Finanza, part of Italy’s mosaic of law enforcement agencies, announced that they were investigating “irregularities” in the exam. Suárez, they suggested, had been informed of the questions beforehand, and been asked only to do the oral portion of the test.

The university was accused of agreeing to give him an intermediate grade — enough to pass — before he had taken the test. Juventus, the prosecutors would later claim, had sought to exert pressure “at the highest institutional levels” to accelerate the process. A phone call from his Italian tutor to one of the examiners had been intercepted, revealing that she admitted Suárez could not “utter a word” of Italian.

Though both the university and Juventus deny any misconduct, and Suárez himself was never accused of wrongdoing, the reputational damage was nevertheless substantial.

He has, of course, long been used to being cast — often rightly — as a villain. As his summer descended through tragedy and all the way on into farce, though, his image shifted again: unwanted by Barcelona; accused of cheating in an exam; and at 34, while still one of the most talented strikers of his generation, condemned to play out the coda to his career as a figure of ridicule.

That is not quite how things have worked out. Suárez did not end up signing with Juventus. Instead, freed from his Barcelona contract, he joined Atlético Madrid. Barcelona’s hierarchy would have preferred to see him leave for Italy or France — Paris St.-Germain was interested, too — rather than for a direct rival. There was some trepidation that the executives might come to regret the move. Even they, though, could not have predicted quite how much.

As he prepares to lead Atlético’s line against Chelsea in the Champions League on Tuesday night, Suárez is in “one of the best moments of his career,” as the Atlético president, Enrique Cerezo, put it.

He has scored 16 goals in 20 La Liga games for Diego Simeone’s team. Atlético sits atop the Spanish table, with a three-point lead and a game in hand on the second-place Real Madrid. Thanks in no small part to Suárez, Atlético is dreaming of its first league title since 2014, and only its second this century. He has, in the first six months of his Atlético career, proved one thing beyond doubt. “Luis Suárez is not old,” Cerezo said.

Simeone, certainly, never believed that he was. He had admired the Uruguayan for some time — he had hoped to sign Suárez while he was still with Liverpool, calling his performances in England “extraordinary” — and, when it became clear Barcelona was prepared to jettison him, Simeone urged Atlético to make its move. Cerezo and the club’s executives did not take much persuading. “When a player of his quality is available, you have to try,” Cerezo said.

When coach and player first spoke by phone, Simeone detected “the energy, the hunger, the defiance” that have not only characterized Suárez, but that also were Simeone’s finest attributes as a player. Most of all, though, Simeone felt that Suárez had something to prove. “He had a desire to show that he is still relevant,” the coach said.

It is tempting to ascribe Suárez’s form in Madrid to the re-ignition of that inner fire. He has always, after all, given the impression that he is at his best when he has something or someone to rage against, whether it is an opponent, an authority or, in this case, simply the dying of the light. “Some did not believe I was still capable of playing at the top level,” Suárez said this week.

And yet it is possible, too, to believe that the opposite is true: that Suárez has found himself again not in war, but in peace.

His former international teammate Sebastián Abreu told the Spanish newspaper El País this week that he believed Barcelona had, in Suárez’s final year with the club, “mounted a campaign where they identified Luis as the problem with everything, together with Lionel Messi.” Suárez, judging by his public comments, seems to agree with that assessment.

With Atlético, by contrast, he has not only encountered a coach who — as Abreu put it — “knows perfectly how to treat a player,” he has also found a club that is not “blaming Suárez for every situation, and so that has liberated him to enjoy playing soccer completely.” Without battles to fight off the field, he has been able to dedicate himself once again to winning them on it.

Just as crucially, he has found himself on a team prepared to offer him the support he needs to do so. Just as Atlético has revived Suárez, so he has revived Atlético. Simeone had always regarded Suárez as the finest pure striker in the world, but he was aware that he was, in his mid-30s, no longer able to play on the counterattack quite so devastatingly as he had, say, with Liverpool in his mid-20s.

In order to restore Suárez to his former grandeur, then, Simeone dispensed with the counterpunching approach that had long characterized his tenure at the club. In its stead came a more possession-oriented, high-pressing style, one designed to get more players closer to Suárez, and the ball to him in the areas where he could do the most damage. “The team is accompanying him, so that he can become the best version of himself,” Simeone said. “And that is scoring goals.”

Even for someone, like Simeone, who never doubted Suárez’s ability — who never mistook the ticking of a clock for the tolling of a bell — there is still the occasional surprise.

Late in January, the Atlético coach found the striker lingering on the training field, practicing free kicks with a couple of teammates, Thomas Lemar and João Félix. Simeone, sensing an opportunity to set Suárez a challenge, remarked that he had not seen him score from set pieces all that often during his career.

A few days later, Suárez lined one up in a game against Cádiz. He was about 30 yards from goal. He whipped the ball into the top corner. Suárez had passed that test, too.

Coronavirus: How an Indian wedding and funeral infected 100

U.S. warns Taliban that level of violence 'not conducive' for peace process