One can easily call the Milwaukee Bucks’ performance against the Nets on Monday night an embarrassment.

It was, after all, a 39-point drubbing, and gave the Nets a commanding 2-0 lead in their Eastern Conference semifinal series. The 125-86 win was the largest in the Nets’ playoff history, and their biggest margin of victory all season.

Kyrie Irving hit a 3-pointer to open the game. Soon, the Nets’ lead was 10 points. By the end of the first quarter, it was 17. And then the floodgates opened. At one point, the lead grew to 49.

The Bucks had no answers. Their fans couldn’t even blame the referees for letting the game get out of hand: The Nets shot only seven free throws. They simply scored whenever they wanted.

“We didn’t play very well overall,” Mike Budenholzer, the Bucks coach, said in a stone-faced understatement. “First quarter. The whole game. Yeah, so, I think we’ve got to play better from start to end.”

Keeping the score closer might have been merely a cosmetic gesture, though. The Nets are the superior team, both in talent and in execution. And they have dominated both games of this series while missing James Harden, one of the best offensive players in the league.

Unlike most teams the Nets play, the Bucks have a counterpoint for Kevin Durant, Kyrie Irving and Harden: a dominant former most valuable player of their own in Giannis Antetokounmpo. Antetokounmpo played well in the opening game of this series, scoring 34 points on 24 shots and grabbing 11 rebounds. The problem for Budenholzer and his team is that the Nets just brushed it off. It is not a great sign when a team’s star plays like a star, when the opposing team loses one of theirs to injury, and the games are still not competitive. 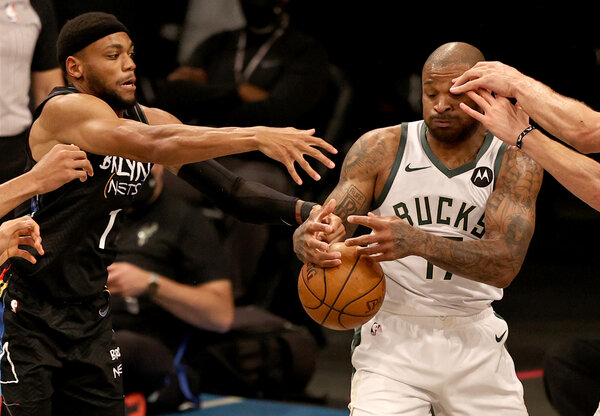 The Bucks have been vexed by Durant in particular, their inability to stop him traced to one important advantage: Durant has no weak spots as an offensive player. Defenders can’t force him left or right for a more advantageous position because he can score from anywhere on the floor.

P.J. Tucker is stronger than Durant. Antetokounmpo might be taller. Jrue Holiday is quicker. All three are excellent defensively, and all three have taken their turns trying to guard him. Durant had counters for all of them. When he is single-covered, he easily got around bigger defenders with his exceptional ball handling. Against smaller ones, he merely shot over them. When the Bucks double-teamed him, Durant slipped passes to teammates like Joe Harris or Irving.

On Monday, Durant finished with 32 points and 6 assists in 33 minutes. He was mesmerizing. Unguardable.

All is not lost for the Bucks. If there is one way for them to keep these games close, it could be by hitting their 3’s.

The Bucks have been dismal from deep so far, shooting 24.5 percent combined in the first two games of the series — almost 15 points lower than their regular-season average.

Meanwhile, the Nets shot a whopping 50 percent on 3-pointers on Monday night, after making 38.5 percent in Game 1.

If Milwaukee can find something approximating its regular-season form, it will open up the paint for Antetokounmpo. This may require more minutes for Bobby Portis and Bryn Forbes, bench players who can shoot, and starting Antetokounmpo at center, to allow for more perimeter quickness.

And the Bucks can take some lessons from the Nets’ only postseason loss so far: Game 3 of their first-round series against the Boston Celtics. The overmatched Celtics stole a win that night, even as Durant and Harden had strong games, because they shot 16 of 39 (41 percent) from behind the arc, which allowed them to keep pace late in the game.

Of course, Jayson Tatum, the Celtics star, helped quite a bit by scoring 50 points. Milwaukee is going to need nights like that from Antetokounmpo, who had difficulty getting into an offensive rhythm on Monday. The Bucks are not going to win many games with Antetokounmpo, their best player, shooting only 15 times.

“I’ve got to be more aggressive and get to my spots more,” Antetokounmpo acknowledged after the game. “That’s pretty much it.”

Not quite. It’s not necessarily only a question of aggression. There were far too many possessions Monday on which Antetokounmpo put his head down and tried to drive into a wall of defenders. Aggression without a Plan B leads to 39-point losses. Antetokounmpo needs to get the ball in different spots and not just bring it up as the team’s de facto point guard.

But all the adjustments in the world won’t close the talent gap between the two teams. It’s not just that Durant and Irving are outclassing the Bucks’ top players. It’s that the rest of the Nets roster — even role players like Bruce Brown and Mike James — are playing some of their best basketball of their season at the right time. And to make matters worse for Milwaukee, the Nets might get the injured Harden and Jeff Green back for Game 3.

Short of the Nets forgetting what time that game is on Thursday, the Bucks could be in for more of the same.

The view in Pennsylvania: Democrats are confident, even as the Trump team considers legal challenges.

Christmas spending warning: If you can’t pay for it upfront, you can’t afford it