After seven days restricted to a hotel room as part of a 14-day quarantine ahead of the Australian Open, it’s fair to wonder if paranoia has entered like a stealth intruder. Are the thumps and thwacks my version of Edgar Allan Poe’s beating heart?

Thank goodness, no. The player in the room directly above is practicing footwork drills. The player directly next door is hitting balls against our shared wall.

This is what final preparations for this year’s Australian Open look and sound like for more than three dozen players forced into a hard 14-day lockdown after people on their chartered flights tested positive for coronavirus after arriving in Melbourne.

The other athletes lucky enough to have traveled with nobody who tested positive? They get five hours outside their rooms each day to practice, train and eat. 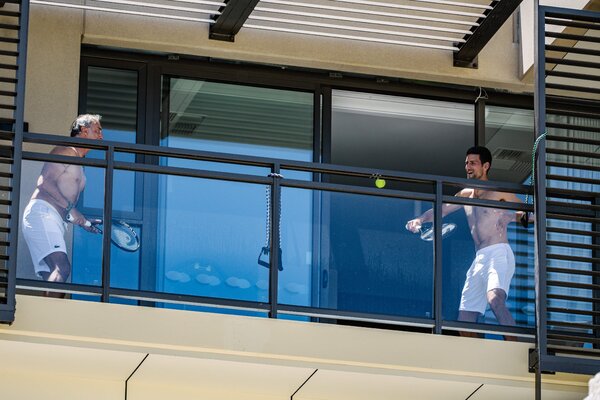 Playing a Grand Slam tennis tournament in a country that has managed to contain the coronavirus – and wants to keep it that way – was always going to require the fearlessness of Rafael Nadal and the ingenuity of Hsieh Su-wei. If, in addition to singles and doubles, this year’s tournament were to add another category – suites – the hands-down favorites would be Pablo Cuevas of Uruguay and Yulia Putintseva of Kazakhstan.

To practice his groundstrokes, Cuevas has turned a spare bed into a vertical backboard.

Once he is finished, he converts the bed to … a surfboard.

Putintseva has created a doubles-alley-sized course in her room.

She set up plastic cones to complete her cardio-blast agility drills.

But at one point, her self-isolation was breached by a Melbourne mouse, prompting a change in rooms. (She had to change rooms again because of a second mouse.)

Creativity, unlike the quarantined players, knows no boundaries. Tennys Sandgren of the United States demonstrated on his social media feed how to get double the fun out of an exercise bike, taking hold of the one in his room to whip out a set of clean-and-jerk lifts.

Switzerland’s Belinda Bencic affixed rectangles made of tape across her picture window and directed forehands and backhands at the small targets.

‘Having a laugh!’ Verhofstadt mocked after claiming EU is ‘global power’ in Turkey rant