Some have referred to this era as a golden age of better and better times. But a deeper look at the data shows the simple shorthand conclusion is incomplete. 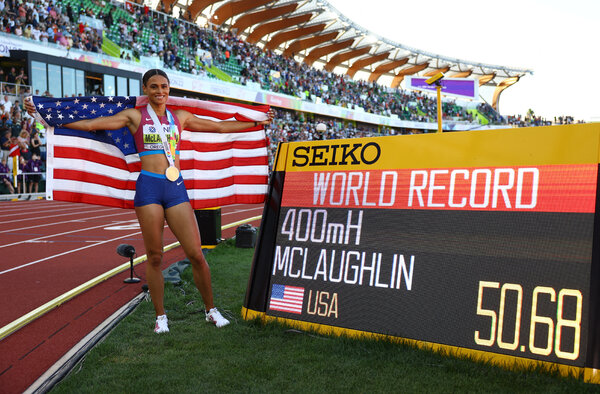 By Kevin Draper and Francesca Paris

The highlight of the track and field world championships, which wrapped up in Eugene, Ore., on Sunday, was undoubtedly Sydney McLaughlin’s shattering her own world record, and the rest of the field, in the 400-meter hurdles. It was a record set in dominant fashion, the type of performance fans watch sports for but rarely actually get to see.

World-class runners compete on two different planes simultaneously. They are trying to beat one another, but they are also chasing ghosts and trying to run faster than anyone ever has before.

We are in what some have referred to as a golden age of people running fast, with records across the spectrum being broken, and more people than ever — from elite professionals down to high schoolers — running times that would have previously been unheard-of.

One small example: At last summer’s Tokyo Olympics, Rai Benjamin of the United States ran the 400 hurdles in 46.17 seconds, which was faster than any man had run before. Unfortunately for Benjamin, Karsten Warholm of Norway, in the lane next to him, had finished 0.23 of a second faster, setting a world record that still stands.

The records are falling largely from a combination of better training and technique as well as, perhaps most important, the accelerating use of high-performance sneakers across disciplines.

Yet there are still interesting variations, especially at the top of the sport, where records are falling fastest.

No engine problem for Charles Leclerc in Baku, just forgetfulness