The referee Zach Zarba had spent, by his count, roughly 23 nights a month away from home during the N.B.A.’s regular season for the past 17 years. Then the coronavirus pandemic hit, and the league suspended its season in March.

It was, in a way, a welcome shock to the system for Zarba, 45, who quarantined in Brooklyn with his wife, Christiane, and their two children, Jackson, 8, and Jordan, 6.

But Zarba couldn’t simply sit around with his newfound free time waiting for games to resume. Just like the players he whistles on the court, he had to stay in shape for all the running he has to do during games — much more than officials in most other sports. He exercised at home and ran the 3.35-mile loop in Prospect Park. Zarba said N.B.A. officials are weighed three times a year.

He and the other referees also watched N.B.A. game video often to try to keep their eyes sharp. Players and coaches are sometimes given the benefit of the doubt when it comes to rust after inactivity. Not so much referees. Zarba has officiated more than 1,000 regular-season games after joining the profession in part because of his father, who was a baseball umpire in Brooklyn.

“It’s a great job,” Zarba said. “You have the best seat in the house. Every night, your job is never the same.”

The games inside the N.B.A.’s bubble at Walt Disney World near Orlando, Fla., have provided a new set of challenges for officials, who are calling games in mostly empty arenas, meaning they hear every bit of chirping from benches that would normally be drowned out by crowd noise.

“It’s like a rec league game, but you’ve got the best players in the world here,” Zarba said.

He is one of the 18 referees still in Florida for the N.B.A.’s conference finals, and he spoke by Zoom about his career, life in the bubble and reading social media to stay on top of player drama.

This interview has been condensed and lightly edited for clarity.

So in your job, on your best day, you get yelled at by your colleagues, thousands of fans, not including the people sitting at home on their couches. You could do your job 99 percent well, but the 1 percent will spawn articles criticizing you, written by jerks like me. Help me understand why being a professional referee is appealing.

I think first you have to have the love of the game. You have to be a hoops junkie. You have to discover the profession first, which can be kind of hard because nobody thinks about officiating. Everyone wants to play or coach. For me, it was discovering the craft and the profession, and then when you try, it’s something that you either love or you hate it.

Was there rust when the season resumed?

Yeah, I think that would be expected. And there was, I think. The N.B.A. ramp-up was probably about three weeks or so. We had a week of training camp and then two weeks of scrimmages. I think that’s where the rust showed for us.

Do you think you officiate differently when there are fans?

I’m not sure. I’ve gotten questions about, “Well, you can hear more so you can call more fouls.” We’re not trained that way. We’re trained to get the open angle and when you don’t have an open angle, somebody else does. Trust your partner. The person who can see it should call it.

Do you read social media? Do other refs? If so, I apologize. I didn’t mean it.

I do read social media. In terms of just knowing our league, I think it’s important. I don’t read social media about myself. We pay attention to social media just so you can know what’s going on in your league. You need to know if a certain player has a problem with somebody else.

I just want to clarify: You keep track of player beefs entering a game? 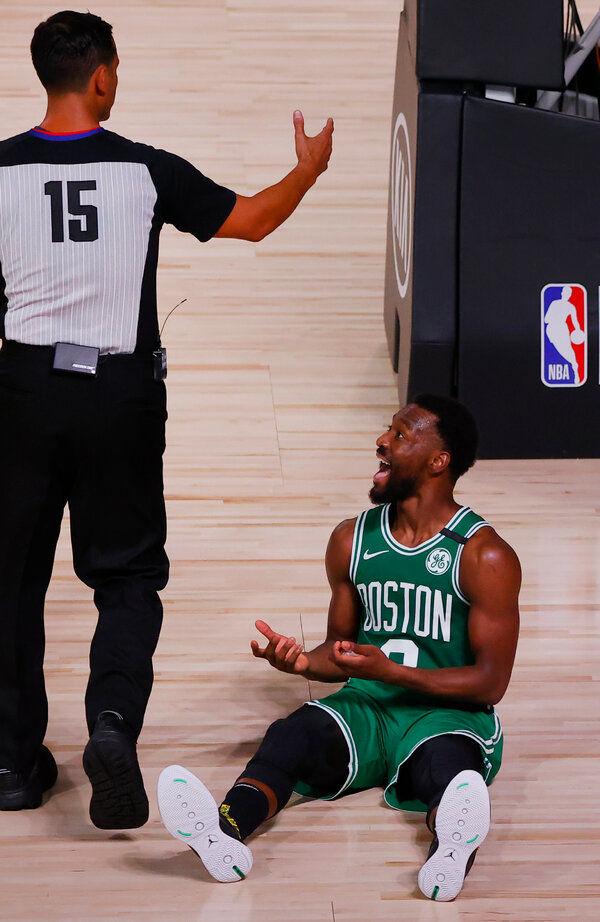 How has replay changed your job?

We look at it as, if 20,000 screaming fans can know, in two seconds, if the ball was released in time on a last-second shot attempt, then the three people charged with doling out the rules of the game, we should have access to that technology.

When refs blow calls, what are some of the most common reasons?

Probably positioning. There’s usually something in your positioning when you don’t get the angle.

How does it feel when your call is overturned?

When you are clearly wrong, and now that has been overturned, you feel a sense of relief. We try to take the ego out of it. Your job is to be a steward of the game.

Do superstars get more leeway?

I would disagree and go the other way and I would say that the majority of superstar players in our league don’t get all the calls and don’t get as many whistles as they deserve.

They would agree with you.

They would agree, correct. They actually finish a lot of plays at the rim and are so strong and so fast — and the hand is quicker than the eye — that there are things you go back and later on, you go: “Wow, you know what? He did get fouled.”

Is there a good story you have from your time as a referee?

It must have been my first year in the league. My “welcome to the N.B.A.” moment. I’m reffing a Lakers game and it’s Kobe Bryant. Kobe in 2003, 2004, was younger and brash. He was chasing a legacy. He was a great player and intense. I remember there was one game and Kobe asked about a play. He thought he got fouled on the elbow shooting a jumper. He barked about it.

The culture of the N.B.A. is that, for us, if a play in question happens in the first half, you can kind of go in at halftime, look at the play, you can come back and either tell them, “Yeah, you were right,” or “No, you were wrong.” Sure enough, Kobe got fouled and I missed the play, and it should’ve been a foul.

When you tell a player and you drop your guard and say, “Hey, I missed that play,” 90 percent of the time the player is going to say: “Hey, don’t worry about it. You’ll get the next one.” That’s the kind of working environment. I come back out and walk up to Kobe and say: “Kobe, you were right. You did get hit on the elbow.” He looked dead at me and I’m expecting a pat on the butt or whatever. He looked at me stone-faced and said, “Get it together.”

COVID-19: Why meeting final lockdown roadmap target may not mean the end of debates about our freedoms