EDMONTON, Alberta — The injuries keep piling up, but the Dallas Stars are still alive.

The goal was Perry’s second of the night in the 3-2 win at Rogers Place. Joe Pavelski also scored for Dallas, while Ondrej Palat and Mikhail Sergachev had the goals for Tampa Bay.

“It’s obviously not the outcome you want,” said Victor Hedman, a favorite for the Conn Smythe Trophy as playoff MVP, who logged a team-high 36:03 of ice time as Tampa Bay squandered its first opportunity to clinch the Stanley Cup. “It wasn’t our night. They scored.”

The Lightning now lead the series 3-2. They’ll get a second shot at the championship in Game 6 on Monday from Edmonton.

Pavelski forced overtime when he tied the game 2-2 with 6:45 left to play in the third period. Nine seconds after a high-sticking penalty to Tampa Bay’s Erik Cernak expired, Pavelski scored his 13th of the playoffs, beating Andrei Vasilevskiy by converting a rebound after a point shot from Miro Heiskanen. 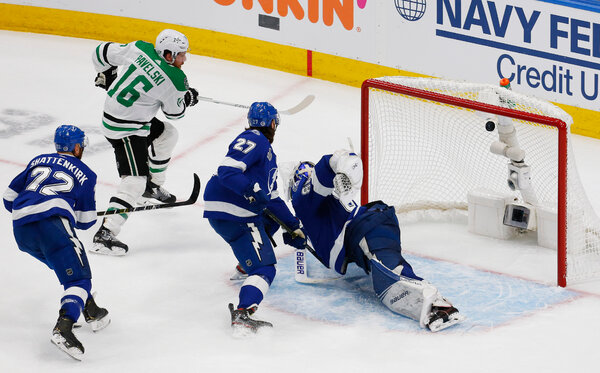 The Lightning controlled play for most of a hard-fought first overtime period. After the intermission, the Stars came out with increased aggression. It paid off when Perry fed the puck out to John Klingberg high in the zone, then went to the net to pick up the loose puck and finesse it around the outstretched toe of Vasilevskiy, ending the game.

“You can’t be afraid to lose,” said Dallas Coach Rick Bowness. “We were playing not to lose, and we talked about it after that first overtime. We’ve got to play to win. Let’s go at them, let’s get back on our toes and get skating again.”

“We had our chances,” said Lightning Coach Jon Cooper. “A couple of lost battles down low cost us on a couple of goals.

“I thought we played well enough to win the game,” he added. “I’m sure they are saying the same thing. That’s what happens in double-overtime games.

“Good on them for not rolling over,” Cooper continued. “We have to circle the wagons and come back and do it again.”

As the Lightning have closed in on the Stanley Cup, there has been lots of talk about how they have added more character and leadership to their roster after being swept in the first round by the Columbus Blue Jackets last year.

The Stars went a similar route after they were eliminated in double overtime of Game 7 of the second round by the eventual Stanley Cup champions, the St. Louis Blues.

“I give Jim Nill and his staff a lot of credit,” said Bowness, referring to the Stars’ general manager. “We get to this point in the playoffs, we need some experience, it needs some guys that have been there and are not intimidated by the situation we’re in. Corey Perry’s one of those guys, a huge addition to our team.”

“The biggest switch for us tonight was those guys talking in the dressing room about having to go for this,” said Tyler Seguin, who finished the night with three assists. “We can’t be sitting back and hoping to win. I think that’s what you saw, the change to the second overtime where we started going after them.”

In an effort to generate more offense — and to accommodate his growing list of injured players — Bowness juggled his lines before Game 4 on Friday night. Playing with Seguin and Joel Kiviranta, Perry scored his first goal in 19 games in Friday’s 5-4 overtime loss before adding two on Saturday.

Bowness has admired Perry’s tenacity for years, even from opposing benches.

“From the top of the circles down, in the offensive zone — his poise, his confidence, his strength and his reach with the puck, it’s always been very impressive,” he said of Perry.

Throughout the playoffs, the Stars have been weathering injury issues. Most notably, Anton Khudobin capably stepped into the net when Ben Bishop was deemed unfit to play, and the unheralded rookie Kiviranta helped the Stars advance to the Western Conference Final with his hat-trick performance in Game 7 against the Colorado Avalanche, when the durable Andrew Cogliano was sidelined.

In later rounds, Radek Faksa was injured midway through the Western Final; he has now missed seven games. Three games ago, another important two-way forward, Blake Comeau, was knocked out of action. And in Game 4 on Friday, Roope Hintz left the game and did not return.

Jason Dickinson also missed some time in the first period of Game 4 after blocking a shot. He left the ice early during warm-up on Saturday, but stayed in the lineup and finished with 23:14 of ice time. Defenseman Andrej Sekera also left the game midway through the first period after blocking a shot from Sergachev. He returned for the third period and overtime, finishing the night with 13:38 of ice time.

“Give him a lot of credit,” Bowness said. “He took a shot and he was in a lot of pain. It took a while to subside. That shows you his compete, his love of the team and his teammates.”

The Lightning were without captain Steven Stamkos, who missed a second-straight game after scoring a goal in his first postseason appearance, in Game 3.

Sekera’s absence meant that Dallas’ two top defensemen had to shoulder an extra heavy load on a rare back-to-back in the Stanley Cup finals — the first ever to feature two overtime games. Klingberg finished the night with 37:51 of ice time while Heiskanen had 37:03.

After Perry opened the scoring with 2:08 to play in the first period, Palat tied the game in the second when he accepted a pass from Kucherov, then cut across the crease and deposited the puck in the far side of the net, past a sprawling Khudobin. With Point drawing the second assist, the three linemates all extended their point streaks to four consecutive games. Sergachev gave the Lightning its first lead of the game early in the third, with a slapshot from the left point, before Pavelski forced overtime.

Penalties have been a key talking point through the first four games of the Stanley Cup finals, but the referees put their whistles in their pockets on Saturday. Just three minor penalties were called, and all five goals came at even strength.

Unwelcome in US – and at home: Deported Guatemalans face threats