In 1966, the writer Paul Theroux was in Uganda at a time of curfew and violence. It shaped his thinking about travel writing’s imperative to bear witness. 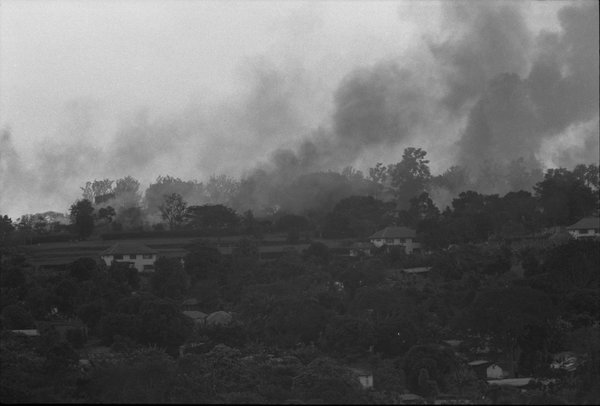 In this season of infection, the stock market little more than a twitching corpse, in an atmosphere of alarm and despondency, I am reminded of the enlightenments of the strict curfew Uganda endured in 1966. It was, for all its miseries, an episode of life lessons, as well as monotonous moralizing (because most crises enliven bores and provoke sententiousness). I would not have missed it for anything.

That curfew evoked — like today — the world turned upside-down. This peculiarity that we are now experiencing, the nearest thing to a world war, is the key theme in many of Shakespeare’s plays and Jacobean dramas, of old ballads, apocalyptic paintings and morality tales. It is the essence of tragedy and an occasion for license or retribution. As Hamlet says to his father’s ghost, “Time is out of joint.”

In Uganda, the palace of the king of Buganda, the Kabaka, Mutesa II — also known as King Freddie — had been attacked by government troops on the orders of the prime minister, Milton Obote. From my office window at Makerere University, where I was a lecturer in English in the Extra Mural department, I heard the volleys of heavy artillery, and smoke rising from the royal enclosure on Mengo Hill. The assault, led by Gen. Idi Amin, resulted in many deaths. But the king eluded capture; he escaped the country in disguise and fled to Britain. The period that followed was one of oppression and confusion, marked by the enforced isolation of a dusk-to-dawn curfew. But, given the disorder and uncertainty, most people seldom dared to leave home at all.

The curfew was a period of fear, bad advice, arbitrary searches, intimidation and the nastiness common in most civil unrest, people taking advantage of chaos to settle scores. Uganda had a sizable Indian population, and Indian people were casually mugged, their shops ransacked and other minorities victimized or sidelined. It was also an interlude of hoarding, and of drunkenness, lawlessness and licentiousness, born of boredom and anarchy.

“Kifugo!” I heard again and again of the curfew — a Swahili word, because it was the lingua franca there. “Imprisonment!” Yes, it was enforced confinement, but I also felt privileged to be a witness: I had never seen anything like it. I experienced the stages of the coup, the suspension of the constitution, the panic buying and the effects of the emergency. My clearest memory is of the retailing of rumors — outrageous, frightening, seemingly improbable — but who could dispute them? Our saying then was, “Don’t believe anything you hear until the government officially denies it.”

Speaking for myself, as a traveler, any great crisis — war, famine, natural disaster or outrage — ought to be an occasion to bear witness, even if it means leaving the safety of home. The fact that it was the manipulative monster Chairman Mao who said, “All genuine knowledge originates in direct experience,” does not make the apothegm less true. It is or should be the subtext for all travelers’ chronicles.

Coronavirus: Guidance counsellers one call away for New Brunswick students