Skinning wood pigeon? Cutting up rabbit? At a course designed to teach butchery and foraging, a writer feels closer to the primal experience of cooking — and eating. It’s a sensation more travelers are looking for. 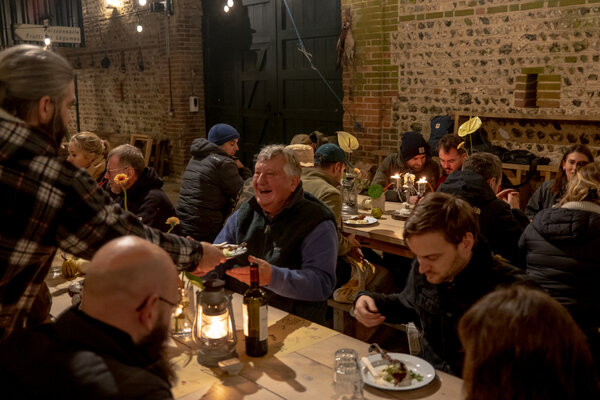 In the Before Times, a classic whip-up-three-courses-in-a-pastoral-location type of cooking class was enough.

No longer. Courses that involve getting your hands down and dirty with ingredients are becoming more popular with travelers who are looking for culinary experiences that feel more primal — less sautéing in the foothills of Florence and more grinding farce for sausages. Part of the allure is a deeper connection with food: They are looking for transparency about where and when products are harvested and how to source them so that they consume fewer plastic-wrapped foodstuffs of unknown origin.

While there are no hard numbers on the trend, Emily Fitzroy, the owner of Bellini Travel, which specializes in Italy, has seen a spike in requests to learn a culinary skill while on vacation. “Clients want to return home with newfound knowledge,” she said. Among the trips she’s recently booked: a deep dive into the world of offal.

Another tour operator, Black Tomato, is creating hands-on “culinary moments” that deliver a greater understanding of the origins of food by going directly to the source. One possibility is an afternoon on a traditional 40-foot schooner in the Lofoten Islands of Norway, where participants catch, clean and prepare cod, a vital source of revenue for the area.

And Hank Shaw, a James Beard Award-winning chef, cookbook author and outdoorsman, offers three-day culinary hunts in Oklahoma, through his company, Hunter, Angler, Gardener, Cook, and in partnership with Larry Robinson of Coastal Wings Guide Service. In addition to hunting, the experience includes learning skinning, plucking and other aspects of prepping game, including waterfowl, so that participants no longer need to rely on commercial processors. The $2,000 hunts (which include lodging, hunting and chef-prepared meals) are announced in Mr. Shaw’s newsletter and, these days, sell out in 48 hours.

My quest for a deeper food experience led me to Nick Weston, whose cooking courses in rural Sussex, England, involve game butchery and other adventures with wild food.

A modern-day hunter-gatherer, Mr. Weston, 41, studied Mesolithic cultures and archaeology in college, worked as a freelance chef, did a three-month stint in the South Pacific as a “survivalist expert” for the British reality show “Shipwrecked” (a U.K. iteration of “Survivor”) and then retreated to his hometown of Sussex to live off the grid in a treehouse that he built from recycled materials and to survive on what he could hunt, fish and forage.

Mr. Weston’s brand of bushcraft (chronicled in his blog-turned-book, “The Treehouse Diaries: How to Live Wild in the Woods”) struck a chord with people looking to connect with nature. So, in 2011, he created a cooking school, Hunter Gather Cook, and began running full-day courses on butchery, foraging and fire-making from a new, middle-of-nowhere treehouse.

By the time my husband and I signed on for a course last summer (a private one, since our schedule did not align with the group offering), Mr. Weston’s headquarters had relocated to a 19th-century threshing barn in an equally remote spot. The morning kicked off with us trudging up a gravelly path shouting “Hello?” as we searched for signs of life beyond the scampering weasels.

We crossed the threshold into environs that mixed elements of Soho House hygge (exposed brick walls peppered with vintage signs, a potbelly stove and snuggly blankets) with supper club edge (leather apron-clad helpers; a dining table tricked out with wax-clumped candelabra and plucked-from-the-earth artichokes) and a pinch of Grimms’ Fairy Tales (displays of knives, axes and taxidermy). The Metallica-rich playlist augmented the atmosphere.

British wood pigeons were the first order of business.

Standing at a prep table set with the essentials — cutting boards, knives, buckets — a member of Mr. Weston’s crew, who introduced himself as Chops, told us where and when the birds, which were far more attractive than the specimens in Chicago, my hometown, were shot and how the meat would be cooked (deep-fried legs and pan-roasted breast) since preparation informs butchery style. “Bone structure will be your guide,” he said, explaining that we would mostly use our hands to break down the bird.

We lifted the gray-blue plumage to get a sense of the anatomy: wings, breasts, breastbone, spine, legs and tail. This all felt fine. Still, I located an exit path in case my guts rebelled when the feathers began to fly.

The plucking was easy. You yank upward (against the grain) about as hard as you would on a loose thread dangling from a T-shirt. Next, we made a tiny incision in the chest and “released the skin” with our fingers until the breasts were exposed. Still, no nausea. I found the exercise fascinating. Once we snapped off the legs, excised the head and removed the wings, the remaining meat resembled something you’d see at the butcher shop.

The removal of the entrails was a bit more gnarly. But once it was done, we plunked the clean birds onto fresh cutting boards to inspect our handiwork and ensure that there was no damage, such as broken bones or trauma from the gunshots that had killed them. The meat was then handed over to the chefs.

Curiosity had trumped squeamishness, and I felt flushed with exhilaration. On to the rabbits. De-limbing a bunny is not for the faint of heart. I dismissed thoughts of Beatrix Potter as I removed the feet, tail and head before skinning the animal by making an incision at the belly and loosening the hide with my hands and tugging it off. The area from the shoulders to the hind legs is the saddle and contains the most tender pieces of meat, so from there we trimmed out these fillets and meat from the back haunches that would become part of our meal.

With the butchery complete, we swapped knives for wicker trugs and headed out to forage for yarrow, nettles, wood sorrel and meadowsweet, some of which would also be infused into our meal. Southern England is a mushroom paradise, but, sadly, we were too early to score the region’s celebrated truffles and chanterelles.

About three hours had passed, and a pick-me-up was in order.

Back in the garden behind the threshing barn, snacks were brought out along with a “wild” cocktail: foraged nettle gin gimlets that we sipped through a borage stem straw.

“This is where the magic happens,” Mr. Weston said, pointing to a hay-strewn fire pit that was flanked by a jumbo wood-fired oven and a homemade clay oven.

We chatted about methods of live-fire cooking (some courses involve roasting entire animals on a tree spit and “dirty cooking,” in which the protein is placed directly on coals) and about how to achieve maximum flavor. Then, sparks began to fly. Quite literally.

Fire-starting is a four-step process. You need a so-called firesteel to ignite a spark; you need to catch that spark with a material that, with oxygen (your breath), can become an ember; you need a tinder bundle; and you need the fuel, or logs, that will allow the kindling to morph into a proper fire. Patience, of course, is critical.

Initially, I was surprised that a course titled “Hunter Gather Cook” did not actually involve participants’ cooking.

But as soon as I sat down to charred sourdough begging to be dunked into gooey, baked, truffle-dusted Camembert (Mr. Weston’s dogs are truffle hounds), I got it. It had been an intense few hours, and leaving the kitchen duties to Mr. Weston’s team put a luxurious twist on the fruits of our labor.

This was no rustic smorgasbord; it was a serious tasting menu that told a story about how the seasonal, local products of this specific place became the elegant plate of food before me.

(Group courses are one day and cost 100 British pounds, or about $120, per person. In addition to the classic course, there are chef collaborator days and special seasonal courses that range from £85 to £180.)

Chicago Meat Collective’s hands-on hog butchery course involves breaking down animals that are culled from a local farm supporting humane and sustainable farming practices, and then heading home with 10 pounds of cookable cuts and charcuterie ($250 for a three-hour course).

At Chop Shop Butchery in Asheville, N.C., you can butcher a whole hog or lamb, a front quarter of beef and even fish while enjoying local beers and ciders (classes range from $80 to about $150).

Skill-building, multiday courses at Farmstead Meatsmith near Tulsa, Okla., include pork preservation, sausage-making, harvesting innards, confit-making and butchery. The “Family Pig” course will leave you with working knowledge of how to harvest two pigs ($1,390 for the three-day course).

The Meat Hook in Brooklyn, a whole animal butcher that works exclusively with family-run farms in New York State, offers a range of butchery and sausage-making courses (classes are about $100).

Follow New York Times Travel on Instagram, Twitter and Facebook. And sign up for our weekly Travel Dispatch newsletter to receive expert tips on traveling smarter and inspiration for your next vacation. Dreaming up a future getaway or just armchair traveling? Check out our 52 Places for a Changed World for 2022.

Should you buy a used police car? A guide to police auctions

Rod Jackson: Learning to die from Covid on a road to nowhere