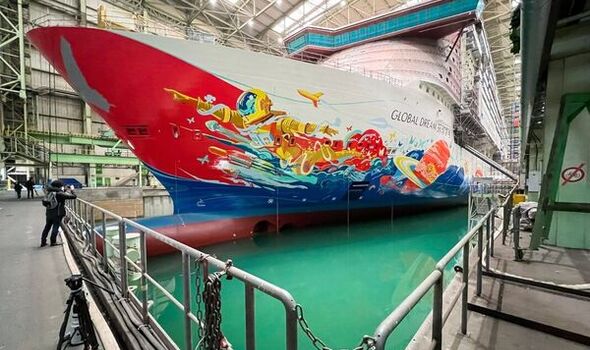 Global Dream II, the world’s biggest cruise ship, has been purchased by Disney after 10 months on the market. The incredible ship was abandoned in January 2022.

The mammoth ship is built to carry a whopping 9,000 passengers over 20 decks of luxury facilities.

The ship was designed with an outdoor waterpark and a cinema but has never left the dock after the company that built it went bust.

German-Hong Kong company, MV Werften, was abandoned after the company filed for bankruptcy in January 2022.

Disney confirmed it had bought the doomed vessel for a “favourable price” but did not reveal how much.

Josh D’Amaro, chairman of Disney Parks, Experiences and Products, said: “Disney cruise ships provide the unique opportunity to bring Disney magic to fans no matter where they are, and the addition of this ship will make a Disney Cruise Line vacation accessible to more families than ever before.”

The company said it had plans to “reimagine” the giant vessel before it joins Disney Cruise Line in 2025.

A huge project, the Global Dream II reportedly cost over £1.5billion to build and would have been the world’s biggest cruise ship by passenger numbers.

The ship had been intended to be scrapped for parts after the company went bankrupt with some set to be used for military vessels.

One of the issues with Global Dream II is that it was built for an Asian market and may need its cabin, deck and propulsion systems changed to operate in Europe or North America.

Disney Cruise Line is one of the world’s top cruise companies and is especially popular with families.

Royal Caribbean is set to launch the world’s biggest cruise ship, Icon of the Seas, in January 2024.

The huge ship will overtake another Royal Caribbean vessel, Wonder of the Seas, which was launched earlier this year.

Disney’s move may be a surprise to some cruise experts who believe that mega cruise ships could be going out of fashion.

Recently several top destinations have crackdowned on the size of cruise ships allowed in port and introduced limits on the number of passengers allowed to disembark.

Venice has banned cruise ships from its lagoon while a top port in Maine, USA is set to bring in tight limits on the number of passengers allowed each day.

Rules such as these often force the biggest ships to dock outside the main port and then use buses or trains to bring passengers in.

She said: “I think cruise ships are going to get smaller and the ships will probably divide into mass market and more sustainable options.

“Smaller ships, maybe 1,500 people maximum, they’ll be able to get into a lot more destinations.”

However she added that the larger ships will still be able to dock in larger freight style ports and may find ways to get around the issue.

'This virus may never go away,' WHO says

Manager of National Fleet Operations for Mazda Passes Away