Drinking wine in a flood and locals battling blizzards: Venice from a whole new angle, captured in images by a local photographer that get beneath the city’s postcard-perfect skin

It’s Venice – as you’ve never seen it before.

When most people think of Venice, they picture romantic, dreamy scenes of gondoliers punting along the Grand Canal and sunshine spilling onto the polished pavestones of Saint Mark’s Square. They don’t usually imagine people battling blizzards and men in wellingtons and waders drinking wine in flood waters.

However, these scenes all feature in Venezia – Through a Venetian’s Eye, an eye-opening new photobook about the city compiled by Venetian photographer and local Federico Povoleri and published by Teneues. The 224-page book aims to give readers a ‘whole new perspective into the soul of the city’.

Teneues says: ‘Federico Povoleri sees his hometown in a way no else does; with his scenic photography and vivid storytelling, he has captured the feel of the unique lagoon city that has threatened to drown in the day-to-day press of tourist hordes for decades now.

‘His black-and-white portraits of the city’s people, architecture, and daily life show everything you thought you knew from a whole new angle: enchanting, gripping, and intimate. Povoleri has created a wistful love letter to his hometown while warning us of the creeping destruction that threatens this incomparable beauty. Povoleri helps us see the magic beneath the endlessly photographed surface, a magic that reveals itself only to those who respect and understand the former sea-based republic.’

Scroll down for a peek at some of Povoleri’s candid images, unlikely to feature on a postcard anytime soon… 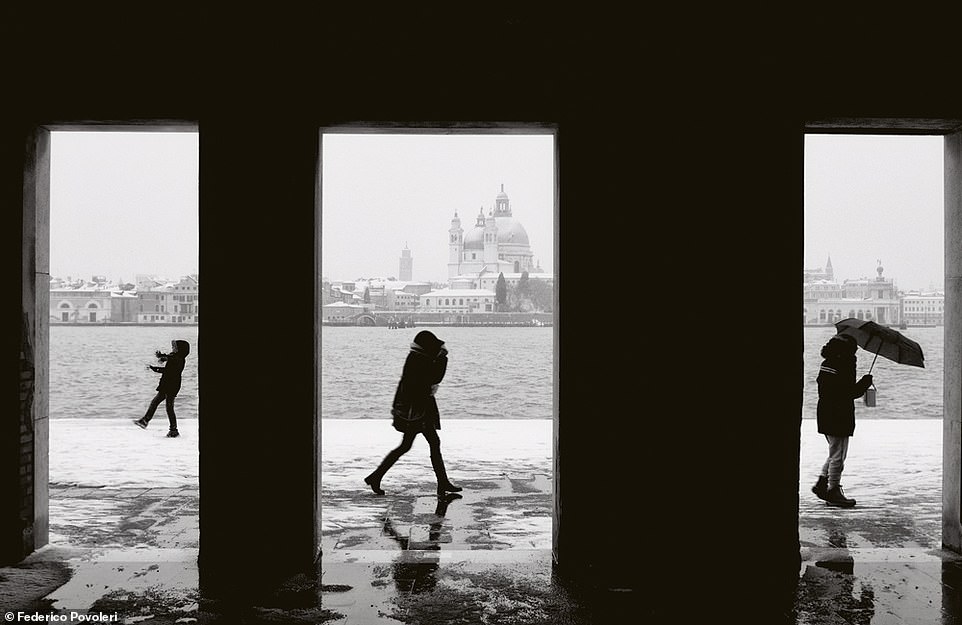 Entitled Snowy Venice, this shot was taken from an island in the Venetian lagoon called Giudecca, where Federico Povoleri lives. The 17th-century Baroque-style Basilica of Santa Maria della Salute features in the background of the image 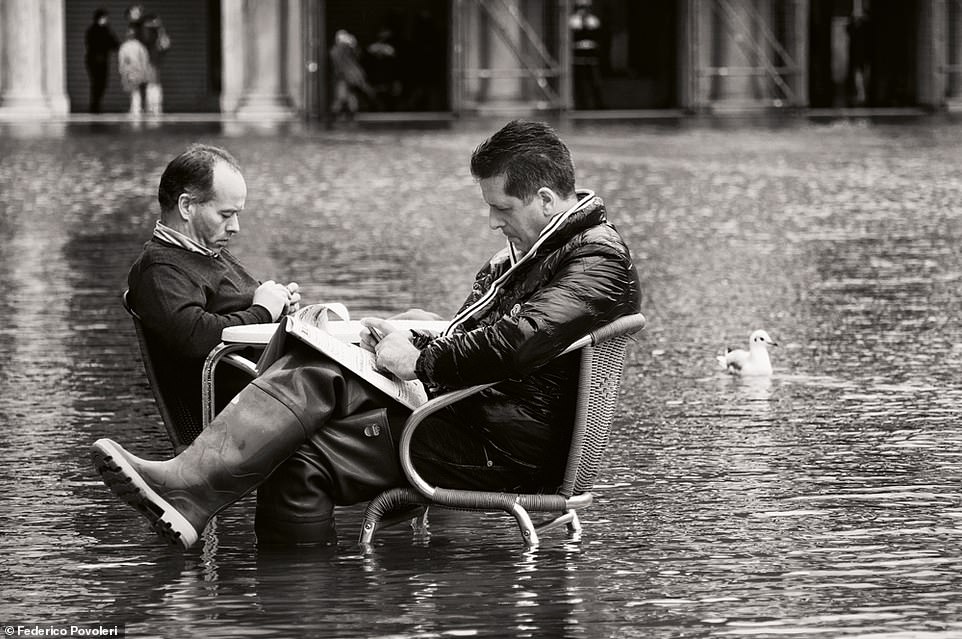 In the book, Povoleri explains how Venice suffers from regular flooding and how it has become ‘part of life in the city’. In this image two locals read newspapers at a cafe table while knee-deep in flood waters. Povoleri continues: ‘Observing the inhabitants of this city one realises that by no means do they like the constant inundation of their ground. However, they make an effort to accept the coexistence with a kind of brotherly tolerance’ 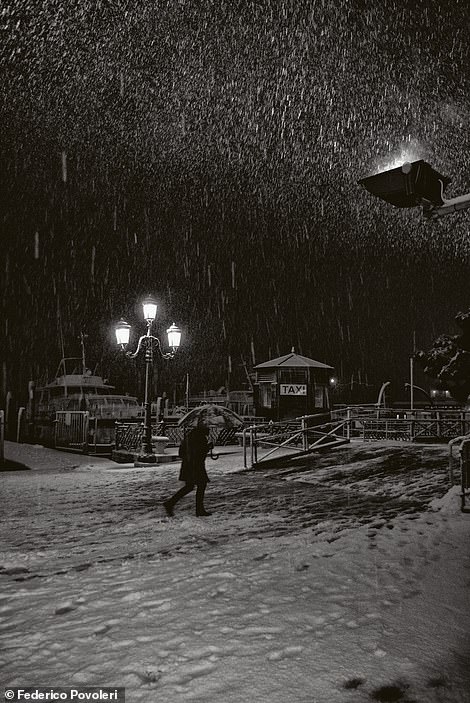 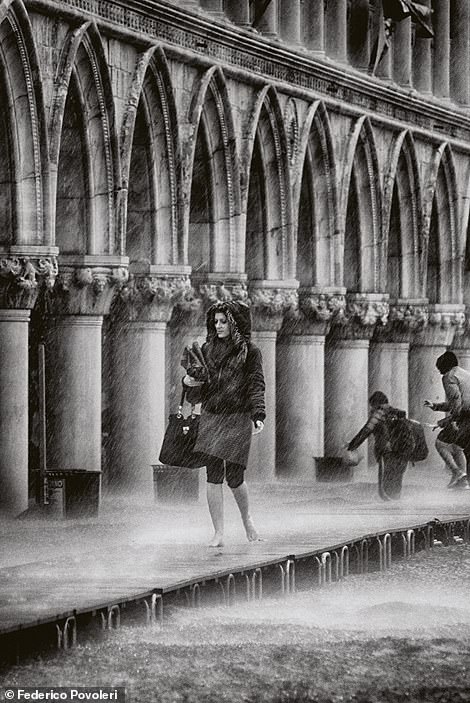 LEFT: In this photograph, Povoleri has captured what he calls an ‘atmospheric winter evening without a trace of tourists’. RIGHT: Describing this image Povoleri writes: ‘Water from above and from below. Wet everyday life in Venice’ 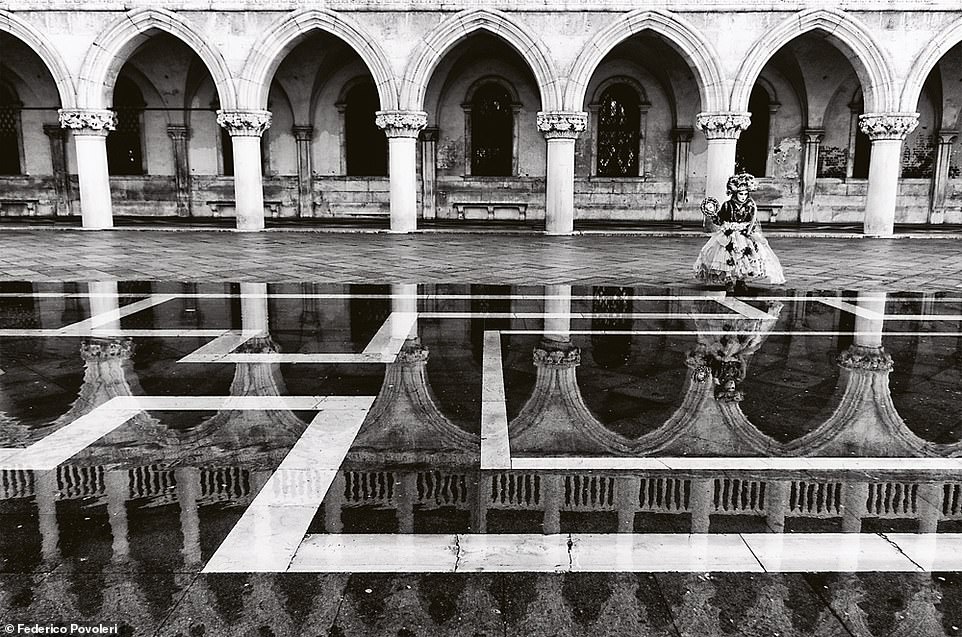 Every year, before the start of Lent, Venice hosts a carnival and locals get dressed up in elaborate costumes and masks for the occasion. This image features a person in traditional carnival costume. The book’s summation of the spellbinding image? ‘Fascinating water reflections of timeless effect’ 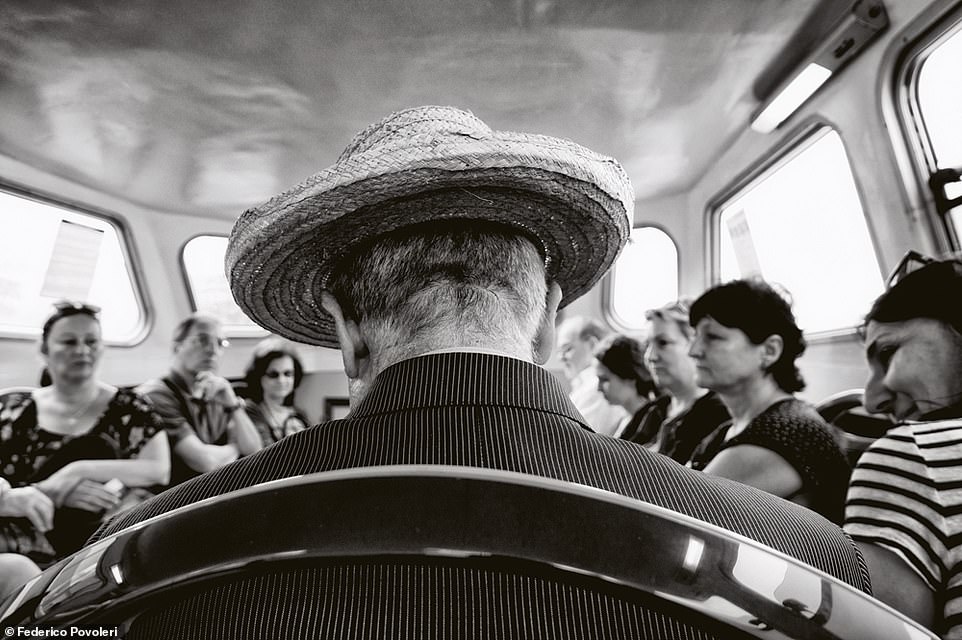 This candid shot was taken in a vaporetto, a public water bus with 19 routes that crisscross the lagoons of the city 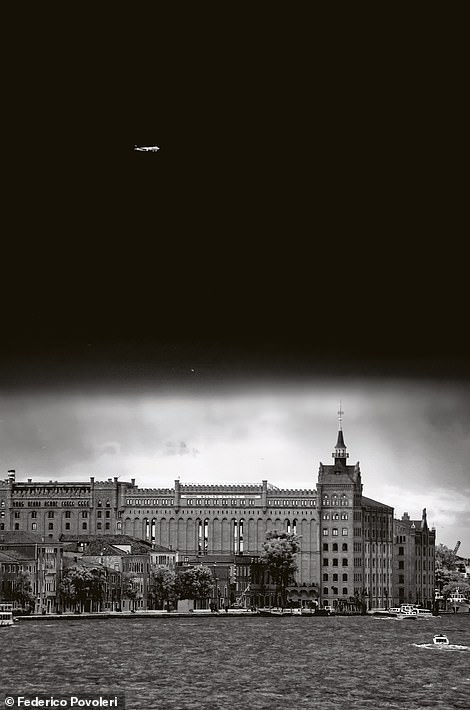 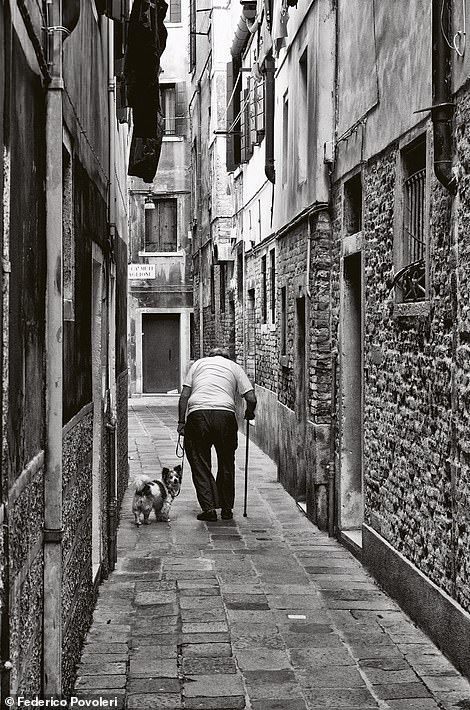 LEFT:  This image shows the Molino Stucky, a former flour mill that was ravaged by a fire in 2003. More than 20 pages of the book are dedicated to this fire. Alongside the pictures, Povoleri writes about his memories of the blaze. With vivid detail, the photographer recalls the moment he first heard about the fire, the bravery of the helicopter pilot who tried to extinguish the flames from the air, and how the east wing of the building ‘finally gave up with an angry scream’. He writes: ‘Even today the thundering crash is still ringing in my ear.’ Povoleri completes the chapter by explaining that the fire was eventually put out and the east wing was reconstructed and turned into a five-star Hilton hotel. RIGHT: This image of a man walking his dog through the streets of Venice features in a chapter of the book called The Last. In it, Povoleri explains how there are fewer and fewer locals left in Venice. He writes: ‘This is the city of the Last; the last speaking its language, the last to remember the past, the last craftsmen who know their business, the last who are able to listen and the last citizens’ 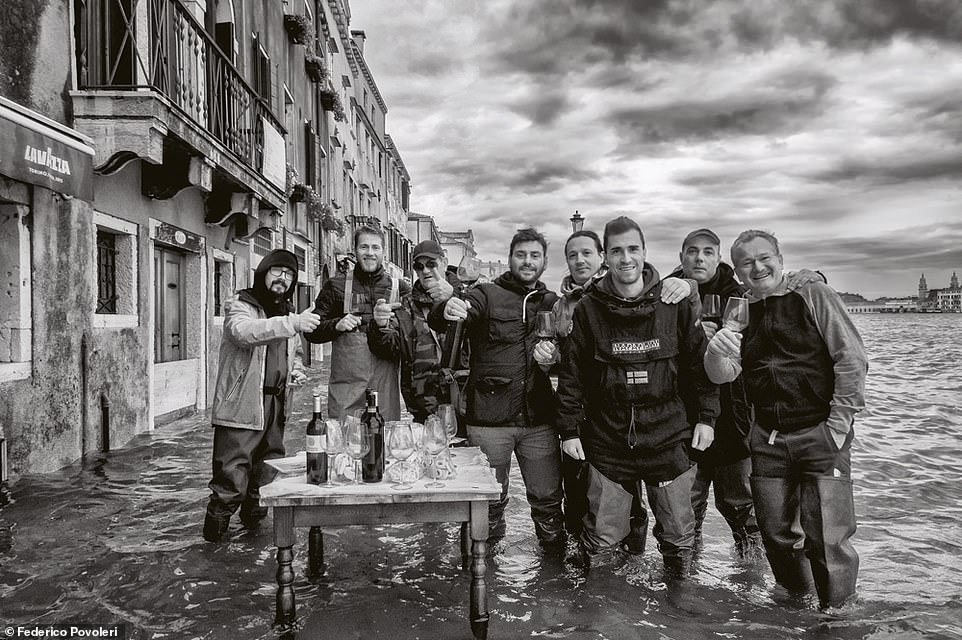 This shot was taken in the aftermath of a typhoon that struck on November 12, 2019, causing some of the worst flooding in Venice’s history. In a chapter called ‘The Great Flood’, Povoleri writes about his memories of the typhoon. He says: ‘It was a night nobody would forget. It was only 15 minutes before midnight when a sudden wind arose, full of unheard violence. During the following 15 minutes a typhoon, or perhaps a cyclone, or only God knows what, invaded the city demolishing thick boundary walls of brick that define the river banks, raising, dragging and swamping craft of whatever tonnage. The fury of a sea driven by air pressure smashes windows, doors and gates of buildings, palaces and hotels, it pours into houses and upturns dinghies, motorboats and gondolas in the lanes. It’s a disaster that the Venetians have never seen in all their history’ 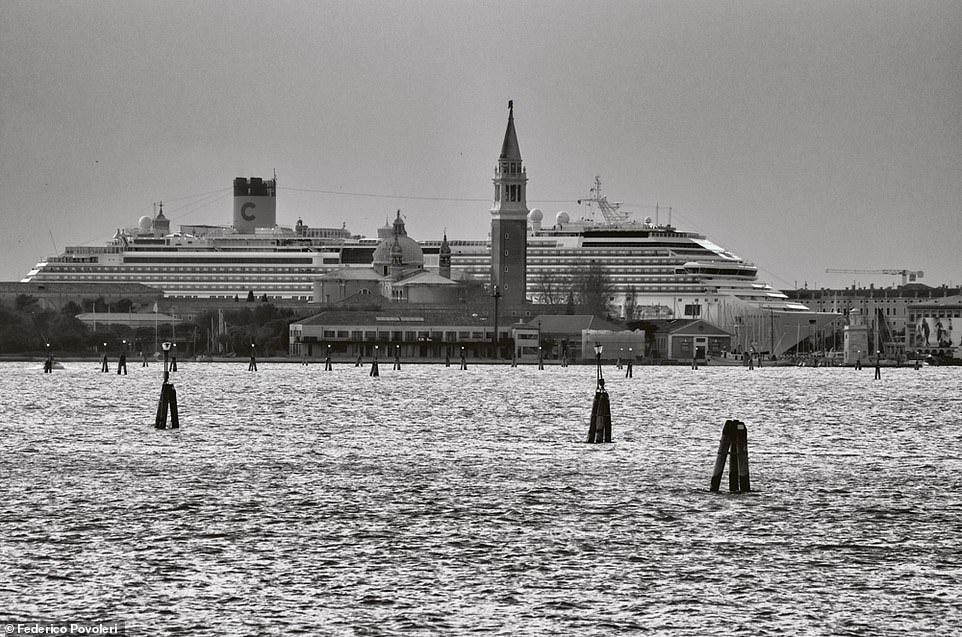 This shot captures a huge cruise ship in the water near Saint Mark’s Square. In the book Povoleri writes: ‘The passage of the big cruise ships as far as San Marco is a good deal for the dockers. For the city, however, it is a catastrophe… Gigantic cruise ships push themselves in front of the facades of antique palaces. Sometimes they emerge from the fog, at other times they spoil with their massive presence the wonderful light of the dawn or the sunset. Some maintain the opinion that they strengthened the progressive development and vitality of the city; for others, however, they only personify the greed for big profits of the few who hold influential posts’ 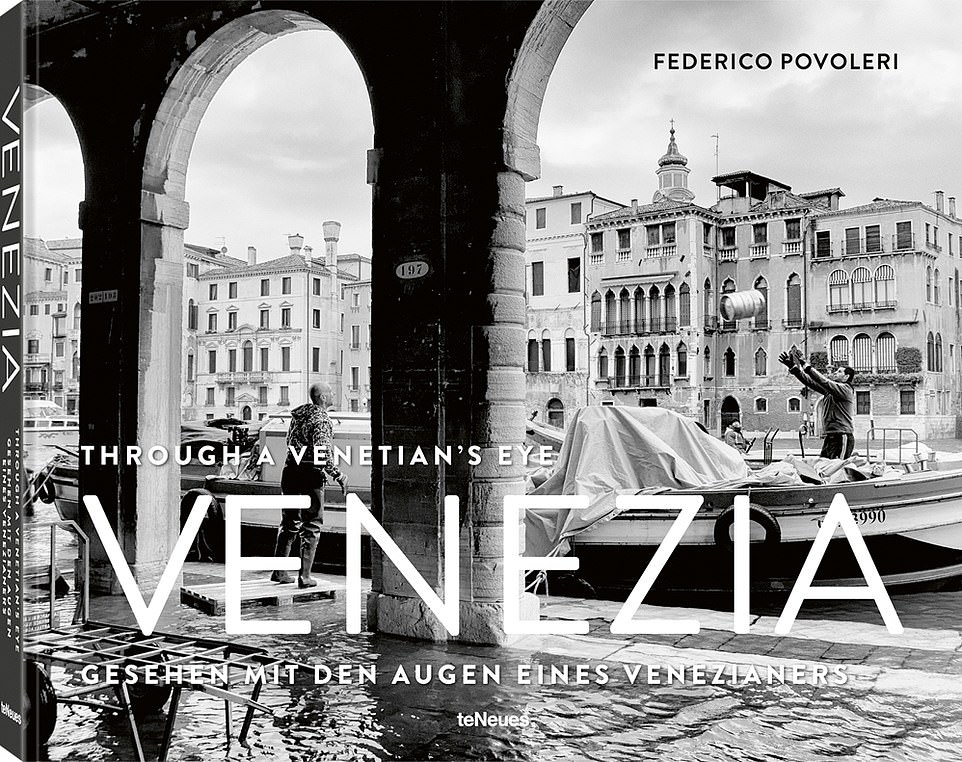 Venezia – Through A Venetian’s Eye is published by teNeues (www.teneues.com/www.accartbooks.com/uk/book/venezia-2/) and is priced at £45