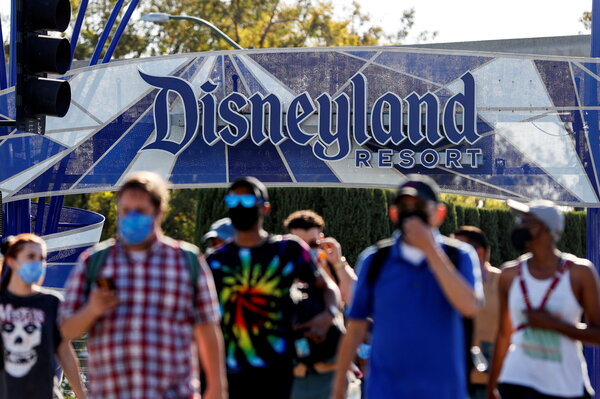 Disneyland welcomed out-of-state visitors to Southern California on Tuesday, marking the first time the theme park has been fully open since it closed in the midst of the pandemic more than a year ago.

The reopening came a day after Disneyland’s operators announced that fully vaccinated customers would no longer have to wear masks indoors or outside while at the park, in Anaheim.

Gov. Gavin Newsom said in an interview on Monday that Disneyland’s reopening adds to the optimism that recovery for the rest of the state is well on its way.

“Disneyland is of such iconic status that it’s a confidence boost, perhaps more than anything else,” he said. “It has a very substantial regional economic impact, which is important.”

Travel and tourism are key to California’s recovery. The state has invested $95 million into expanding marketing campaigns created by “Visit California,” the state’s tourism office, and it will continue to support travel workers, many of whom lost jobs during the pandemic.

Greg Antonelle, the chief executive of Mickey Travels, a travel agency that helps people plan Disney trips, visited the park and reported that rides were full, most people appeared unmasked and social distancing markers were gone.

“If you were asleep for the last 15 months and came here today, you wouldn’t know a pandemic happened,” said Mr. Antonelle, who traveled with his wife from Florida for the reopening.

Governor Newsom said, “In the aggregate, it’s going to take a few years for the industry to get back to 2019 numbers, but you’re seeing revenge tourism already take shape in California,” he said, referring to the notion that people are taking trips as “revenge” for a year spent stuck at home.

Andrea Conley, a physics teacher who lives in Brea, Calif., said that she has been to Disneyland several times since it reopened at the end of April, and waited to go later in the day on Tuesday to avoid long lines. Though the park wasn’t as packed as she anticipated, it felt pretty close to normal.

“Disneyland feels pretty great today,” Ms. Conley said from inside the park. “About 30 to 40 percent of people are wearing masks, they are filling rides full and there isn’t distancing in the lines, so wait times are less.”