The road ends, and the old Soviet car I’m in — a Lada Niva — begins to shake on the unpaved lane. In the darkness, Erdni, the driver, somehow manages to maneuver between large gullies and mounds of sand that seem impossible to discern.

After a couple hours of driving east from the Russian city of Elista, I find myself in the heart of the Kalmyk steppe — at the farming spot, or camp, where Erdni lives with his wife, his children and his father. 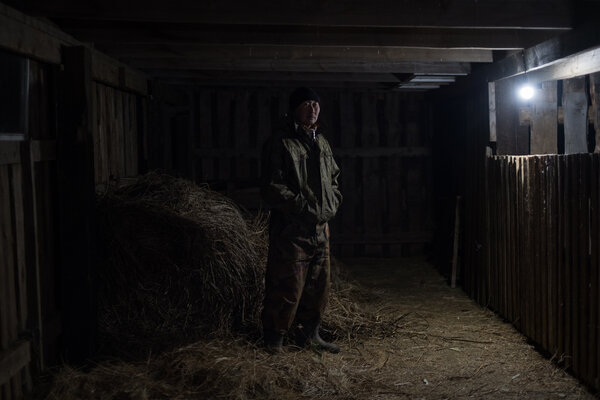 It’s the end of 2020, and the world is still gripped by the ongoing pandemic. Everywhere, it seems, people are struggling to maintain social distance. But there are communities in some parts of the world — here, for example, in the Russian republic of Kalmykia — where distance is an inescapable reality.

Kalmykia is a sparsely populated republic; only about 300,000 people live here, in a territory of some 30,000 square miles. You can drive for hours on end without meeting a single person.

I’ve come here, to the Kalmyk steppe, where the descendants of some of the last nomads of Europe live, in order to witness the customs and day-to-day lives of its people.

After we arrive, I toss my backpack into the corner of the guest yurt where I’m staying. Erdni’s house is several hundred feet away. The nearest camp, several miles. The nearest large settlement, more than a hundred miles.

The nighttime silence is broken only by the sounds of the wind and by a fox scratching at the walls.

Erdni wakes up around 5 a.m. and starts his motorcycle. I go with him to the sheep enclosure to watch as he drives them out to graze.

The sun rises and floods the desolate and lifeless steppe with a pinkish light. I gaze out at the landscape and imagine the many tribes and groups who once occupied these lands. Here, some 1,400 years ago, the Khazars, a seminomadic Turkic people, formed one of the most influential trading empires in the medieval world, profoundly influencing the histories of Europe and Asia.

Erdni’s son, Ciren, who is 11, helps with the sheep. His father shouts at him to be careful on the horse, warning him not to ride too fast.

In the last several decades, the landscape in Kalmykia has undergone severe desertification, threatening the livelihoods of the farmers who populate its steppe. Pastures were grazed beyond their sustainable limits. Droughts and unrelenting winds destroyed the once-productive land. Climate change is exacerbating an already dire situation.

In many places, an encroaching sea of sand is overtaking farmers’ camps, swallowing their animals’ food supplies.

Ciren asks his father to let him go in search of a cow’s skull, which he recently saw in the steppe. The farmer assents.

“After the past year,” Erdni tells me after Ciren has left, “I no longer wish for my son to continue my traditions here, or to live on this spot in the steppe.” Conditions have become too difficult. People are beginning to leave, he says, to live and work in other regions. Even Erdni has considered moving north in search of work.

“Our people have already been deported to Siberia once,” Erdni says, referring to a forced resettlement by the Soviet government in 1943. “Now nature itself is forcing us to leave.”

Erdni and I travel together across the steppe, navigating through the largely featureless terrain. He shows me the spots of other residents — some just being built, others having been here for generations.

We spend much of our time together discussing religion. Kalmykia, which is largely Buddhist, is the only region in Europe where Buddhism is practiced by a plurality of the population.

At some point a figure appears on the horizon. He’s wearing a sports jacket over the traditional robes of a Buddhist monk. I stop to talk to him. His name is Badma, and he smiles broadly to greet me.

Badma has recently returned from India, he says, where he had been studying spiritual practices. When the pandemic began, he was forced to leave.

“I will definitely return and continue my studies, but only when this is all over,” he says. He refers to the pandemic as a kind of karmic test — a result of our treatment of the earth and its resources.

Erdni nods in agreement. The earth, he says, is also alive. It also breathes.

Erdni explains that Zul, the equivalent of New Year’s Day, is the date on which Kalmyks traditionally add a year to their age — a kind of culture-wide birthday.