People are being urged not to drink bleach “even if it has been recommended by the president” as health officials and manufacturers have rushed to warn the public that drinking or injecting household cleaners could lead to organ failure. They spoke out as the US coronavirus death toll hit 50,000 on Friday and then 53,243 yesterday, with the number of confirmed cases now at 945,249.

Yet Georgia, Alaska and Oklahoma have now begun the process of gradually ending their lockdowns and a heatwave saw thousands take to the beaches in California while restrictions were also eased on Daytona Beach in Florida.

New York accounts for three-fifths of all US fatalities and recorded 437 new deaths yesterday, a slight increase on Friday’s figures, as the city still urged people to stay at home. But the number hospitalised was the lowest in 21 days, falling to around 1,100 as Governor Andrew Cuomo warned: “We have been through hell and it’s not over yet.

“What New Yorkers are doing is actually saving lives. It’s no exaggeration.

“I know the past weeks haven’t been easy but the sacrifices New Yorkers are making are not in vain.”

The city’s poison centre confirmed it had managed 30 possible poisonings within 18 hours of Mr Trump’s media conference on Thursday, double the number of a year ago, while Maryland’s facility fielded more than 100 questions. 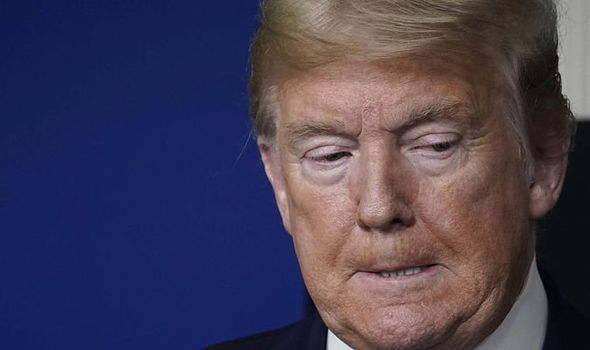 The American Medical Association warned people: “Do not ingest or inject disinfectant products – it will cause bodily harm.

“Treatments for Covid-19 must be guided by science and evidence. Rest assured, when researchers find a treatment for or vaccine against Covid-19, it will not be in the cleaning supplies aisle.”

Even before the president’s remarks, calls to poison centres about accidental exposure to chemicals and disinfectants in the first three months of this year were up 20 per cent on last year as people stockpiled products and increased their cleaning routines. Children aged under five made up the majority of the victims, the Centers for Disease Control and Prevention found.

Mark Geistfeld, a NewYork University law professor, said warning labels should be enough to discourage people from misusing these products. He added: “An adequate warning does not have to say, ‘Do not ingest, even if recommended by the president’.”

Mr Trump later claimed that he was being sarcastic, but on Friday he cut short his daily task force briefing without taking any questions from the media. 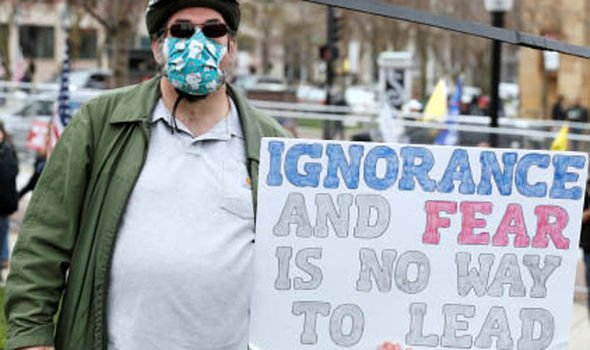 Globally, Covid-19 has now killed more than 200,000 and infected 2.89 million people, and while some countries begin to ease their clampdowns, others are maintaining tough restrictions in a desperate bid to get to grips with the pandemic.

In Saudi Arabia, the holy city of Mecca has been largely deserted, with millions of Muslims forced to celebrate Ramadan in isolation as the virus left 136 dead and more than 16,299 infected.

The central courtyard of the Great Mosque is usually teeming with worshippers from around the world but on Friday, the first full day of Ramadan, there were just three dozen men praying.

In Australia and New Zealand, thousands commemorated Anzac Day with their own private “stand at dawn” ceremonies yesterday. Usually, dawn services or quiet marches honour the two nations’ war dead, but with lockdowns largely still in place people turned out on their driveways or balconies to mark the national day of remembrance.

New Zealand prime minister Jacinda Ardern stood on her driveway along with her partner and father, and later wrote on Instagram: “A different, but still a really special Anzac Day. Lest we forget.” In Australia, people lit candles and prime minister Scott Morrison was one of just a handful of people allowed to attend a ceremony at the country’s national war memorial in Canberra. 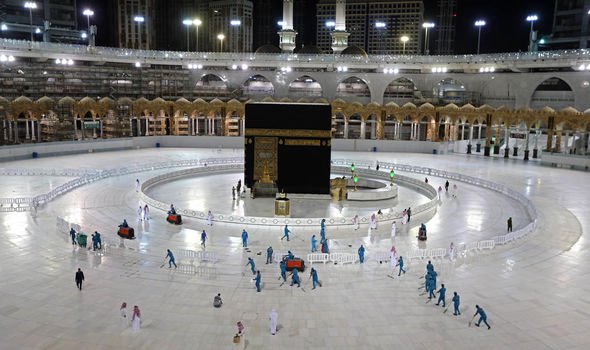 In Turkey, Commonwealth War Graves Commission supervisor Burak Gundogan laid wreaths on behalf of those who would have attended the cancelled service at the Anzac Cove beach memorial in Gallipoli.

Some countries, having seen rates plateau or decline, are now beginning to ease their lockdowns. In Spain, children under 14 will from today be allowed to play outside for the first time in six weeks.

Under adult supervision, wearing masks and maintaining social distancing, they can venture out for an hour between 9am and 9pm, staying within a kilometre of their home. Playgrounds will remain shut.

Spain’s emergency health chief Fernando Simon urged people to “avoid excessive euphoria” over the easing of confinement measures, which do not apply to older children.

Yesterday, there were 378 deaths, slightly up on Friday’s 367 which was the lowest in the past month but well down on the high of 950 seen on April 2. Italy’s daily coronavirus death toll of 415 was the lowest since March 17, while the 2,357 new cases were also the lowest in five days. 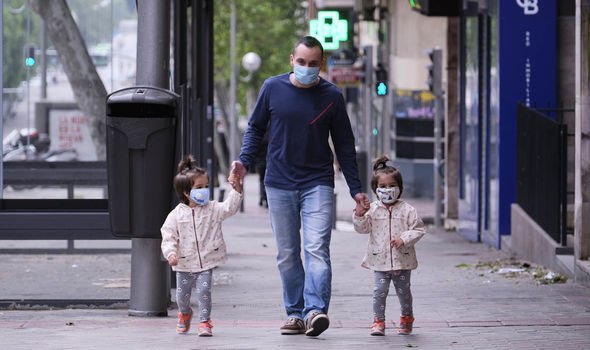 As Germany prepares to take over the sixmonth rotating presidency of the EU from July, Chancellor Angela Merkel in her weekly video podcast said: “It will be clearly dominated by the issue of combating the pandemic and its consequences.”

Along with many countries in Africa, Brazil is now rapidly becoming one of the world’s pandemic hot spots as hospitals, morgues and cemeteries are overwhelmed by cases.

Medical officials in Rio de Janeiro and at least four other major cities have warned their hospital systems are on the verge of collapse, or are already too overwhelmed to take any more patients.

The country has recorded 3,704 deaths and more than 54,000 cases, but experts fear the true figures among the 211 million population are higher than reported because of insufficient, delayed testing.

Thousands of British troops helping to tackle the crisis are being issued insect repellent containing Citriodiol. The Mosi-Guard repellent, made in Leeds, contains eucalyptus oil known to work against other forms of coronavirus. However it will not prevent soldiers from breathing in the virus.