BBC Weather meteorologist Carol Kirkwood warned Tuesday is to be a “day of mixed fortunes” for the UK due to a persistent weather split between the north and south caused by a slowly-moving band of rain. Ms Kirkwood said rain will be focused on Scotland and Northern Ireland later in the morning while England and Wales remain mostly dry until the evening. The BBC Weather forecaster said: “If you are in Scotland and Northern Ireland, you’re going to get up to a bright start a chilly start, with some sunshine and showers but you’ll have rain later.

“A fair mixture of weather today. We’ve got this weather front sinking south, it’s been doing so overnight, it’s produced a fair bit of cloud and some patchy rain as well.”

Ms Kirkwood continued: “After some bright spells and showers across Scotland and Northern Ireland, it won’t be too long before we see the rain piling in across both Northern Ireland and Scotland.

“And some of that getting into northern England as well. Temperatures 6C to roundabout 14C down towards London. 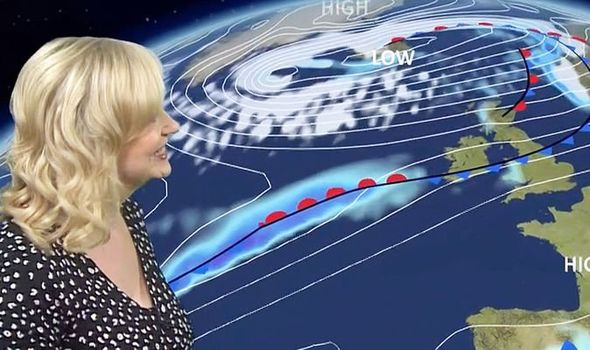 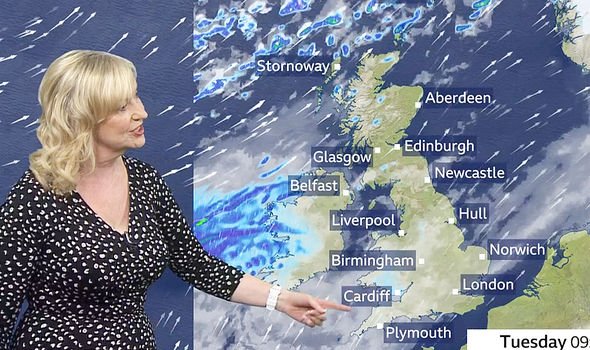 The BBC Weather forecaster said the weather front will be weakening as it heads southwards as she warned chillier conditions are expected to hit in the areas with persistent cloudier spells.

Ms Kirkwood added: “Through this evening and overnight, that front producing all this rain continues to sink southwards and, in doing so, it weakens becoming more patchy.

“One or two clear spells ahead of it so where we have cloudier spells it will be cooler and then behind it clear spells and also some showers, wintry in the higher grounds.” 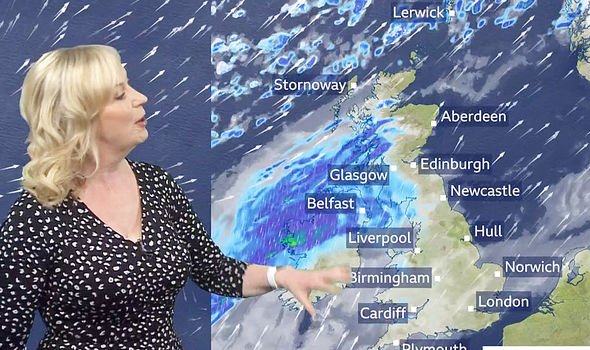 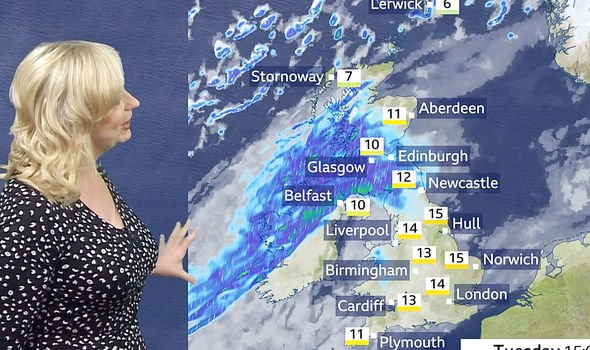 Temperatures are expected to remain mild over the next few days before sinking ahead of the weekend, with some meteorologist warning areas across the north and south could drop as low as -3C.

Met Office forecaster John Griffiths said: “Temperatures will be the mildest this year, with a chance of 17C on Tuesday or Wednesday in the South.

“But colder air from near Norway and then from the Baltic Sea spills across the whole country by Friday, until Sunday.

“-3C could be seen in the South and North, with widespread frost and some wintry showers over the North and East.” 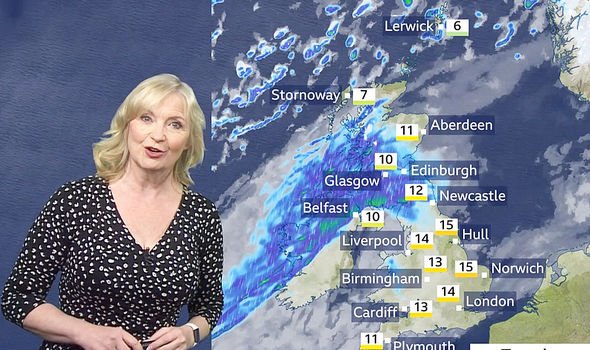 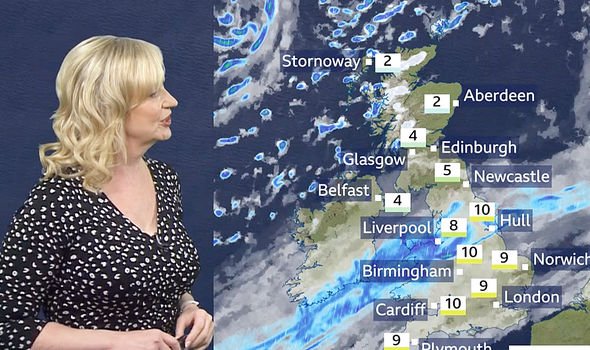 Mr Griffith added: “But there will be plenty of dry spells this week with much lighter rain than previous weeks. And ahead looks to remain drier, with plenty of sunshine for most.”

From Thursday, March 19 to Saturday, March 28, the Met Office’s long-range forecast says: “Rain and drizzle should continue to clear southwards through Thursday, becoming restricted to the southwest later in the day.

“Elsewhere should be brighter with spells of sunshine and the odd blustery shower lingering further north.

“The dry spells are likely to continue into Friday and Saturday, with some wintry showers over the north and east.

“Looking further ahead, there is a strong signal for conditions to remain drier and calmer. This will mean plenty of sunshine for most, with clear skies overnight leading to widespread frosts.

“Day temperatures are likely to be on the cold side too, but feeling pleasant enough in the spring sunshine. Weather fronts may approach the north and west occasionally, increasing cloud amounts, but these are likely to be weak with limited rainfall.”

Petrol and diesel prices likely to go up after major announcement