The BBC weather forecaster predicted windy weather across the North regions of the country. Ms Kirkwood also predicted a chilly start to Thrusday mroning as we enter the middle of the week and the weekend. There is also a possibility of snow on the mountains of Scotland. And temperatures will rang from 9-18 degrees across the country.

Ms Kirkwood said: “It’s going to turn much colder Naga as we go through the next few days.

“And by the end of this weekend, some wet and windy weather is coming in across the North of the country.

“That could produce some snow on the hills and mountains in the North of Scotland, so change is most definitely afoot.

“It’s a chilly start for some of us this morning, but for most, it’s a mild start.

JUST IN: Biden ‘amazed and overwhelmed’ by Britons’ affection for the Queen at state funeral 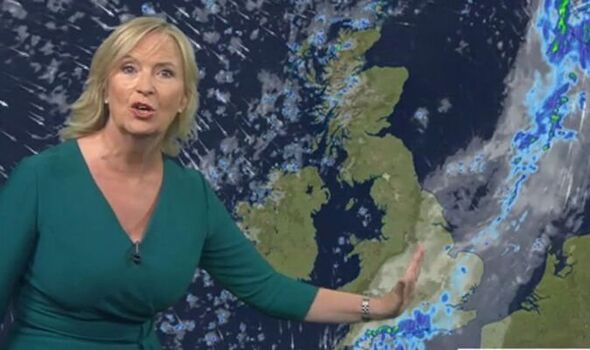 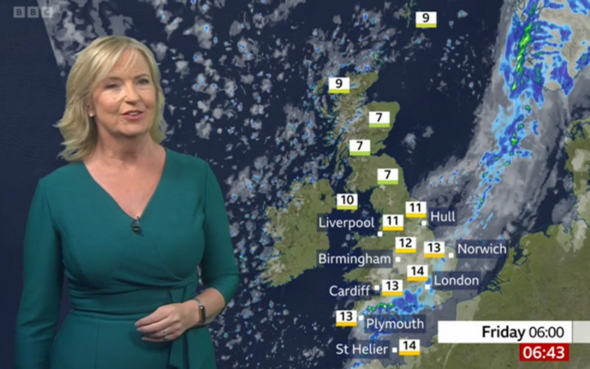 Ms Kirkwood added: “We’ve got some rain which is currently South Eastwards.

“It’s been moving across Scotland and Northern Ireland through the course of the night.

“And the track it’s taking is towards the South East, it’s already across Northern England.”

READMORE:Pub landlady vows to never take card because ‘you can’t get scammed’ with cash

Ms Kirkwood said: “I’m showing you this chart because the ambery colours are still in the South.

“So we’re still in the mild area here, but behind that cold front is a waving front you can see that we pull in the cooler yellows.

“So it’s been a cold front and it’s now going to be an iclusion eventually as the cold and the warm front merge.

“So to put that into perspective we start off on a dry and a bright note across Southern England. 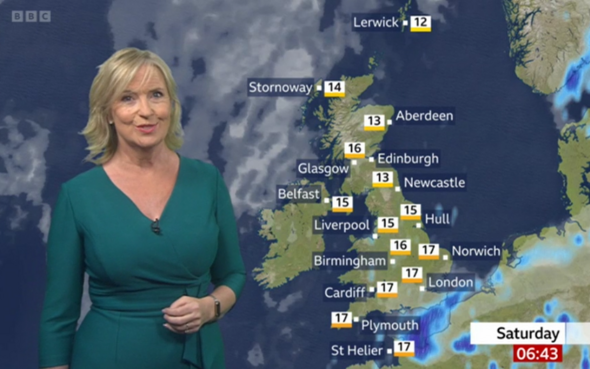 “So the cloud will continue to build just ahead of that, behind it for Scotland and Northern Ireland it’s going to dry up, the wind will drop out and we’re looking at just a few showers.

“But the mild air continuing in the South, we’re going to have highs up to 19C-20C possibily a little bit more, but behind the front the cool air starts to filter in.”

Printemps to Keep Three Citadium Branches It Planned to Shut

BBC Weather: Northern and Western Europe to be battered by heavy downpours over weekend