MINSK (Reuters) – A husband in jail, her children hurried abroad and a secret crossing from Belarus into Lithuania in the dead of night: Sviatlana Tsikhanouskaya’s journey from home life to opposition hero has been an improbable one. And it’s not over yet. 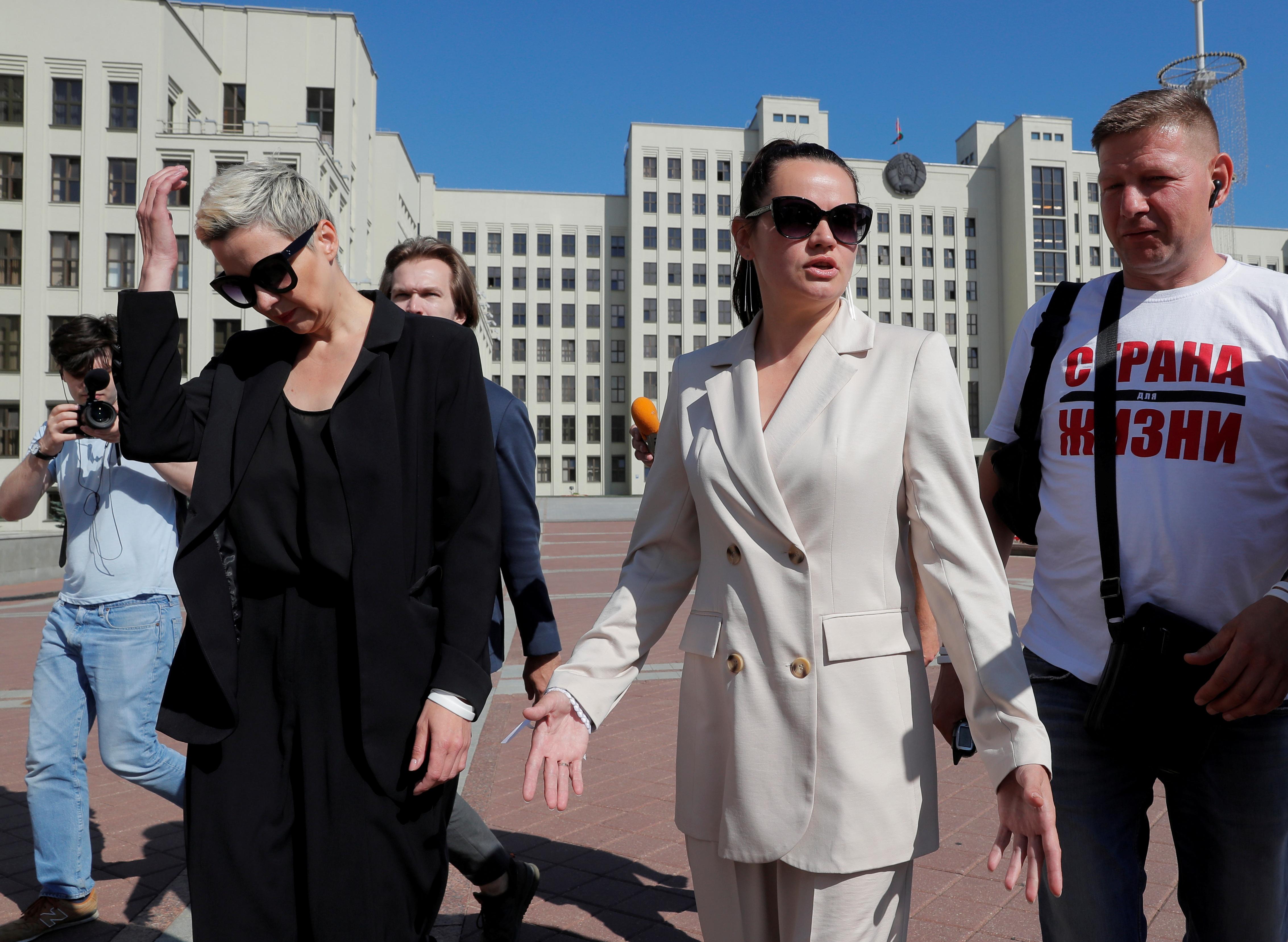 The 37-year-old former English teacher was never supposed to be the figurehead of popular resistance to President Alexander Lukashenko, the former Soviet collective farm boss who has ruled for over a quarter of a century.

But when her husband, a well known video blogger, was jailed in May and other candidates were barred from running in the Aug. 9 presidential election, Tsikhanouskaya emerged as challenger-in-chief to a man whose position suddenly looks precarious.

“Initially, I was not going to do this. It did not even occur to me,” Tsikhanouskaya told Reuters in a July 30 interview, referring to her decision to take her husband’s place as an opposition candidate on the ballot.

“It was an emotional decision when they refused to register Syarhei.”

At first she shied away from the public gaze.

But she carried on, encouraged by other opposition leaders and the thousands of signatures collected on her behalf that were needed for her to register as a candidate. Her campaign rallies drew tens of thousands of people as support snowballed.

Lukashenko’s claims of a landslide election victory were disputed by the opposition and sparked mass protests in the country of 9.5 million.

Now all eyes are on Tsikhanouskaya, in self-imposed exile in neighbouring Lithuania since Aug. 11, when she slipped over the border at 3.30 a.m.

There, reunited with her children, she has tried to orchestrate opposition to a leader who is used to getting his own way. Yet Lukashenko clings to power.

Tsikhanouskaya’s husband, who compared Lukashenko to a moustachioed cockroach from a children’s fairy tale, had tapped growing frustration against the president, in power since 1994.

He is in prison charged with assaulting a police officer, violating public order and preparing riots. Supporters say the accusations against him are fabricated.

Frustration turned to anger for many over Lukashenko’s handling of the coronavirus pandemic, which he dismissed as a “psychosis” and recommended drinking vodka, taking saunas and driving tractors as remedies.

Pro-government media ridiculed the aspirations of the stay-at-home mother to become president. Lukashenko said the burden of office would cause a woman to “collapse, poor thing”.

But the campaign gained momentum, helped by two other women – Veronika Tsepkalo, wife of former U.S. ambassador Valery who was barred from running, and Maria Kolesnikova, member of the team of Viktor Babariko, who was jailed at the start of the campaign.

“We could not imagine that it would be supported by the whole of Belarus society, this idea of three women organized against this regime. It has became a symbol of resistance for the whole world,” Valery Tsepkalo told Reuters from exile in Moscow on July 26.

The head of the Central Election Commission, Lidia Yermoshina, mockingly called them the “Three Graces”.

Yet when they embarked on a series of electoral rallies, the women quickly drew crowds of thousands of people across the country.

Throughout the campaign, the pressure on Tsikhanouskaya and her family did not let up.

According to his associates, Syarhei was sent to solitary confinement for 14 days in June and another 4 days in July as punishment for sitting on the windowsill of his cell, for not removing a cobweb on the ceiling and for not shaving.

Tsikhanouskaya said she could barely recognise her husband because he had lost so much weight when she saw him on a screen at a court hearing. The interior ministry declined comment on the conditions of her husband’s detention and his weight loss.

On June 16 she said she had been threatened with having her children taken away if she did not give up.

The General Prosecutor’s office has said it would investigate the suspected threats against Tsikhanouskaya’s children. They declined further comment.

When Lukashenko claimed to have won 80 percent of the Aug. 9 vote, Tsikhanouskaya refused to recognise the result and demanded a recount.

The next day she went to the Central Election Commission (CEC) to submit an official complaint. Then she vanished.

Reuters was not able to establish all of the details of what happened inside the building.

According to Olga Kovalkova, one of Tsikhanouskaya’s aides who accompanied her there, she was separated from her lawyer and taken to an office.

The head of the commission, Yermoshina, said she introduced Tsikhanouskaya to two security men who had a long discussion with her, according to comments to Russia’s Komsomolskaya Pravda. The election commission could not be reached for comment.

Tsikhanouskaya did not re-emerge, Kovalkova said, and it was only when she turned up in Lithuania that they knew she must have left the commission via another exit.

“When we arrived at the CEC building, there were no plans from her that she was planning to leave Belarus. We planned to fight for victory,” Kovalkova told Reuters.

Her husband also did not know, and found out from his lawyer Viktor Matskevich, the lawyer said.

Hours after she disappeared, looking shaken and downbeat, Tsikhanouskaya released a video from Lithuania.

“You know, I thought that this whole campaign had really toughened me up,” she said to the camera.

“But, probably, I’m still the weak woman I was in the first place. I have made a very difficult decision for myself,” she said, adding that political tumult in Belarus was not worth anyone losing their life for.

“Children are the main thing in life.”

Lukashenko said the government had helped Tsikhanouskaya leave “at her request”, without elaborating.

A separate video surfaced on Aug. 11, apparently filmed at the election commission building.

In it, she read from a piece of paper in stilted official language and reversed her earlier stance by asking supporters to accept the election results and stop protesting. The government and the election commission could not be reached for comment on the video.

Tsikhanouskaya’s political ambitions are not over, however.

She released a video this week urging foreign powers not to recognise the election results and helped set up an opposition council to push for a transition of power. 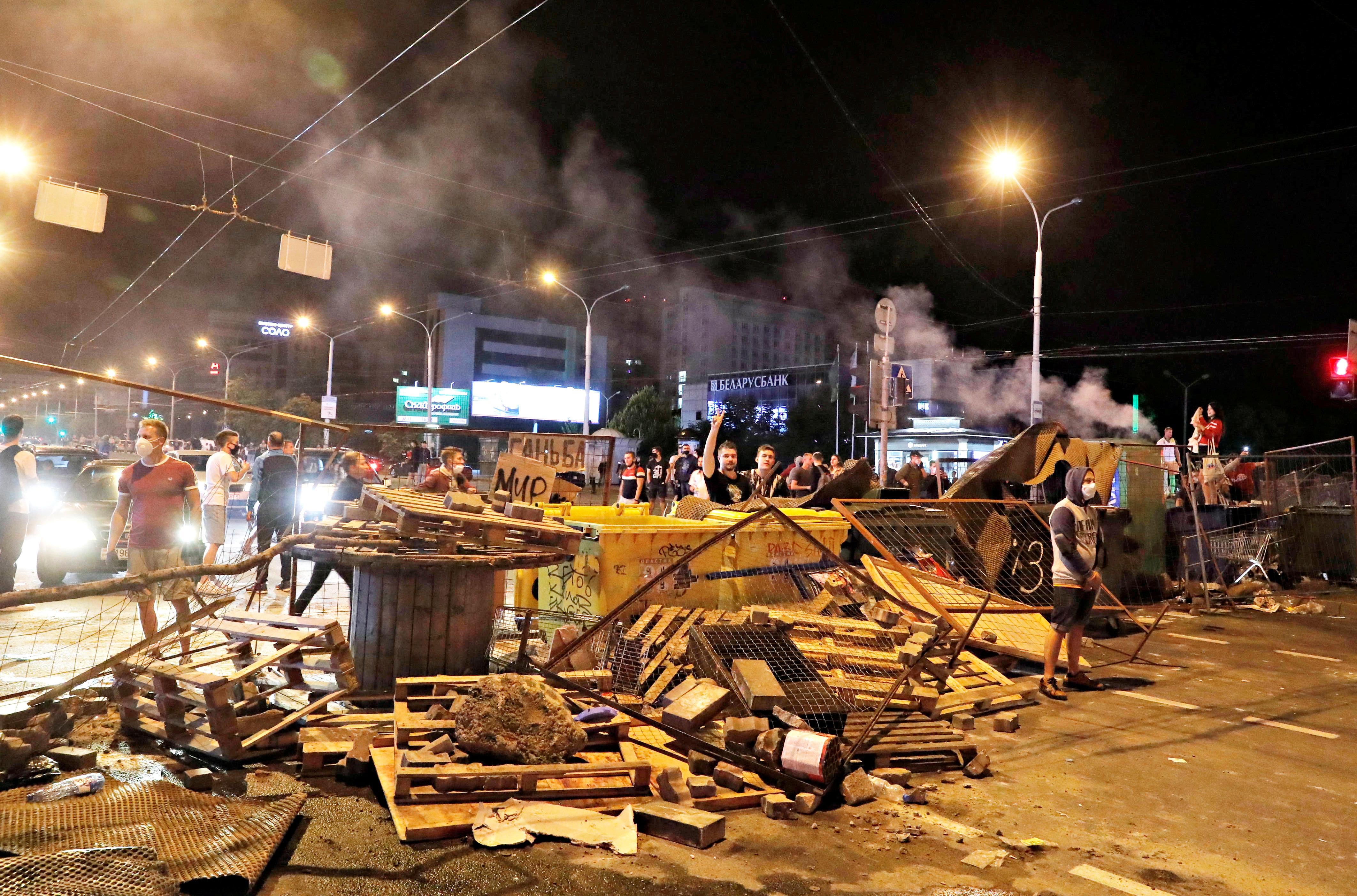 Belarus has launched a criminal case against the council, accusing it of an illegal attempt to seize power, and Lukashenko threatened to clear the streets of protesters who reject his re-election.

In her first press conference since leaving Belarus, she called for new elections that were free and fair, and told reporters she would return home when she felt it was safe.

Asked whether she had been threatened by the Belarus authorities, Tsikhanouskaya declined to comment. She travels around Vilnius in a black van with tinted windows, followed by three police vans carrying armed police in bullet proof gear.

Evil parents who ‘boiled’ girl, 2, to death left her to suffer for 5 days