As he turns 100, the last surviving prosecutor of the Nuremberg trials on why alleged war criminals should be heard. 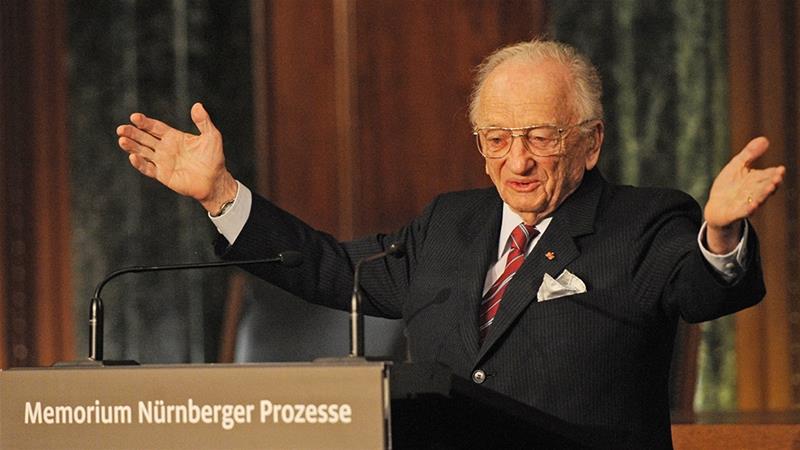 Benjamin Ferencz, the last surviving prosecutor of the Nuremberg trials, was born 100 years ago, on March 11, 1920, in Transylvania.

His Hungarian-Jewish family moved to New York when he was 10 months old.

After graduating from Harvard Law School, he joined an artillery battalion of the US army in 1943. As the second world war was ending, he served as a war crimes investigator and visited many Nazi concentration camps as they were liberated.

Upon his return to New York, he was recruited by Telford Taylor, a prosecutor of high Nazi officials, to return to Germany to work on the war crimes trials at Nuremberg.

Ferencz was appointed chief prosecutor in what was described as the biggest murder trial in history – the “Einsatzgruppen case”, referring to the paramilitary death squads of the SS, or Schutzstaffel, the organisation under Adolf Hitler and the Nazi Party.

Ferencz has since fought for war victims and continues to believe that alleged war criminals deserve fair trials.

Al Jazeera: You are 100 years old. How do you remain happy having witnessed so much tragedy, and what are your greatest fears?

Benjamin Ferencz: I have no choice! From the horrors I have seen as a liberator of the camps and member of the US army. I was honourably discharged and awarded five battle stars for having survived the landing on Normandy beach. But nothing compared with the concentration camps where people were murdered.

We now have the capacity from cyberspace to cut off the electrical grid on planet Earth. That means we can kill everybody now.

We need to change our way of thinking and stop glorifying war. Law is better than war. Isn’t that obvious to everybody?

Al Jazeera: How did you feel in that courtroom facing high-ranking Nazis at the Nuremberg trials?

Ferencz: I was fearless. I was absolutely at ease. I stood there facing the 22 accused who looked so arrogant. I knew I had the evidence to convict them. I rested my case in two days. I never let fear interfere with what I had to do.

Al Jazeera: How did you feel towards the end of the trial?

Ferencz: I listened soberly. I made my own list of what I thought the sentences would be and in fact the judges were more severe. I certainly did not feel at any point, ‘Hooray for me.’ It was very sober, very quiet in the courtroom. The judge said: ‘This tribunal sentences you to death by hanging …’ Again and again.

I felt like the accused had just been dropped into hell, one at a time. I had a tremendous headache. I didn’t feel proud or successful. I realised these were human beings that were going to be hanged.

Al Jazeera: At the time, were German citizens interested in the trials?

Ferencz: The German people were not much interested in the trials. They were more interested in where they were going to get their next loaf of bread from. There was no fraternisation with Germans.

I was, however, disappointed that in my entire time both in Nuremberg and elsewhere, I never came across a German who expressed remorse for the atrocities.

Al Jazeera: Is there sufficient awareness of the Nuremberg trials in the United States?

Ferencz: There can always be more awareness. There is not enough. Nuremberg took a great step forward. We tried to substitute the rule of law for killing.

Crimes are committed by individuals. We should give the individuals a chance to explain their behaviour in a fair trial and only if they are found guilty, according to clear laws, should they be punished.

Al Jazeera: Has the US learnt the lessons of Nuremberg?

Ferencz: Some people in the US have but some have not. Those who still hold the reins of power have shown no respect for the rule of law.

All administrations – both Republicans and Democrats – have refused to ratify the ICC Statute. They don’t want to subject US soldiers to the ICC but the soldiers do commit crimes. And war-making itself is the greatest crime of all.

Al Jazeera: In recent months you have been critical of the assassination of Iranian General Qassem Soleimani, which was ordered by US President Donald Trump …

Ferencz: In the case of Iran, the president of the US has admitted it. He said: ‘We took them out.’

I was furious at the expression. ‘Took them out?’

To disguise it as if he was taking him for a walk in the park. Who are you ‘taking out’ and why? Are we at war with Iran? Does the fact that we consider him a ‘bad guy’ allow us to kill him and anybody else?

We put Hermann Goering on trial. We should have put Soleimani on trial. The same goes for Osama bin Laden.

This interview has been edited for brevity and clarity.

Parliament: Do not leave vulnerable groups behind as economy transforms amid Covid-19, say MPs