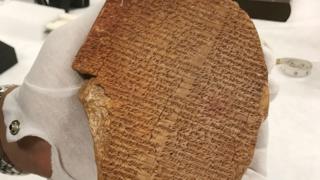 US prosecutors are seeking to confiscate a rare ancient tablet from a Christian museum co-founded by the president of retailer Hobby Lobby.

The 3,500-year-old artefact, from what is now Iraq, bears text from the Epic of Gilgamesh, one of the world’s oldest works of literature.

Prosecutors allege that an unnamed auction house deliberately withheld information about its origins.

Hobby Lobby said it was co-operating with government investigations.

The office of the US attorney for the Eastern District of New York says the tablet was illegally imported into the US.

Known as the Gilgamesh Dream Tablet, the artefact features sections of a Sumerian poem – parts of the epic mirror stories from the Old Testament, such as the Garden of Eden.

According to a civil suit filed on Monday, the tablet was originally purchased by an antiques dealer in 2003 in London.

In 2007, the dealer sold it to another buyer for $50,000 and allegedly included a fake document claiming it had been obtained at an auction in the US in 1981.

Three years later, when the museum’s curator asked for clarity about the tablet’s origins, the auction house allegedly withheld information about its origins, including the fake letter which it knew “would not withstand scrutiny”. 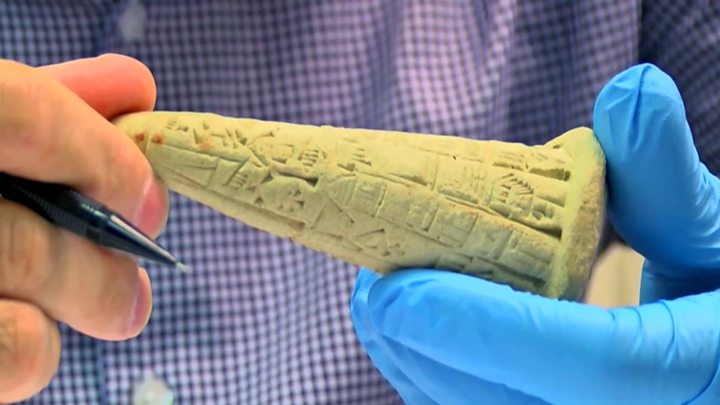 It is unclear if the suspected theft was flagged to authorities by the museum.

The tablet was seized from the museum in September last year; Monday’s legal move was a formal attempt to take possession.

Iraq’s ministry of antiquities told US broadcaster NPR that it was working to find out if the tablet was one of thousands of items stolen from its museum in 1991.

At least nine of the country’s 13 regional museums were looted that year when Saddam Hussein’s regime lost control of certain areas of the country, soon after his invasion of Kuwait.

The civil suit comes after Hobby Lobby was fined $3m and forced to hand over thousands of smuggled ancient artefacts from Iraq which it had bought for the Bible museum.

In March, the museum’s board chairman, Steve Green, also disclosed that it had discovered another 5,000 papyrus fragments and 6,500 clay objects in its collection with insufficient provenance. He said the artefacts would be returned to Egypt and Iraq.

Factbox: How to travel in Europe in the era of coronavirus