The office will be the first government effort to focus specifically on the public health dangers of global warming. 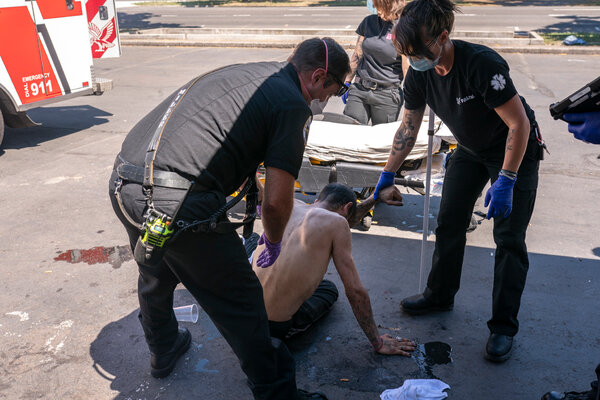 WASHINGTON — Amid deadly heat waves and new evidence showing that wildfire smoke may contribute to premature births, the Biden administration is creating a new federal office to address the health consequences of climate change and their disproportionate effects on poor communities.

The Office of Climate Change and Health Equity, which administration officials plan to formally announce on Monday, will be the first federal program aimed specifically at understanding how planet-warming greenhouse gas emissions from burning fossil fuels also affect human health. It will fall under the Department of Health and Human Services.

It’s an area that medical experts have urged the government to take more seriously, and public health leaders said the new office was long overdue.

“The health of the American people is falling through the cracks because there hasn’t been a targeted focus on climate risk,” said Aaron Bernstein, interim director of the Center for Climate, Health and the Global Environment at the Harvard T.H. Chan School of Public Health. “This is the opportunity to plug that hole.”

In 2009, scientists warned in the medical journal The Lancet that global warming would harm crop yields, cause tropical diseases to show up in new parts of the world and lead to water shortages. In 2020, the journal said those threats no longer belonged to the distant future.

“Climate change is fundamentally a health threat,” said Gina McCarthy, the White House national climate change adviser. She said part of the mission of the office would be to encourage doctors to talk to their patients about protecting themselves from things like heat waves, wildfire smoke and other air pollution.

In particular, experts said, more needs to be done to understand how extreme weather affects older people as well as communities of color, where families are more likely to live in areas hardest hit by disasters.

“There’s a saying that if white people catch a cold, Black people catch pneumonia,” said Beverly Malone, chief executive of the National League for Nursing. “Health equity has a lot to do with where you live, and we have understood the linkage.”

President Biden has requested $3 million to fund the climate office next year, a sum that still requires congressional approval. Those setting up the office have been brought in from other agencies drawing on existing funds. John Balbus, the senior adviser to the director of the National Institutes of Health on climate change, will serve as interim director.