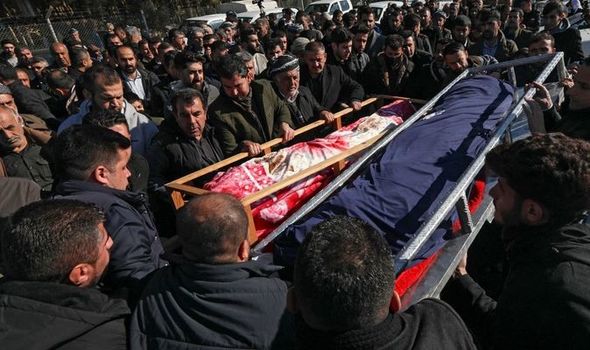 They were among the 27 who died near Calais after their flimsy dinghy deflated and capsized in November.

The plane carrying the bodies landed early yesterday at the airport of Erbil, the capital of Iraq’s autonomous Kurdish region.

Ambulances then took the coffins to the home towns of those who died.

Heartbroken fatherAhmed Mohammed rocked emotionally as he waited for his son Deniz’s body.

Recalling his desperate last moments as they spoke on the phone, the stricken father said: “He said ‘I am about to sink. Please forgive me. And I told him, ‘my son you are forgiven’. My family and I have lost our spirit.We don’t have a life.”

Shukriya Bakir, a mother who lost son Rezhyar, said: “The last time I heard his voice was when he got on board. He said ‘Don’t worry Mum, I will reach England shortly.’ Now he’s back to me in a coffin. Just two months ago, I lost another son.”

And the family of Baran Nuri Hamadamin, 24, who drowned trying to reach her fiancee in the UK, surrounded the ambulance crying as her body was carried away.

France’s interior minister Gerald Darmanin described the frail boat which deflated in the Channel as “like a pool you blow up in your garden”.

A large number of the migrants trying to cross the Channel this year have been from Iraq’s Kurdish region, selling homes and possessions to pay smugglers in a bid to reach the EU.

More than 28,000 people have crossed the Channel in small boats this year. At least 67 people were rescued early on Christmas Day.

COVID-19 passports: What are they, how would ‘certification’ work and would anyone be exempt?

Britain unlikely to lift coronavirus lockdown until end of May: government expert