BRASILIA/RIO DE JANEIRO (Reuters) – Brazil’s President Jair Bolsonaro has denied the country’s healthcare system will collapse next month, contradicting his own health minister as the number of deaths in the country jumped 39% and confirmed cases topped 1,500. 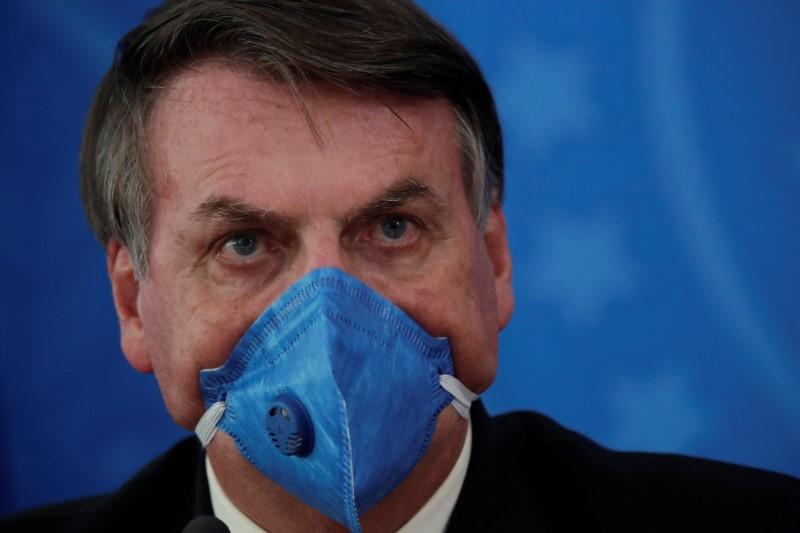 The latest health ministry figures on Sunday show that the death toll from coronavirus in Brazil rose to at least 25 from 18 the day before, a rise of 39%, and the number of confirmed cases now stands at 1,546, up from 1,128.

In an interview with CNN Brasil on Saturday night, Bolsonaro also expressed his frustration with several states’ measures to essentially shut down commerce and restrict people’s movement, saying they have gone too far and are damaging the economy.

“I think Mandetta was exaggerating,” Bolsonaro told CNN Brasil, referring to health minister Luiz Henrique Mandetta, who said on Friday that Brazil’s fragile healthcare system will collapse under the weight of coronavirus by the end of April.

Bolsonaro said “collapse” was the wrong choice of words.

“What we’re doing is lengthening the infection curve. I don’t believe in a collapse,” he said.

Bolsonaro tweeted on Sunday that the government is distributing around 10 million coronavirus tests, half of which have been dispatched this month.

Sao Paulo state, Brazil’s richest and most populous, on Saturday said a statewide quarantine order would take effect on Tuesday and last through April 7, shutting down all but non-essential businesses and services.

Retailer Via Varejo said its 1,000-plus stores of white goods chains Casa Bahia and Ponte Frio are closing indefinitely, meaning thousands of brick-and-mortar shops of Brazil’s most recognizable chains now have their shutters down.

A Datafolha poll in Sunday’s Folha de Sao Paulo newspaper showed that an overwhelming majority of Brazilians support many of these drastic measures to beat the spread of coronavirus, although opinion is much more divided on business shutting down.

Some 82% said they agree with the suspension of church services, a decision Bolsonaro, who was elected into office with massive support from evangelical Christians due to his conservative social agenda, has heavily criticized.

Evangelical churches were shut or deserted on Sunday in some of Brazil’s major cities, with many switching to broadcasting services online or via their radio and television channels.

The massive doors of the Temple of Solomon, a 10,000-seat place of worship belonging to the Universal Church in Sao Paulo, were closed during what is usually one of their busiest times.

Security guards patrolled outside telling visitors that services at the church were suspended for two weeks. Reuters visited five of Sao Paulo’s biggest evangelical churches – all were closed.

Ailton Pinheiro, a member of the administrative team at the Assembly of God church in Brasilia, said pastor Hadman Daniel is giving sermons two or three times a week via his Facebook page and that the church will remain closed as long as it is told.

“Everybody realizes the situation. Everyone has accepted it calmly,” he said in the church’s deserted car park.