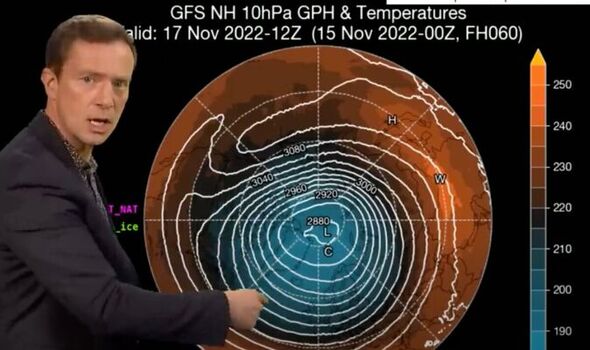 A relentless onslaught from cyclonic low-pressure systems threatens heavy downpours and wind into December. Heat energy in the ocean currents surrounding the UK will drive the assault, according to forecasters.

Jim Dale, meteorologist for British Weather services, said: “Low pressure is going to keep coming in through the rest of the month, which means more weather fronts bringing more rain, and from time to time, more wind.

“The wind is likely to be more localised, with the real issue coming from the rainfall and the danger of flooding it is going to bring through the rest of November.

“The relatively mild ocean waters around the UK are acting like an energy provider, and that is part of the reason we are seeing this rainfall.”

Foul weather will be bolstered by the jet stream which, following the ‘Polar front’, has shifted across Britain.

The jet flows high in the atmosphere along the separation line between cold Arctic air and milder air over Europe–the Polar front.

It will gather pace through the rest of the month steering low-pressure and volatile weather fronts towards Britain.

Mr Dale, author of Weather Or Not? said: “The jet stream has moved southwards closer to the UK, and this will steer low pressure towards us.

“It will also help these systems to gather intensity, and so there will be some heavy downpours at times.

“These will also be slow-moving, so there is a danger of flooding, and a rinse and repeat of what we have been seeing over the past couple of weeks.”

Circulation of the Polar vortex–a body of air in the stratosphere over the North Pole–will ramp up adding to the misery.

Met Office meteorologist Alex Deakin said: “We are stuck in this spell of windy interludes because of the stratospheric Polar Vortex which at the moment is particularly strong.

“The Polar vortex sets up every autumn above the North Pole, and this week there is a strong circulation.

“When it weakens, it can indicate a beast from the east, but that doesn’t look like happening at the moment, it is particularly strong, and this reinforces the jet stream keeping things generally wetter and windier.”

It will continue to drive unsettled conditions through the rest of the week and possibly into next month, he warned.

He said: “The projections don’t suggest any weakening of the polar vortex into the first week of December, it may even strengthen further through the last week of November.

“It means a continuation of the same, spells of wet and windy weather swinging in there will be briefer drier interludes in between and generally mild.

“But with that wind direction, we could at times tap into some slightly colder air, but generally the mild November looks like continuing.”

Western regions will bear the brunt of the chaos with the east of Britain turning drier for a time this weekend.

Netweather forecaster Terry Scholey said: “There will probably be an east-west split, with the east perhaps turning drier but somewhat colder, if though not entirely settled.

“It will remain windy and wet at times in the west with further gales, but milder here. “Top temperatures will be 7Cto 9C in the east and southeast, and 10C to 12C elsewhere.”