Britain tracked Chinese submarines from its flagship aircraft carrier and was ready to intercept Chinese jets in the South China Sea if required, officers have revealed.

Frigates and helicopters operating with HMS Queen Elizabeth were able to locate the underwater vessels, helping the UK’s biggest warship to steer clear.

Chinese warplanes were also in the air, but they kept a “professional” distance, while sending a signal of sorts by turning away just within missile-firing range – about 150 miles out. 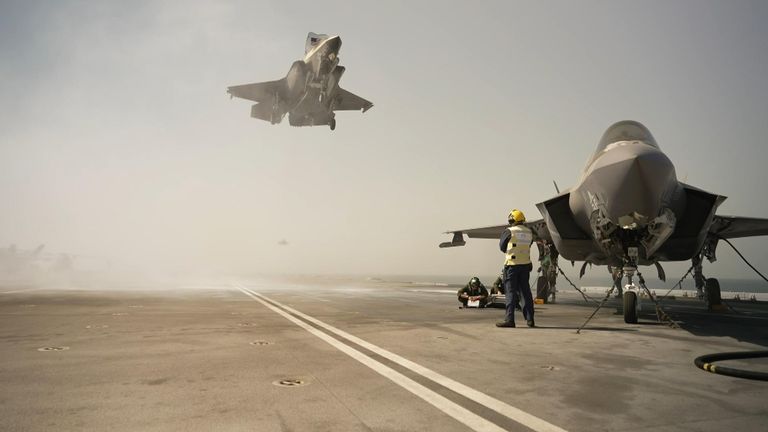 Commodore Steve Moorhouse, commanding officer of the UK Carrier Strike Group, said: “In that sort of cat and mouse type game, I am absolutely clear they are turning away at ranges where they are probably using us to facilitate their own training in the same way that we would do it towards them. So, it wasn’t causing us a concern.

“They were not engaging or locking us up or anything like that whatsoever. But the ranges at which they were flying at were indicative of what they would do for real.”

The new details about Britain’s maritime encounter with China, which happened between August and October, emerged as the defence secretary said it is “highly likely” the carrier will at some point be used to launch airstrikes against terrorist targets, including possibly in Afghanistan.

This would be “to take out people who pose an imminent threat to the United Kingdom or our allies”, Ben Wallace said during a visit to the ship, which is on a stopover in Oman.

“Whether that’s next week, next month, next decade – this carrier is in it for the long run.”

Sky News was this week given rare access to the Queen Elizabeth on its maiden deployment, dubbed Operation Fortis, from the UK to the Far East and back. 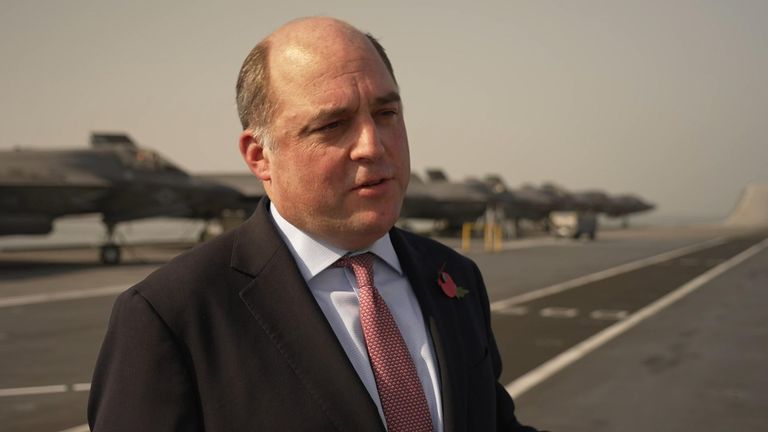 Escorted by a flotilla of Royal Navy, Dutch and American warships – and partnering up with some 40 other militaries on the way – the carrier has travelled more than 40,000 nautical miles and counting since May.

Now headed home, Cdre Moorhouse said the tour has had an impact.

“If you are a nation that may want to cause mischief, harm or disrupt – I think you’ve definitely sat up and watched what the Queen Elizabeth is all about,” he said. 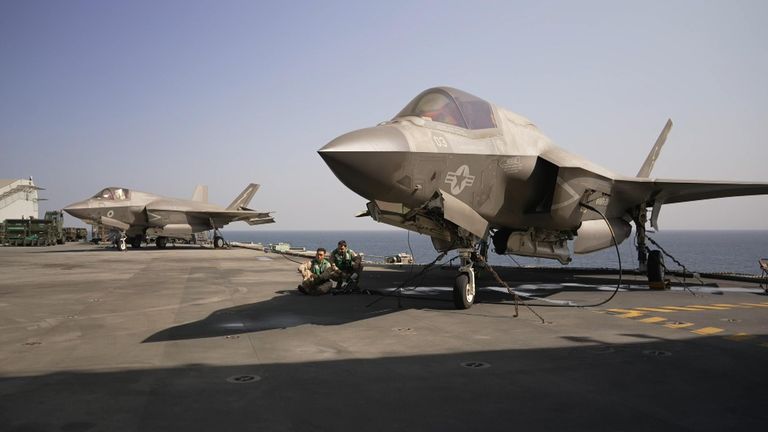 Perhaps the toughest test for its crew of some 1,600 sailors, marines and airmen was when Russian jets closed in as the carrier travelled through the Eastern Mediterranean in June.

UK and American F-35 warplanes, lined up on board, were scrambled to stop them from flying overhead – the first time in living memory that British pilots have launched at sea to intercept and escort Russian aircraft.

“It was great,” said Commander Mark Sparrow, officer commanding 617 Squadron, which operates the F-35 – the UK’s next generation stealth warplane.

“It’s exhilarating enough taking off the carrier in normal times, but when you’re doing it [in a] rush it adds that edge to it and then to go and meet an SU-35 or an SU-34 [Russian fighter jet] visually is always exciting.” 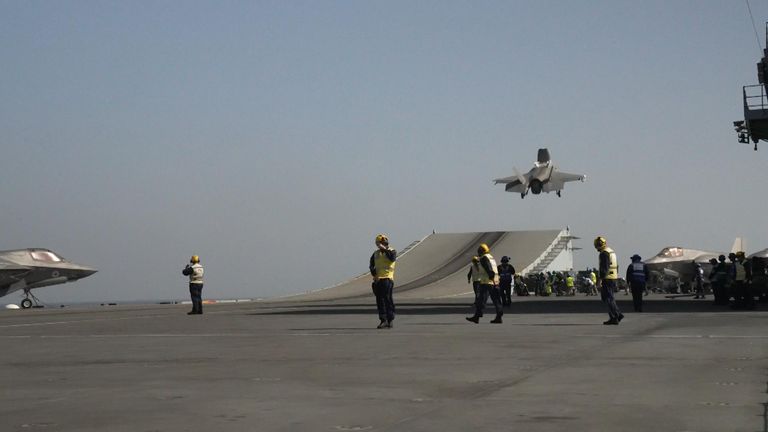 At times, pilots were strapped into their jets, weapons loaded, engines running, to be able to take off as soon as required over a period of Russian activity that lasted nearly three weeks.

Asked what message he thought the carrier strike group had sent to Moscow, Cdre Moorhouse said: “We simply are not going to be bullied around. It is a huge piece of water space and nations should be able to operate there freely.”

Officers in the operations room said they were prepared for a similar challenge, this time from China, as the carrier moved into the South China Sea – the most anticipated leg of the journey. 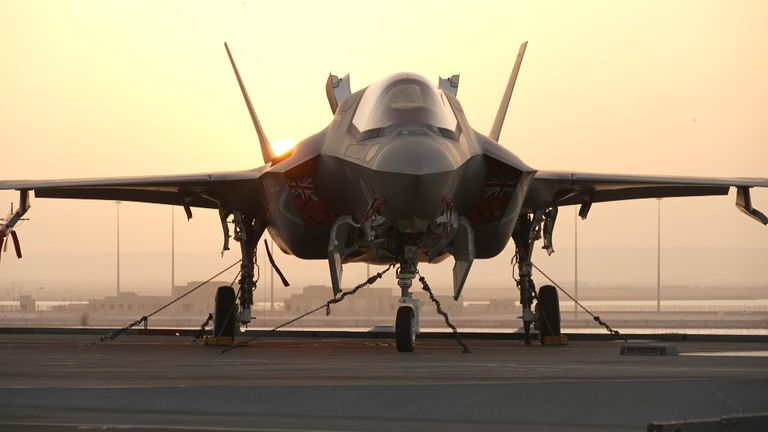 “We were expecting very much the same response from the Chinese,” said Lieutenant Commander Richard “Tom” Hanks, senior warfare officer.

But this proved to be unnecessary.

“We saw [Chinese] aircraft come out at range and holding off at range – so the requirement to have the [flight] deck at the right alert cycle was met, but the requirement to launch them [F-35 jets to intercept] was never really needed,” Lt Cdr Hanks said. 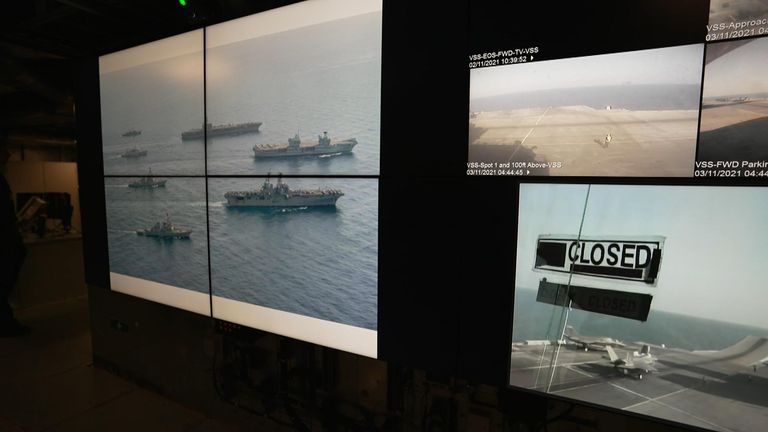 Asked how he felt about the lack of high-speed scrambles, he said: “We were all a bit let down actually, we were a bit frustrated. We were so hyped up from the Eastern Med operation and so pleased with the performance of everybody that we wanted to replicate that in another area of the world, literally the other side of the world.”

The wider UK strike group of warships and helicopters did have a chance to hone their submarine-hunting skills though.

“On a couple of occasions we were confident we knew where their submarines were,” Cdre Moorhouse said. “So we literally almost hold the submarine where it is using our frigates and helicopters and then we can move the carrier around it, literally side-stepping it, so we can continue on our way safely.” 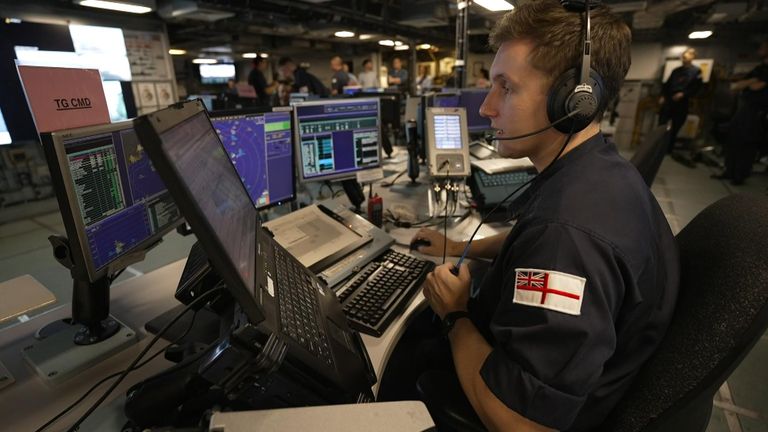 Speaking about the experience of operating in the South China Sea, the commanding officer said he had directed his team to show Beijing “how good we really are”.

This included flying F-35 jets 24 hours a day, while the accompanying frigates and destroyers conducted other tasks. “I believe we would have left a lasting impression about where UK carrier strike has come in a very short time,” he said.

Netball: Youngsters go through hoops for their dreams