Parliament votes to allow military to help curb the movement of people, with a mandate to use force if necessary. 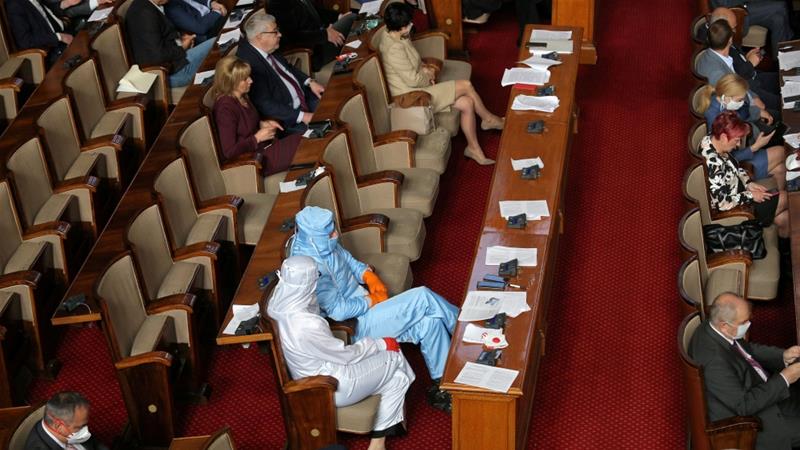 Bulgaria’s parliament has voted after a heated debate to allow the military to help curb the movement of people amid the coronavirus outbreak, with a mandate to use force if necessary.

The armed forces will be mobilised to assist civilian authorities, with the authorisation to stop vehicles and people until the police arrive. The decision was not taken lightly on Friday.

“A virus cannot be beaten with a machinegun,” said Krum Zarkov from the opposition Socialist Party, one of the 55 deputies who voted against the deployment of the army.

Zarkov called the measure unjustified, but it passed with 89 votes for, 55 against and two abstentions.

As of Friday, Bulgaria had 129 confirmed cases of the coronavirus, and three deaths. It has introduced a state of emergency, closed schools, restaurants and bars and banned all foreign and domestic holiday trips until April 13.

The parliament vote comes at a time when authorities are struggling to enforce the strict curbs on movement.

Special measures have already been imposed on Roma neighbourhoods in several towns in southern Bulgaria. Thousands of Bulgarian Roma are said to have returned recently from Western Europe where, some fear, they may have contracted the coronavirus.

In Nova Zagora, Kazanluk and Sliven, where more than 50,000 Roma live, municipal authorities have introduced checkpoints to prevent people from leaving Roma neighbourhoods in large groups.

“They may feel discriminated against, but there is nothing like that, and the measure is not for that purpose,” Nova Zagora Mayor Nikolai Grozev told media.

With an estimated population of 12 million, approximately six million of whom live in the European Union, Roma people are the biggest ethnic minority in Europe and rights groups say they are often the victims of prejudice and social exclusion.

Also on Friday, Bulgaria banned access to city parks and restricted non-essential travel between cities and towns as of Saturday.

Access to food shops and pharmacies for two hours in the morning will be banned for people below 60 to allow the elderly and most vulnerable to buy medicines, Health Minister Kiril Ananiev said.