The campaign event near Las Vegas ignored a state directive, and the Nevada governor criticized President Trump as “taking reckless and selfish actions.”

Here’s what you need to know: 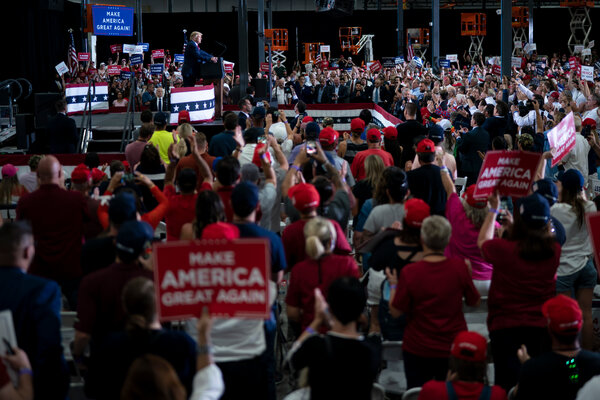 Trump supporters gather indoors as journalists ask why he played down the virus.

President Trump on Sunday held a campaign rally indoors for the first time since late June, when he appeared at an event in Tulsa, Okla., that was later blamed for a surge in coronavirus cases in the area.

The rally on Sunday night, held at a manufacturing plant outside Las Vegas in defiance of a state directive limiting indoor gatherings to 50 people, was attended by thousands of supporters, the vast majority of whom did not wear masks.

Steve Sisolak, the Democratic governor of Nevada, said on Twitter that Mr. Trump was “taking reckless and selfish actions” that endangered the lives of people in the state. “This is an insult to every Nevadan who has followed the directives, made sacrifices and put their neighbors before themselves,” he said. “It’s also a direct threat to all of the recent progress we’ve made, and could potentially set us back.”

The Trump campaign had vetted several outdoor venues, but they were all blocked by the governor, according to an administration official familiar with the planning. Tim Murtaugh, a campaign spokesman, defended the indoor setting, saying in a statement, “If you can join tens of thousands of people protesting in the streets, gamble in a casino, or burn down small businesses in riots, you can gather peacefully under the First Amendment to hear from the president of the United States.”

Earlier in the day, White House and Republican officials struggled to respond to sharp questioning by Sunday morning news hosts about why Mr. Trump knowingly played down the coronavirus in the crucial early months of the pandemic, as revealed by the journalist Bob Woodward in his new book, “Rage.”

The White House trade adviser, Peter Navarro, claimed on the CNN program “State of the Union” that “nobody knew” how dangerous the virus was at the time the president spoke to Mr. Woodward in February and March. In fact, Mr. Navarro himself wrote a memo in late January warning Trump administration officials that the virus could cost the United States trillions of dollars and put millions of Americans at risk of illness or death.

Ronna McDaniel, the chairwoman of the Republican National Committee, provided a different defense of the president, saying that Mr. Trump had understood the serious threat the virus posed by early February but was “calm and steady and methodical” because he did not want to cause a panic.

Dr. Scott Gottlieb, the former commissioner of the Food and Drug Administration under Mr. Trump, suggested on the CBS program “Face the Nation” that the president might have chosen to underplay the seriousness of the virus in part because he was getting bad information early on from the Centers for Disease Control and Prevention and other health agencies.

In an interview with “60 Minutes” that aired on Sunday night, Mr. Woodward discussed interviews he recorded with the president. He said Mr. Trump was warned about the danger at a Jan. 28 meeting by a deputy national security adviser, Matthew Pottinger.

“Pottinger said his contacts in China told him, ‘This is going to be like the 1918 Spanish flu pandemic that killed 675,000 people in this country,’” Mr. Woodward said.

The Spot: A presidential candidate is coming to Colorado, and Hickenlooper counts on voters not wanting a revolution

Putin warning: Russia’s leader MUST stay in power for his OWN safety