The 14th Dalai Lama, known as Gyalwa Rinpoche to his people, added: “Her reign, as Britain’s longest-serving monarch, represented celebration, inspiration and a reassuring sense of continuity for so many people alive today. Your mother lived a meaningful life with dignity, grace, a strong sense of service and a warm heart, qualities we all should treasure.”

Across the world, there has been an extraordinary outpouring of grief, sadness and shock over Her Majesty’s passing.

As people paid their own tributes, one sentiment was common – heartfelt thanks and gratitude for a lifetime of selfless devotion to duty.

Australia, a Commonwealth country visited 16 times by the Queen, had the sails of the iconic Sydney Opera House lit up with an image of her smiling face.

She had been present when the building was opened in 1973. The tribute paid to honour her as a “model of strength and stability”.

The Nasdaq Billboard in Times Square, New York, showed a smiling picture of Her Majesty and the Empire State Building nearby by was lit up in purple. 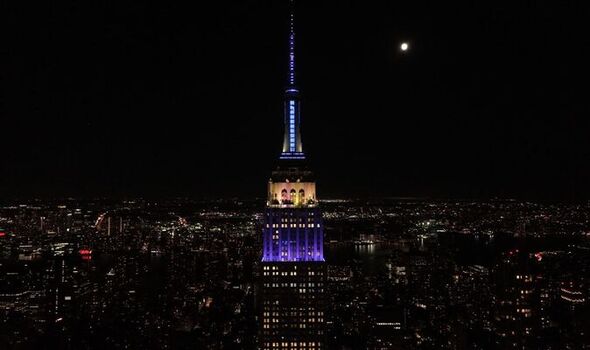 The city’s Tea & Sympathy British restaurant became a shrine, with mourners clutching flowers while ordering cups of tea as a way of paying their respects.

President Joe Biden signed the condolence book at the British Embassy in Washington while the US Ambassador Jane Hartley said: “We grieve with the people of the United Kingdom and the Commonwealth.

“There has been no greater steward of the alliance of friendship and cooperation between the United States and the United Kingdom than Queen Elizabeth. Her dedication to public service is an example to us all.

“Throughout her reign, she was always received in the United States with great respect and adoration, embodying everything we love most about the British – their humour, humility and grace.

“The Queen’s life of service has been a gift, not just to her people, but to the world.” 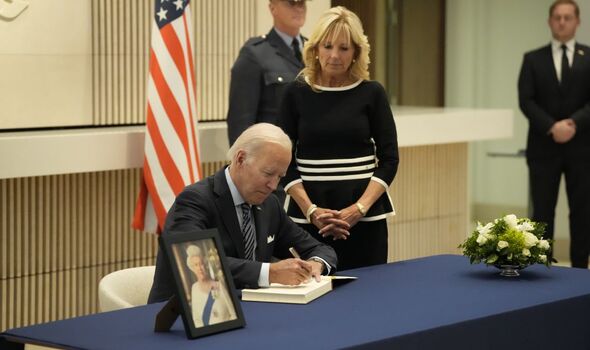 The national flag flew at half-mast in Kuwait City, the statue of Christ The Redeemer bore the colours of the Union Jack while the Elysee Palace in Paris paraded the British flag.

Both the Union Jack and Israel’s national flag were projected on the walls of Jerusalem’s Old City.

Members of the Armed Forces in New Zealand performed a ceremonial Maori haka at the Auckland War Memorial.

In Berlin, flowers and candles were laid outside the British Embassy, while in Venice God Save The Queen was played outside the city’s Festival Buildings.

The National Anthem rang out at the Venice Film Festival as Hollywood stars, including Brad Pitt, Ana de Armas and Adrien Brody, arrived on the red carpet.

Canadian Prime Minister Justin Trudeau said the Queen had “an obvious deep and abiding love for Canadians”. He added: “Her steady grace and resolve brought comfort to us all. I will miss our chats where she was thoughtful, wise, curious, helpful, funny and so much more.

“She was one of my favourite people in the world, and I will miss her so.” Chinese President Xi Jinping offered “sincere sympathies” and added: “Her passing is a great loss to British people.”

Flags were lowered to half-mast around the world including at the Nato headquarters in Brussels, Belgium. Ursula von der Leyen, President of the European Commission, said the Queen’s “empathy and ability to connect with every passing generation, while remaining rooted in tradition that truly mattered to her, was an example of true leadership”.

Queen Margrethe II of Denmark, now the world’s only reigning female monarch, wrote to King Charles to express her condolences.

King Willem-Alexander of The Netherlands, Queen Elizabeth’s fifth cousin, said he and his Queen Maxima remembered the “steadfast and wise” monarch with “deep respect and great affection”.

Ukrainian forces paid their own unique tribute by daubing artillery shells with “RIP Queen Elizabeth II” and “Keep Calm and Carry On” as they continued their resistance against Russian forces.

In Moscow, flowers including bouquets of red roses were placed at the British Embassy.

Can fully-vaccinated Britons visit the US? Rules amid August changes

West Midlands mayoral race: Why is this such an important race? Who are the candidates?

Surge in cases in countries that contained coronavirus in early months signals move to new phase, says WHO