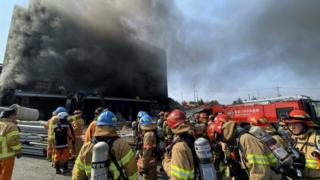 At least 25 people have been killed in a fire at a warehouse that was under construction in the South Korean city of Icheon.

The blaze was caused by an explosion of flammable material being used in the installation of insulation in a basement, South Korean media reported.

All the victims are believed to be construction workers. Some reports put the death toll higher.

Prime Minister Chung Sye-kyun has ordered the mobilisation of “all necessary personnel and resources” to tackle the emergency.

Lebanese call for an uprising after protests rock Beirut