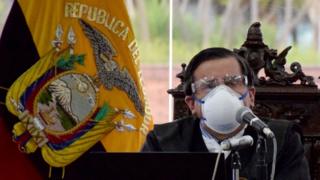 A top court in Ecuador has sentenced the country’s former left-wing president Rafael Correa to eight years in jail in absentia for corruption.

Correa was in power for 10 years until 2017, when he went into exile in Belgium. He denies any wrongdoing.

The court found him and 19 other defendants guilty of accepting $7.5m (£6m) in bribes from private firms in exchange for state contracts.

Those convicted were also banned from any political role for 25 years.

Among them is his former vice-president Jorge Glas, who is already serving a six-year jail term for accepting a bribe from Brazilian construction giant Odebrecht.

Correa tweeted a scornful response to the national court of justice ruling, which can still be appealed.

“Well, this was what they were looking for: manipulating justice to get what they could never get via the ballot box.

“I’m fine. I’m concerned about my colleagues. For sure we’ll win at international level, because all this is ridiculous, but it takes years,” he said.

Correa’s rule was characterised by large-scale social welfare spending and infrastructure projects, as well as defaulting on foreign loans and tensions with the US.