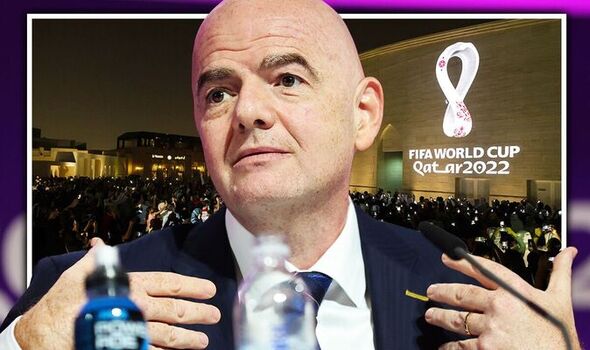 The football boss was accused of “colluding” with bigotry following a bizarre rant on the eve of today’s opening game, as he defended FIFA’s decision to award the tournament to a country where homosexuality is illegal and women are routinely discriminated against.

It provoked a torrent of criticism from politicians and LGBT rights campaigners. A Government source said: “This is the clearest sign yet that FIFA have lost the plot.”

Peter Tatchell, a veteran of the gay rights movement, accused FIFA of becoming “a mouthpiece for the Qatari despots” while MP Julian Knight, chair of the House of Commons Culture, Media and Sport Committee, said: “This looks like FIFA bigwigs making excuses for the hosts, who should never have been awarded the tournament in the first place.”

In an hour-long diatribe, Mr Infantino urged Europeans not to criticise Qatar, a country where same-sex relations are punishable by up to seven years imprisonment, because of crimes committed by the West.

Speaking in the Qatari capital Doha, he said: “I think for what we Europeans have been doing the last 3,000 years we should be apologising for the next 3,000 years before starting to give moral lessons to people.”

The FIFA head insisted he knew how it felt to suffer discrimination after growing up in Switzerland as the son of migrants from Italy. He said: “As a child, I was bullied because I had red hair and freckles, plus I was Italian”.

And he dismissed concerns about discrimination, saying: “Everyone who comes is welcome, whatever religion, race, sex orientation, belief she or he has. This was our requirement and the Qatari state sticks to that requirement.”

Advice issued by the Home Office to football fans warns that “homosexual behaviour is illegal in Qatar”.

Meanwhile, a report by Amnesty International highlighted the second-class status of women in the country, stating: “Women continued to face discrimination in law and practice.”

Amnesty has also highlighted the plight of migrant workers, warning that abusive employers have the power to cancel residency permits of workers who complain about poor treatment such as having their wages stolen.

Mr Tatchell, who yesterday led protests outside the Qatari embassy in London, accused FIFA of “colluding with the Qatari regime”.

The human rights campaigner said: “It is giving cover for a sexist, homophobic and racist dictatorship in Qatar.”

Actor Michael Cashman, the co-founder of LGBT campaign group Stonewall who shot to fame portraying one of the first gay characters in Eastenders, said: “Qatar like anywhere else should be questioned on its human rights record. It is failing.”

He added: “Human rights are universal and should apply across all civilised countries.”

Jacob Rees-Mogg, the former Cabinet Minister, criticised Mr Infantino’s grasp of history, saying: “The civilising effects of the Roman and British empires are still of great benefit. The standard of living, learning and life expectancy are all higher across the world thanks to these empires.”

Former Cabinet Minister Damian Green said: “FIFA are clearly getting desperate to defend the decision to award the World Cup to Qatar. This is a particularly divisive and ill-judged comment.”

Human rights lawyer David Haigh, who became the first openly LGBT managing director of an English football club when he took the helm at Leeds United, said: “In my view if anyone should be apologising it’s FIFA. FIFA needs to apologise to everyone – to the people they are asking to apologise and to the Qataris.”

Labour MP Chris Bryant, a former foreign minister, joined the criticism, saying: “Fifa is a disgrace. These comments show they have no concern for anything but money. I have rarely heard such idiotic comments.”

And Tory Michael Fabricant said: “They say the best form of defence is attack and it looks like Infantino’s infantile attack is just that. FIFA’s decision to hold the World Cup in Qatar was always controversial and they have much to defend.”

Former security minister Sir John Hayes called for an investigation into FIFA, saying: “It is hard to know whether this character is painfully ignorant or deliberately misleading … an urgent investigation into Fifa’s activities and his own is needed and I hope our sports minister will call for that.”

Whitehall sources challenged TV football pundits Gary Neville and Gary Lineker to speak out against Qatar’s human rights record. The former England internationals have both been criticised for flying to Qatar to cover the tournament despite their left wing views.

A source said: “Will Garies Neville and Lineker continue to go along with this insanity?”

However, Tobias Ellwood, chairman of the defence committee, argued that awarding the World Cup to Qatar would help the country on its “journey” towards greater freedom.

He insisted: “It’s not the snapshot we should focus on but the bigger picture of reform. Qatar is on a journey towards greater freedoms, transparency and accountability and this World Cup has significantly expedited their advancement.”

The decision to hold the World Cup finals in the Middle East nation has been controversial since it was announced in 2010, and former FIFA President Sepp Blatter admitted it was a “mistake” in an interview earlier this month.

As well as highlighting the country’s human rights record, critics say Qatar is too small, at half the size of Yorkshire, and too hot for players to perform at their best, with temperatures expected to reach up to 28°C in the tournament.

The finals begin today with an opening ceremony at 2pm UK time before Qatar play Ecuador. England’s first match is against Iran on Monday afternoon, while Wales play the USA on Monday evening.

Dolphin splashes around with swimmers in ‘once in a lifetime’ moment

BMW Kneecapped the M550i xDrive's Acceleration, but It's Fixed Now