BETHUNE, France (Reuters) – In a cemetery in northern France, members of the Charitable Brotherhood of Saint-Eloi de Bethune carried an urn towards a family tomb, each wearing a face mask that stood out against a uniform of black tails, white gloves and bicorne hat. 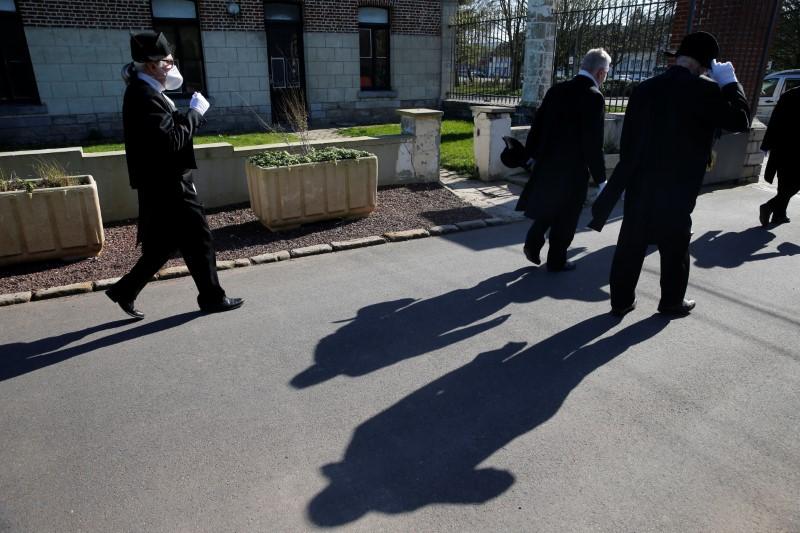 Behind them followed the deceased woman’s two sons, their partners, and a grand-daughter, their numbers restricted by a ban in France on large burial gatherings with the country under virtual lockdown as the coronavirus sweeps through Europe.

“We’re aware of the risks,” said brotherhood member Robert Guernot, “but our brotherhood was established during an outbreak of the plague.”

Guernot said he and fellow brotherhood members no longer embraced each other on arrival and endeavored to respect social distancing restrictions while carrying out their duties.

“Sometimes we can lift a coffin with four. Other times they’re too heavy and we need more.”

Founded in 1188, the Charitables have for eight centuries taken care of funerals for the inhabitants of Bethune regardless of religion or wealth. Rarely, though, are they done behind almost-closed doors.

But in towns and villages across France, streets are largely empty after President Emmanuel Macron ordered a lockdown unprecedented in peacetime France. Citizens are permitted outdoors only to buy food, travel to work and seek medical care.

Asked this week if people could attend the funerals of friends, Prime Minister Edouard Philippe replied: “It’s dreadful, but we have to say no.”

Cemeteries in the northern region are now closed to the public except for burials, when numbers must be limited to a deceased person’s most immediate family, the local prefet, who represents the interior ministry, has said.

It may prove a bitter pill for grieving families in the weeks ahead.

“In these difficult times, and in a spirit of solidarity and out of love for one’s neighbor, we are still there to accompany the families of the deceased, and thus provide them with support and comfort,” Guernot said.

As the ceremony drew to a close, the brotherhood members stood in a ring outside the cemetery, and said somberly with a single voice: “Requiescat in pace”.

The family turned and left, back to their confinement.

Earth on brink: Planet’s biodiversity at risk of extinction as warning laid bare

United Airlines debris calls too much for Broomfield police