The period of increased heat will begin on Monday, August 8, when the plume of heat from France will start dominating in the UK, seeing the mercury spike at 28C in central parts, including London. Then, by Tuesday parts of southern England will hit 30C, with the South East and central areas following closely behind at 29C. The humidity will become more widespread by the middle of the week, with both Wednesday and Thursday seeing most of England and parts of Wales blanketed by 30C – rising to 34C on both Wednesday and Thursday. And despite prior claims of the mercury cooling on Friday, new maps now show this will not be the case.

Thermometers will only drop by around three degrees at best, meaning many places will continue seeing 30C highs until at least Monday, August 15, when temperatures look first set to tumble.

This, however, has not been endorsed by the Met Office, which has said it’s not able to tell how long the heatwave may last.

But maps say it will be the second half of the month when temperatures begin to return to around 22C.

The Met Office is blaming the surge in heat on high pressure building in the Atlantic, and across the South and South West. 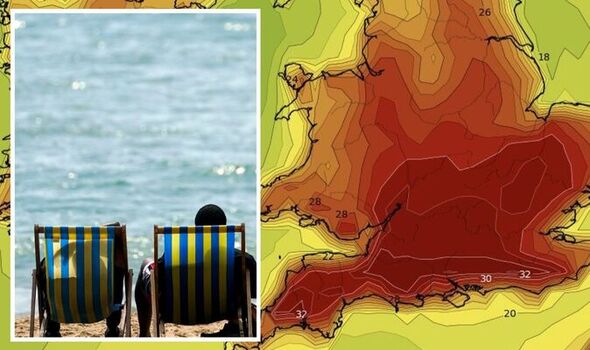 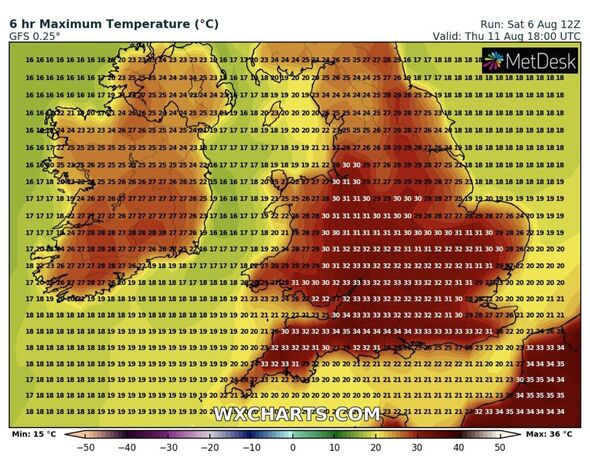 This also corresponds with interactive weather model WX Charts, which shows the heat building over Cornwall, Bristol and parts of Wales, before it radiates across England.

“Many areas of the UK, especially the South will witness temperatures several degrees higher than average, but these values are likely to be well below the record-breaking temperatures we saw in mid-July.

“As the high pressure builds there is very little meaningful rain in the forecast, especially in those areas in the south of England, which experienced very dry conditions last month. 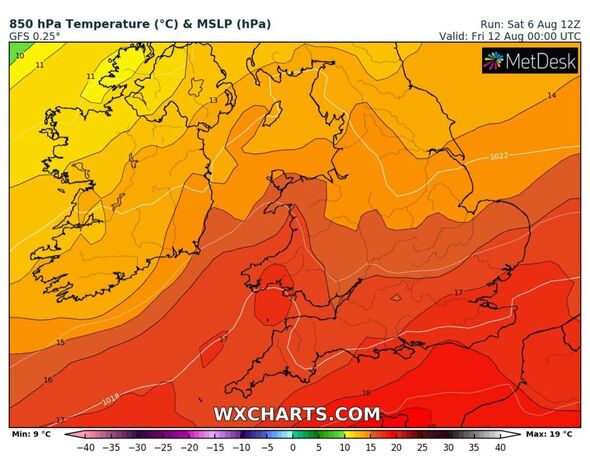 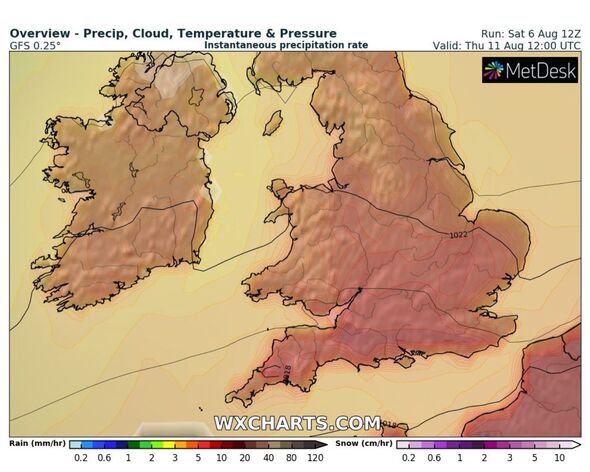 “Elsewhere in the UK, such as in northern England, Scotland and Northern Ireland, rain-bearing weather fronts will make limited headway against the high pressure, bringing some rain to north-western parts of the UK.”

Rebekah Sherwin is a deputy chief meteorologist with the Met Office.

She added: “The weather pattern bringing next week’s hot spell is different to the one responsible for last month’s record-breaking temperatures which saw already hot air being drawn up from southern Europe adding to our own home-grown heat.

“This time, that is much less likely; instead, temperatures will build steadily within the lingering area of high pressure.

“There is some uncertainty about next week’s temperatures, although in early August sunshine in the UK doesn’t have the heating potential of mid-July as the sun is lower in the sky and the hours of daylight are marginally shorter.

“Both of these factors suggest that we’re very unlikely to see temperatures peak much above low to mid-30s. However, this would still be a hot spell of weather.”

The Met Office added: “Although it’s too early to say how long the hot spell will last, there are indications of a return to more changeable conditions from about mid-August.

“While temperatures may continue above average in the south, this change would reduce the chance of prolonged high temperatures.”

The new normal: How safe are beaches?