Veteran Labour politician Dennis Skinner, 87, has lost the seat he had held since 1970 after being defeated by Conservative Mark Fletcher. Why did 2019 prove to be an election too far for the so-called Beast of Bolsover?

Dennis Skinner was not present at the overnight count in his Derbyshire constituency, having recently undergone hip surgery.

His absence held a sad irony, given that he has been very much an ever-present in British politics for the best part of five decades.

Like him or loathe him, his memorable public image – the famous finger, the voice raised above the Commons cacophony – struck a chord with many. 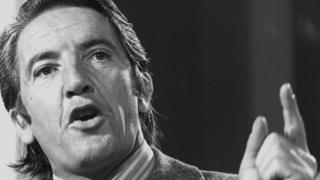 He supported the miners through the strike and beyond, fought for their pensions rights and was suspended from the House of Commons numerous times for what was deemed “unparliamentary language”.

His humorous heckles at the State Opening of Parliament became one of the endearing features of Commons life, where he became well-known for expressing his republican beliefs by heckling during the Queen’s Speech ceremony.

His quips included “Tell her to pay her tax” in 1992 and “Have you got Helen Mirren on standby?” following the release of the film The Queen.

Within his Bolsover constituency Mr Skinner was, for many years, seen as part of the landscape.

The area includes many former pit communities which have struggled since the closure of the mines, with many blaming the situation on former Conservative Prime Minister Margaret Thatcher.

For decades voters trusted Mr Skinner – himself a miner’s son who worked down a pit – with representing their views.

“Voting for Labour felt like a wasted vote,” she said. “I voted for the Conservatives. It hurt – I didn’t want to – but I felt I should vote for someone.”

She said she felt “surprised” Mr Skinner lost his seat but added: “No-one round here has any faith in Jeremy Corbyn.”

“It’s the things he’s done in the past, like the IRA stuff,” she said. “If Labour got a new leader, people would be a lot happier.

“I think people voted more tactically than from actually wanting to vote for the Conservatives. My family have voted Labour all my life.”

Former miner Malcolm Tomlinson, 75, who took part in two strikes, said he voted Conservative and was happy with the result.

“I’ve voted Labour all my life but I just didn’t like Corbyn or his cronies. It’s nothing to do with Brexit, although we did vote leave. If Labour had a decent leader I wouldn’t have changed.

“Bolsover hasn’t had much money spent on it. I never see Dennis Skinner around.”

He described the Labour party as “crippled” by the result.

“All that red gone – all those die-hard Labour voters changed sides. It’s sad.”

Nicky Cann, 29, who works in a pub said he also felt a sense of sadness.

“I’m gutted,” he said. “Not about Labour losing but about Dennis Skinner. He was a good MP.

“I knew the Conservatives would win but didn’t think it’d be here.”

Rosalie Welton, 75, a retired hospital worker, said she voted for the independent candidate.

“Corbyn has smashed Labour,” she said. “I’ve voted for them for 50 years but they’re nothing like what I used to vote for now.

“I felt like a traitor, I really did. But I was not going to vote for him – he wanted another referendum when we’ve already had one.”

Karen Hepworth, 62, who runs a crafts stall in Bolsover, would not say how she had voted but blamed Jeremy Corbyn for the result.

“Everyone says the same thing: they don’t like him and they’re fed up with Brexit.

“We have absolutely nothing – it’s disgraceful.

“If we lived down south, we’d not have this problem but they don’t spend money here.”

The perception that the constituency had been neglected – particularly in the town of Shirebrook, the home of Mike Ashley’s Sports Direct headquarters – rang true with many voters.

Troy Kissane, a plumber from Shirebrook, would not reveal how he voted but said Mr Skinner had, “had his time”.

“He’s way too old,” he said. “This area has been solid Labour for years and years but that’s all changed round since the Brexit vote.

“Shirebrook has had a huge amount of immigration to deal with and it’s had a massive effect on things like doctors’ surgeries.

But at the miners’ welfare charity in Shirebrook, the post-election mood was one of disbelief and deflation.

“Most of us would rather chop our hands off than put a cross in a box for a Tory. We never thought we would see this day.”

And yet, Mr Gascoyne admits he does know some former miners who have voted Conservative.

“I’ve had a few arguments with people,” he said. “Basically, there are two things that keep getting mentioned. The Labour party is seen as having stalled Brexit. When Theresa May got that deal, we should have supported it and got out.

“I suspect that, even though Dennis Skinner voted for Brexit, he has been tarred with that brush.

“And the other thing is Jeremy Corbyn. People don’t like him. It feels as if the Labour leadership are London-based and have forgotten about these solid Labour areas. And people think, ‘Well, we’ll show them’.”

Suspect in Portland shooting killed by police during arrest