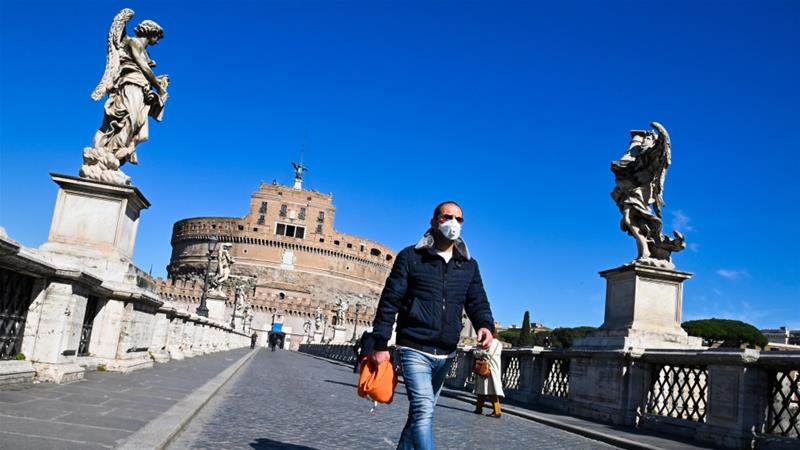 Italy tightened its coronavirus quarantine on Wednesday, ordering bars, restaurants and hairdressing and beauty salons to close, after the highest daily increase in deaths of any country outside China since the outbreak began.

In a televised address to the nation, Prime Minister Giuseppe Conte said all shops would be closed except for supermarkets, food stores and chemists and companies must close all non-essential departments.

“Thank you to all Italians who make sacrifices. We are proving to be a great nation,” Conte said in the nine-minute broadcast.

“We will only be able to see the effects of this great effort in a couple of weeks,” he said, referring to the daily bulletins announcing the number of new cases and fatalities.

The latest measures will take effect from Thursday and remain in place until March 25, the prime minister’s office said.

“The country needs responsibility from all of us, the responsibility of 60 million Italians that are making small and large sacrifices every day,” Conte said.

His sombre address echoed the words Conte used just two days ago when he widened a quarantine in the worst-hit northern regions to the whole of the country, banning all non-essential travel and public gatherings until April 3, halting sports events and extending a shutdown of schools.

The existing restrictions on public gatherings and travel had already emptied streets amid the forced closure of schools, universities and museums. Many other businesses had also shut.

Cathedrals posted hand-written notes cancelling mass and cafes apologised to their regulars for having to turn them away.

The central streets of Rome were deserted on Wednesday evening and buses that are usually crammed with commuters ran almost empty.

“I can’t even recognise Rome now,” 30-year-old Muscovite Yekaterina said while posing alone for a photo by the usually bustling Trevi Fountain in the heart of Rome.

Under the latest measures, trains and urban public transport will continue to operate, as will essential services such as plumbers, mechanics and petrol stations.

Such measures are taking a heavy toll on Italy’s economy and Conte announced earlier set aside 25 billion euros ($28.3bn) to support firms and families and soften the effect of the virus.

Elderly people are particularly susceptible to the virus and Italy has the oldest population in Europe with nearly a quarter of people aged 65 or over.

Most Italians appear to be respecting the most severe controls placed on any Western nation since World War II.

An opinion poll by the Ixe agency showed 89 percent of Italians backed their authorities’ draconian measures, with 78 percent saying they would support even tougher steps.

People have been told to keep at least a metre (three feet) from each other and handshakes are frowned upon. Italians have found themselves starting to talk to each other a few steps apart – while often laughing about the regulations along the way.

“As soon as the emergency has passed, we will organise a free carbonara day for doctors, nurses and healthcare workers,” a closing note by a restaurant in Rome’s popular Trastevere neighbourhood said.