KIEV (Reuters) – The black-robed Orthodox clerics sit in a line under an icon in one of Ukraine’s oldest monasteries, mixing up batches of hand sanitizer to distribute to the poor and the needy. 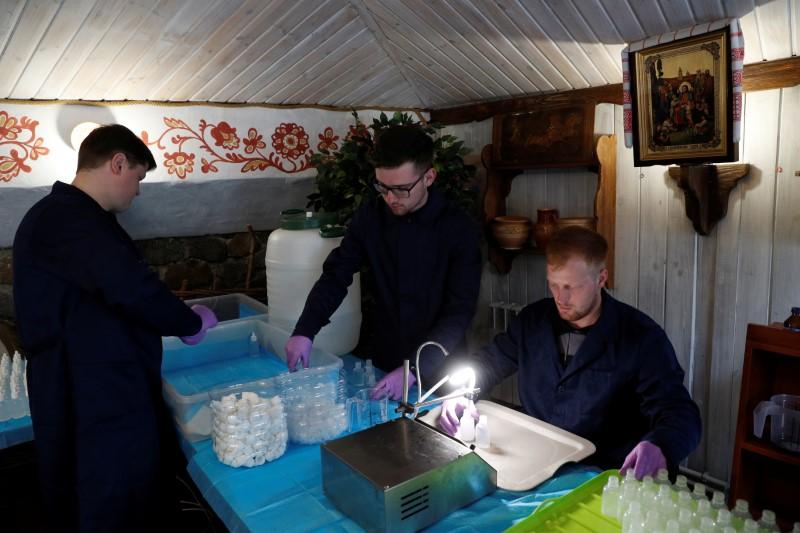 Wearing purple disposable gloves, the clergy and students in the 11th-century Vydubychi complex concentrate as they follow the recipe set out by World Health Organization and use sterilized gear to fill row after row of plastic bottles.

The monastery in Kiev started the operation after hearing people were struggling to get enough sanitizer to protect themselves against the coronavirus, Roman Holodov, head of the social assistance department at the Orthodox Church of Ukraine, said.

“People are in a panic, especially poor people who have no access to sanitizers,” he told Reuters.

Hundreds of bottles filled with clear liquid are boxed up in a room that used to be a Sunday school.

They are then sent to destinations scrawled on a whiteboard – cities from Odessa in the south to Mariupol in the east, close to the frontline of Ukraine’s simmering conflict with Russian-backed separatists.

Churches across the denominations have started adapting to the coronavirus which at the last count has infected 73 people in the country and killed three.

The Orthodox Church of Ukraine and the Ukrainian Greek Catholic church broadcast Sunday services online to comply with restrictions on gatherings. Priests have asked the faithful to stop kissing crosses or relics.

Sviatoslav Shevchuk, the Major Archbishop of the Greek Catholic Church, delivered his sermon in the Cathedral of the Resurrection of Christ of Sunday. The chairs were mostly empty, but more than 20,000 people watched on YouTube.

The spoon he used to administer communion to the few worshippers who were present was disinfected after each use.

“At our request, at our call, people stayed at home. And in my opinion, it shows their Christian and civic sense of responsibility,” he told Reuters after the service.

“I am a former doctor myself. And I understand the drama that a doctor faces when he has to decide who should live and who should die because of a single banal reason – that there are no means to save everyone.”

Rishi Sunak hits back at Remainers: You cant disentangle impact of Brexit from Covid

“My body isn't a progress board“: The real impact of tracking your body’s data