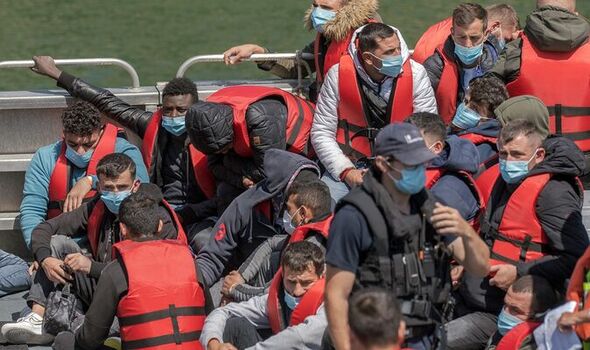 The Tory Party leader should prioritise persuading Paris to intercept boats leaving French beaches and secure a fresh returns agreement with France and the EU, they said. A report by an influential group of MPs today declares that the French president could take the initiative “with or without British assistance” and turn boats back.

But Mr Macron’s administration “refuses to countenance such a policy”, the home affairs select committee says.

Critics blasted the French government for failing to tackle “this evil trade” when they could do so “overnight”. Dover MP Natalie Elphicke said it is “beyond question” that the French Government is failing to “end serious criminality and save lives”.

She told the Daily Express: “They are simply not doing enough to prevent these dangerous crossings.

“The French should stop the small boats before they enter the water and accept returns when people crossed illegally.

French Government do more to tackle this problem.”

Tony Smith, a former director general of Border Force, agreed that new returns agreements with the EU, France, source and transit countries “should be an absolute top priority for the incoming PM”.

He told the committee there must be a “dedicated line of effort”, not just at the Home Office but at the Foreign Office and across Whitehall to secure it. Mr Smith said: “We can’t take back control of borders if we can’t remove people with no right to stay here.”

The home affairs committee went a step further, saying UK arrangements for the return of failed or inadmissible asylum seekers to Europe have now collapsed.

Tory MP Tim Loughton said: “Despite the funds from taxpayers to subsidise French police and security forces, and their boasts they have stopped more migrant groups getting on the water, the numbers reaching British waters is continuing to rise at record rates.

“The French could stop this evil trade overnight if they agreed to intercept the boats and return the occupants to French beaches or at least arrest and detain the migrants when detected on the beaches.”

France has a policy of not intercepting or turning back migrant boats unless they ask for help, and instead escorts them to British waters. It has repeatedly claimed it would be against maritime law for them to do otherwise as it could endanger the occupants.

More than 14,150 migrants have made the crossing so far this year. Last year, 28,526 made the journey in small boats, more than triple the number of 8,404 in 2020. Some 85 migrants were pictured arriving in Dover yesterday after being picked up by Border Force craft. Children were carried off due to the heat and some of the adult arrivals required wheelchairs.

Dame Diana Johnson, chair of the home affairs committee, suggested the Government’s Rwanda policy did not seem to put people off. She said: “Its deterrent policy of sending asylum applicants to Rwanda appears to have gone unnoticed by those who attempt to cross the Channel.”

Meanwhile, the committee suggests “juxtaposed” asylum assessment facilities. This would require France to accept they will remain responsible for people whose UK asylum applications are rejected.

The UK asylum assessment HQ would be in France and if successful, applicants would travel legally.

A Home Office spokesperson said: “There is no silver bullet to tackle the global migration crisis. Our New Plan for Immigration will bring in the biggest package of reforms in decades, allowing us to support those in genuine need while preventing illegal and dangerous journeys and breaking the business model of vile smugglers.”

Timeline of 2022 elections – Is there an election near you this year?