Muhyiddin’s rivals were planning to call a confidence vote to test the new leader’s support in parliament. 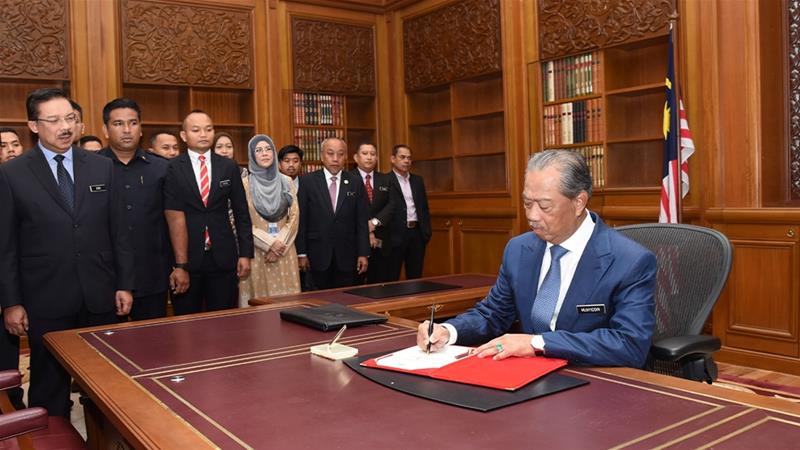 Malaysia’s newly-appointed prime minister Muhyiddin Yassin has postponed the start of the parliamentary session originally scheduled for March 9 by two months, after his rivals claimed to have more support and threatened his fledgeling coalition with a confidence vote.

Muhyiddin was sworn in on Sunday following days of confusion after a power grab among a disgruntled group of politicians in the ruling Pakatan Harapan coalition led to the sudden resignation of prime minister Mahathir Mohamad.

Speaker Mohamad Ariff Md Yusof said in a statement that he had received a letter from Muhyiddin stating the session would start on May 18. No reason was given for the delay.

Muhyiddin had been part of Pakatan Harapan and the home minister in Mahathir’s cabinet. Over the course of the week, he cobbled together a coalition that included Malay-based opposition party the United Malays National Organisation (UMNO) – tainted by corruption allegations and defeated in May 2018 elections – and the Islamist party PAS.

GPS, a party from the Borneo state of Sarawak, has said it will support the coalition but will not be part of it.

Worries over minority and human rights

The 2018 election marked the first time UMNO had lost power in six decades.

Ethnic Malays, who are Muslim, make up more than half the population of Malaysia, but there are substantial numbers of ethnic Chinese, Indians and Indigenous people. There are concerns minority groups will have little voice in the new coalition.

The abrupt change in government prompted anger among some Malaysians and two demonstrations over the weekend.

More than 20 protesters have been summoned for questioning by police over the protests, which were small and peaceful.

“Police summons in response to peaceful protests are a return to Malaysia’s authoritarian past,” Amnesty International’s regional director, Nicholas Bequelin said in a statement, urging the new government not to reverse the progress made in human rights over the past two years.

“These investigations are baseless and must be dropped.”

The tech that may help make worship Covid-secure

One in five hospitality and retail workers self-isolating, MPs told