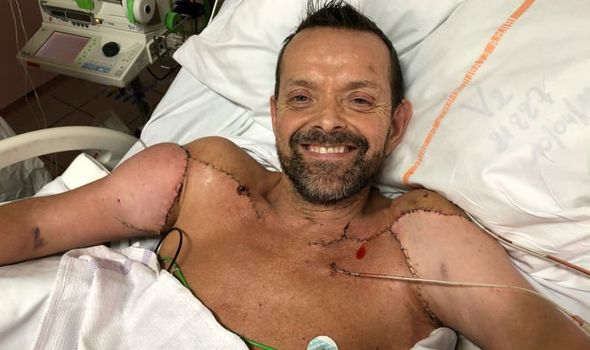 In 1998, Felix Gretarsson, now 49, was electrocuted while trying to fix a powerline in Iceland. He fell 32ft to the ground and both his arms were set on fire, his back was broken in three places and his neck fractured.

Felix had 54 operations while in a three-month-coma and doctors had to remove both of his arms to save his life.

He turned to drugs and alcohol abuse to help him cope and underwent two liver transplants in less than a year just to save him.

In 2007, Felix saw an advert for a lecture at the University of Iceland by world-renowned surgeon, Dr Jean-Michel Dubernard, who is most famous for performing the first successful hand transplant in 1998.

Desperate, Felix tracked down Dr Dubernard and begged him to perform a never-before-attempted double arm transplant.

Dr Dubernard said there was a possibility, but Felix would need to move from Iceland to Lyon, France so Dr Dubernard’s team could do the appropriate preparations.

Four years later, surgeons accepted his application, and Felix launched a nationwide fundraising campaign in Iceland to help pay for the €200,000 operation.

In 2017, the search began for a potential donor and finally in January this year he got the call saying a suitable donor had been found.

The next day, on the 23 year anniversary of his accident, Felix went to Hopital Edouard Herriot to have a double arm and shoulder transplant in a 15-hour surgery.

Six-months on, thanks to hundreds of hours of rehabilitation work, and after his body rejected the new limbs twice and a painful skin fungus, Felix can finally move his arms.

Speaking about his new arms, the grandad-of-two said: “When I woke up, the pain was excruciating. It was like there was two trucks parked on each of my shoulders.

“The feeling in the nerves can be a little painful when they grow. If you poke my arm I can feel the nerves inside even if I can’t feel the skin. I am moving the elbow in water, my bicep is now working and I just noticed the veins in my arms are starting to expand in the heat and that doesn’t happen unless automatic nervous system is working.

“I have achieved something that wasn’t supposed to be possible if I wouldn’t have pushed it and pushed it.

“It took a long time, but just because I was certain it would happen, when the goal is clear you always find a way.”

While Felix was waiting for his transplant, he met his now wife Sylwia Gretarsson in a bar in Lyon. He said: “Sometimes the bad things that happen to us are the reason the good things can happen to us further down the line.

“If I hadn’t lost my arms I wouldn’t be living in France with my wife today. So many good things you can take from this – this is what has kept me going. There is always a silver lining to everything.”