A wooden monument of Melania Trump has been removed from its plinth in Slovenia after it was set on fire.

The life-sized sculpture, which depicted a rough outline of the US first lady and the blue coat she wore at her husband’s inauguration, was torched on 4 July – as Americans celebrated Independence Day.

Local police have not given any details, citing an ongoing investigation.

Brad Downey, a Berlin-based US artist who commissioned the piece, said he had the disfigured monument removed on Sunday after he was informed of what had happened. 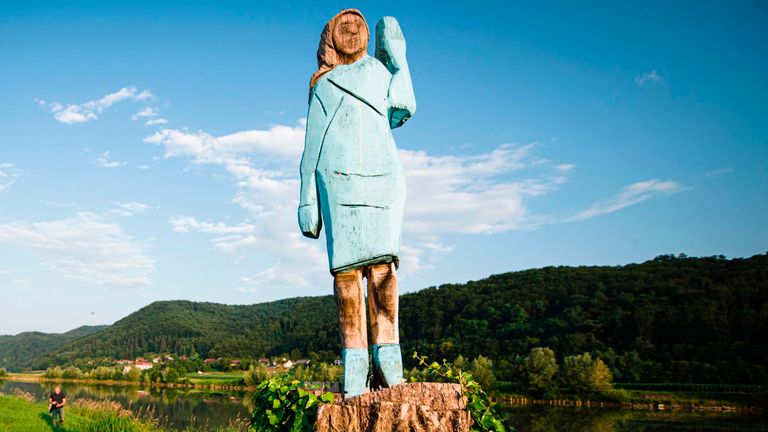 He said he now wants to know “why they did it” and would be keen to interview the culprits about their motives for a film he is making for an exhibition in Slovenia later this year.

The statue was commissioned, he said, to encourage conversation about politics in the US and Mrs Trump’s status as an immigrant married to a president with anti-immigration policies.

Prior to the blaze, the sculpture sat on a plinth near Mrs Trump’s hometown of Sevnica.

It was carved from the trunk of a living linden tree by local artist Ales Zupec, who used a chainsaw to bring the piece to life.

This is not the first time vandals have targeted a statue to the US presidential couple.

In January, a wooden statue of Donald Trump was also burned in the Slovenian city of Moravce, east of Ljubljana.

White supremacists are riling up thousands on social media