A biting chill is due to sweep across Britain bringing temperatures plummeting to as low as 2C during the day by next week. On Tuesday, September 27 the mercury will drop to these chilly lows across the north of the country, with places like Liverpool waking up to just above freezing temperatures. But the cold weather will also hit the south of Britain too bringing thermometers crashing down to 7C in Essex, Kent and Cambridgeshire in the south east. Interactive meteorological maps show the polar blast will affect areas north of the Midlands more so, just days after autumn was officially declared.

Many forecasters have predicted the cold snap for next week with the Met Office saying unsettled weather, including rain and strong winds, will head southwards by early next week.

Its forecast for next week and the start of October says: “During Sunday and early next week, it will probably turn more unsettled with rain and strong winds spreading from the north across many parts of the UK.

“Through the remainder of September conditions are likely to remain changeable with further frontal systems spreading from the west and northwest at times.

“The wettest conditions with periods of strong winds are likely in the north of the UK, with the driest weather in the southeast. Similar conditions are expected into the start of October. Temperatures near normal throughout this period.” 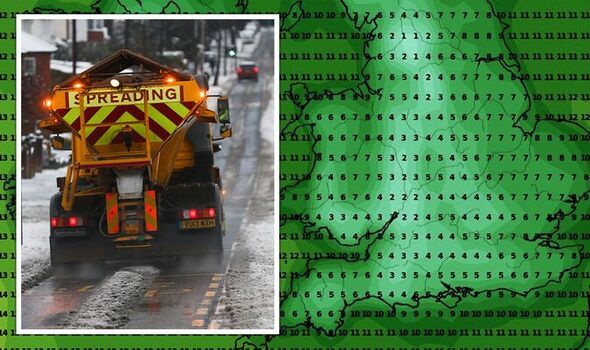 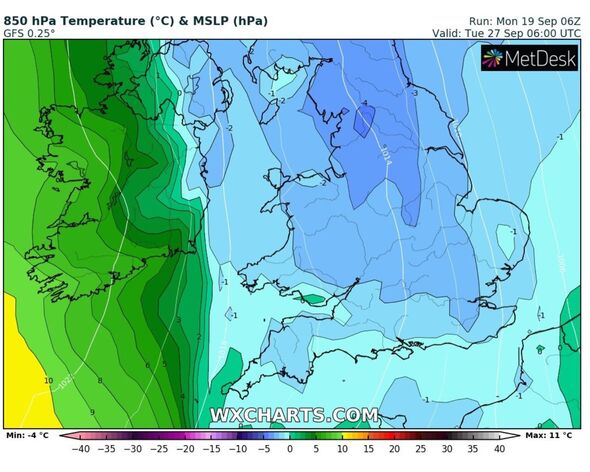 The Weather Outlook’s Brian Gaze also said a new GFS run, which is a weather model used to predict forthcoming conditions, also indicates a chilly period is on its way.

Taking to Twitter, he s: “GFS 12z is showing rather cold conditions early next week. The general pattern is consistent with a number of recent runs.”

He later added: “GFS 12z was one of the chilliest runs in the ensemble next week but support for a relatively cool period seems to be growing.”

Despite temperatures dropping next week, a period of turbulent weather is due to start from this Friday with wet and windy conditions set to move in first. 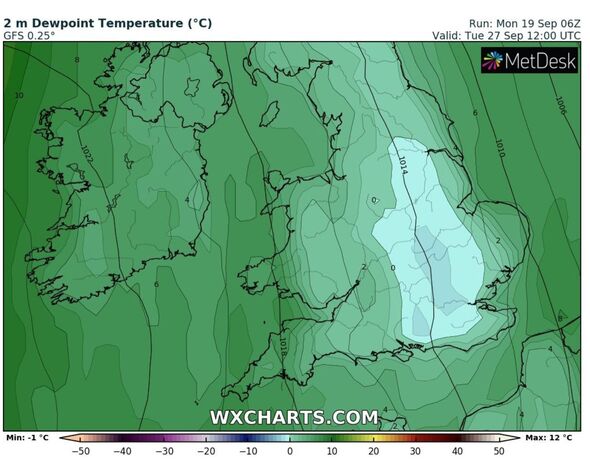 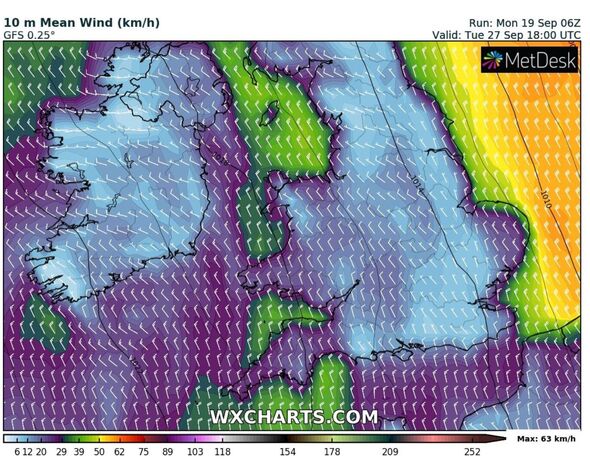 Mr Gaze continued: “Through Friday spells of rain become slow moving over the southern half of Britain and there could be some heavy bursts mixed in. Northern England, Scotland and Northern Ireland have sunny spells and showers. Cool in the wet areas.”

Looking towards the latter end of next week, the situation does appear to improve albeit slightly with a temperature increase by Thursday, September 29.

WX Charts maps show the mercury almost recovering back to highs of 15C in the south, which is aligned with the sort of conditions the nation has become accustomed to.

Despite Tuesday being the coldest, Wednesday, September 28 doesn’t look much better – with highs of 4C covering a large part of England.

The first snow of the year has reportedly fallen today in Scotland, and will likely be the first of many wintery showers.

This is according to The North Yorkshire Weather Updates Facebook group, who posted: “Ey up, Scotland had its first snow of the season this morning! If you’re mooching up Muker this evening it’s a bit nesh out like.

“It’s 2c and you’ll need ya Yorkshire tea bobble hat on to keep the lugs warm.”

Patches of snow have also been reported on the Scottish mountains Ben Macdui and Braeriach in the eastern highlands, with the Met Office confirming the lowest temperature in the last 24 hours was -1.7C at Shap in Cynvrua.

‘A new low!’ Boris on collision course with CoE as Bishops unite against Rwanda scheme