When Gottlieb’s Bakery reopened in Savannah, Ga., I rediscovered a taste of my childhood. But that link to the past shattered with a pandemic, and a death. 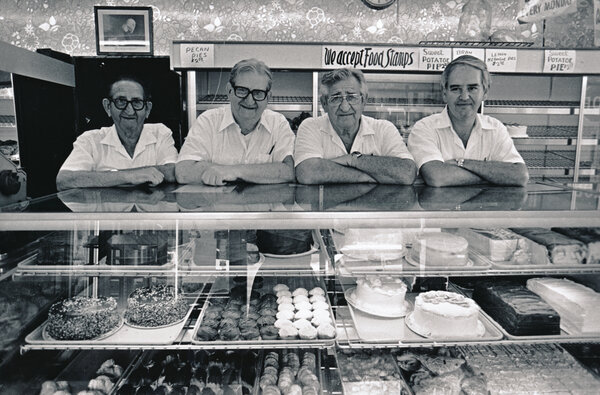 Was it really as good as I remembered?

My wife was asking. For years she’d heard me rhapsodize about the rye bread of my youth, and now, after decades of privation, I had before me the genuine article: a sandwich on Gottlieb’s rye.

Gottlieb’s Bakery, in downtown Savannah, Ga., had shut its doors in 1994, and I’d left town years before that. It had been more than 30 years since I last tasted its rye bread. It was conceivable that I’d romanticized it in the intervening years.

The sandwich at hand was pedestrian: vegan bologna, power-washed greens from a plastic clamshell, a slice of purple onion and Dijon mustard. But the first, sharp bite of rye was transporting. The last time I’d eaten it I was a carnivore, making Reubens with my mother’s corned beef instead of the tempeh I use now. 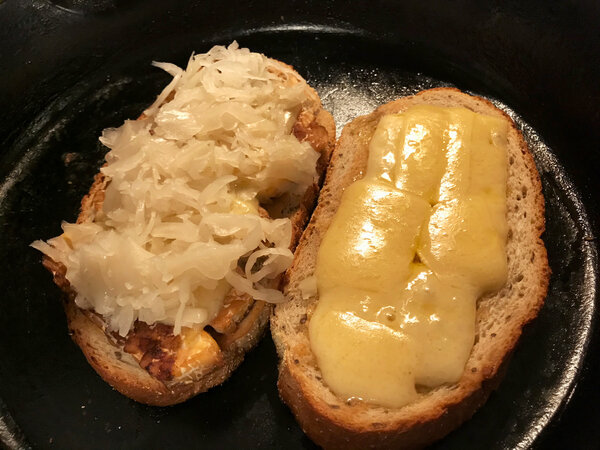 The knotty-pine-paneled kitchen of our postwar suburban home was steamy and redolent of corned-beef brine, mingled with the intoxicating waft of rye turning golden in the chrome Sunbeam toaster. My job, which I relished as a teenager, was to carve thin, even slices for the whole family with a finely sharpened butcher’s knife. As the six of us crowded around the kitchen table, the usual banter and bickering gave way to quiet industriousness as we each assembled our sandwiches.

I took the bread for granted. But now I realize that my parents went to some trouble to make that taste of the Old World part of our mid-20th-century American diet. The standard then was packaged factory-made bread from the supermarket.

Now and then, Dad would pick up a loaf from Gottlieb’s on his way home from his downtown office, and ask for it to be thinly sliced. As a child, when I happened to be with him, I would watch in awe as one of the Gottlieb men would nestle it in a machine, flip a switch, and a maw of serrated blades would jounce up and down, sawing it into an accordion of perfect slices.

The bread, with its chewy crust and sharp tang, graced school lunch sandwiches of chicken and roast beef. At home, I’d toast it for a shrimp salad sandwich. But there was nothing better than a naked slice of rye for breakfast, toasted with butter; eggs and grits optional.

Finding a suitable replacement was the least of my concerns when I moved to New York in the early ’90s. The city, after all, was the world capital of Jewish baking. It had the best bagels, the best rugelach. The brash, bumptious New Yorkers I’d encountered in college had assured me that everything in New York was “the best.”

On a childhood visit, I’d marveled at the city’s Jewish delis, black-hatted Hasidim and Jewish mayor, all sources of wonder to a boy from Savannah, where Jews were a tiny minority. Surely this city had world-class rye bread.

For years, I sampled the city’s brands and bakeries. One of my childhood friends, a kid named David Levy, had a poster in his bedroom, purloined from a famous ad campaign of the era, of a smiling Black child eating a rye sandwich under the slogan, “You don’t have to be Jewish to love Levy’s.”

I tried the other supermarket brands. I picked up loaves from the best Jewish bakeries on the Lower East Side and uptown. I ordered sandwiches on rye in the famous Jewish delis (“the best!”) in Manhattan and Brooklyn, where I lived. None equaled the rye of my memory.

After a few years, a startling truth began to creep up on me: That rye was a rare thing.

And a corollary: Perhaps, in this case, New York did not have the best.

I stipulate that I do not claim to have tried every rye bread out there. Nor have I carried out a rigorous side-by-side blind tasting. I cannot assert with any objective authority that Gottlieb’s rye was the best in the world ever.

My wife wisely suggested that perhaps the best rye was whichever one you grew up with. I’m sure there’s truth to that. Especially if you grew up in Savannah when Gottlieb’s was around.

Gottlieb’s was the city’s only Jewish bakery. That was not always the case. In its early decades, it had competition from Buchsbaum Bakery, my great-grandparents’ storefront enterprise. My grandfather delivered bread by horse and wagon to the working-class Jewish community on the Westside, then Savannah’s shtetl of striving Eastern European immigrants.

Our family’s bakery did not survive my great-grandparents, but Gottlieb’s, founded in 1884, persevered.

One reason Gottlieb’s endured had to do with local synagogue politics. Savannah, to the astonishment of my Yankee college friends, had been home to Jews since shortly after its founding in 1733. But by the early 20th century, the few thousand Jews had divided into three congregations representing the main branches of American Judaism. And for any communitywide activity, like Hebrew school or day camp, the Orthodox rabbis sought to impose their strict rules on everyone, including kosher food.

One consequence, since Gottlieb’s was the only kosher bakery, was that snack time at day camp was bug juice and a thick, dense Gottlieb’s shortbread cookie.

No bar mitzvah party was complete without a bad local band — a cover of the Doobie Brothers’ “China Grove” was de rigueur — and tables piled with Gottlieb’s goodies: rich brownies, moist rainbow cakes, canasta cakes and iced white petit fours adorned with a silver candy pearl or the name of the boy or girl of honor in blue icing.

In those years, Gottlieb’s rye was part of how my parents cared for my three sisters and me. Decades later, it reappeared when we were taking care of my widowed, octogenarian mother.

In 2018, she was laid low by Guillain-Barré syndrome, an autoimmune disease that kills most people her age. My sisters and I began visiting Savannah in weeklong shifts to help care for her.

During one visit, I learned that two members of the fourth generation of Savannah Gottliebs, Laurence and Michael, had reopened the family bakery in a soulless strip mall on Savannah’s Southside. Shiny and modern, it lacked the flour-dusted ambience of its precursor in the city’s oak-lined Victorian district. But it offered many of my old favorites: pecan sticky buns, cheese Danish, chocolate chewies and, I was delighted to discover, rye bread.

I began tacking a stop onto my visits: I would swing by Gottlieb’s on the way to the airport, pick up two loaves, thin-sliced and double-bagged, pack them in my suitcase and freeze them immediately upon my return. I would then make grilled cheese, tempeh Reubens, tomato-and-mayonnaise sandwiches, egg salad sandwiches and smoked whitefish salad on toast until my stash ran out.

It was the same bread I ate as a child, Laurence Gottlieb told me, the recipe given him by his father, Isser Gottlieb, who ran the bakery, initially with his father and uncle, for more than 50 years. Isser said the recipe was the same one his grandfather had brought with him from Eastern Europe, according to Isser’s widow, Ava.

Jewish-style rye is a sourdough, and that rye tang embedded in my taste memory comes from the starter. Laurence makes his with medium rye flour, water and natural yeast.

The recipe is equally spare: “Salt, yeast, caraway seeds, flour, water and the starter — that’s it,” he said. “The shelf life isn’t there,” he admitted, but that’s not the point.

There had been minor adjustments over the years, not to the heirloom recipe but to the process. The old bakery on Bull Street had no air-conditioning, so the bakers threw ice in the dough as they mixed it to lower the temperature. The starter was mixed by hand in a large bucket, a job no one wanted because it would stick to your skin like wet cement.

Gottlieb’s made deli rye, corn rye, onion rye, seedless rye, rye rolls and marbled rye with swirls of pumpernickel. They were shipped by Greyhound bus to small towns in Georgia and South Carolina that didn’t have their own bakeries, and expressed overnight to devotees farther afield who were happy to pay a premium for a superior sandwich.

Like me, Ava Gottlieb remembers visits to New York City delis that were culinarily thrilling, but the bread disappointing. “It wasn’t because I was prejudiced,” she said. “Our bread was better.”

The original bakery succumbed to supermarket competition in 1994, a victim of the American preference for convenience over quality.

Laurence, now 47, had grown up in the bakery, but had trained to be a chef and was cooking in elegant restaurants. Then one day he happened into a bakery. “I walked in and fell in love with it,” he said. “The odor, the yeasty sweetness of the bakery just does something in my mind.”

In 2016, he opened the new Gottlieb’s bakery with his brother.

In March, our Savannah trips ended. My mother’s assisted-living home barred visitors as the front end of the pandemic edged into view. That didn’t stop my mom from contracting Covid-19, landing her in the isolation ward of an understaffed rehabilitation center. She recovered from the virus but died there, alone, in August after a fall.

My sisters and I flew to Savannah to bury her. The funeral, in a cemetery overlooking the marsh on a warm August morning, was spare. A handful of relatives sat amid rows of empty folding chairs and the insistent sound of cicadas. The rest watched on Zoom.

Before returning to New York, I had one last errand to run. I drove my mother’s battered Toyota to Gottlieb’s.

Part of the shopping center was being torn down. The bakery had been evicted. With the retail market in a tailspin, the Gottlieb brothers had no plans to reopen. The all-too-brief reprise of Gottlieb’s rye was over.

The smell and taste of things, Proust wrote, hold in the “tiny and almost impalpable drop of their essence the vast structure of recollection.” A morsel of madeleine in a spoonful of tea evokes a childhood in a French village; a bite of rye with Dijon mustard calls up mine in Savannah.

In the white-roar silence of the plane back to New York, my mother’s voice was already attenuating in my head, the solid force of her life fragmenting into snatches of half-remembered anecdotes. The rye bread was gone.

It was as good as I remembered.

US crews vacuum ‘murder hornets’ out of Washington nest

Helpful Britons give up nearly 10,000 hours over their lives to help others