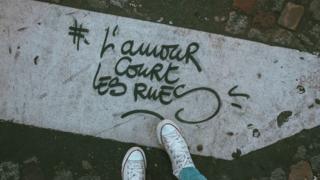 A group of 25 woman have accused a well-known Parisian graffiti artist of rape and sexual assault.

The women filed a joint complaint with the public prosecutor in Paris on Tuesday, saying the alleged attacks took place over the last 11 years.

Known for his tag “love runs the streets”, the artist, identified as Wilfrid A, has denied the allegations.

Several of his tags have been erased and replaced with “the rapist runs the streets”.

The attacks allegedly took place between 2009 and 2020, mostly in the Montmartre district in Paris’s 18th arrondissement.

All the women were aged between 16 and 26 when they say they were assaulted. Wilfrid A is reportedly in his 50s.

Joseph Cohen-Sabban, a lawyer representing Wilfrid A, told Franceinfo his client “denies the facts” and “doesn’t even know who is attacking him”. He added that the artist plans to “defend himself”.

What are the allegations?

“We have never seen a case of this magnitude,” Ms Rebérioux told Franceinfo, saying they had received more than a hundred testimonies in the space of just 10 days.

Ms Rebérioux said he had a pattern, contacting each of them “for professional purposes, boasting about his fame and influence”. He then offered to help them and sent them an address which was in reality his home, she said.

A woman identified as Chloé told Le Monde newspaper that she met Wilfrid A in front of her school in 2015, when she was 16 and he was 50.

“He told me that I was magnificent, that I could be a model, that he worked in fashion,” she said. He invited her to a photo shoot at his house.

Chloé said during the shoot Wilfrid A told her she looked “ugly” and gave her alcohol and marijuana, telling her: “You have to turn me on.”

“While I was in a daze, he lay on top of me, telling me that it was okay to sleep with your photographer,” she told the paper.

French magazine NEON published an investigation into Wilfrid A in late June, detailing the accounts of 16 women contacted by the artist. According to the magazine, Wilfrid A was twice detained for rape in 2013 and 2019.

The allegations follow the appointment of a new French government.

New interior minister Gérald Darmanin is himself under investigation for alleged rape, something he strenuously denies.

Feminists have come out to protests against his appointment and the new controversial choice for justice minister, Éric Dupond-Moretti.

The defence lawyer has reportedly won more than 120 acquittals for his clients, including a university professor accused of killing his wife and a man accused of ordering the assassination of a French politician in Corsica.

Vladimir Putin terrified his advisers in vicious meeting: They were scared