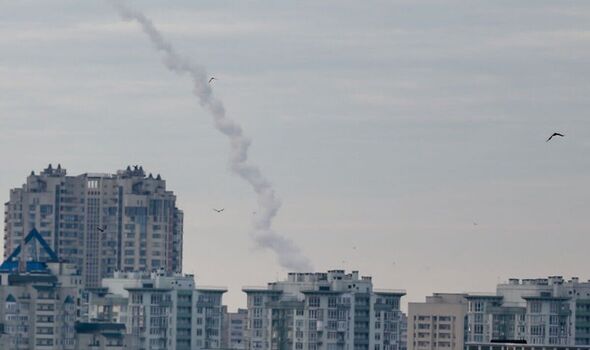 Explosions were reported in Kharkiv, Odessa, Lviv and Zhytomyr as well as Kyiv, although it remains unconfirmed if the blasts heard in the capital were caused by Moscow’s missiles or Ukraine’s own air defence.

The Ukrainian Air Force said Russia had made use of air and sea-based cruise missiles, in addition to loitering munition, more commonly termed kamikaze drones.

On Thursday, a desperate Telegram address from the Air Force told Ukrainians to “stay in cover” following the nighttime attack as there was still “high activity” among Russian units.

Oleksiy Arestovych, a national security and defence advisor to President Zelensky, confirmed more than 100 missiles had arrived in “several waves” throughout the early hours of Thursday morning. Later reports suggested the figure was closer to 120 missiles.

He urged the citizens of Ukraine to seek shelter and avoid publicly sharing the exact locations of missile strikes or defence launch sites.

He wrote: “If you do this, you will correct the enemy’s fire.”

Governor of the Odesa Oblast Maksym Marchenko also encouraged residents “not to film or comment on the work of air defence units”.