A suspected Ukrainian military drone has been found on a beach in Crimea, leaving Russia worried that the device might be used by Kyiv for gathering intelligence on Russia’s Black Sea Fleet, a news report has stated.

Naval News reported that Omega Bay is just outside the entrance to the harbor and is in an area used by the Russian Navy. It is around 150 nautical miles from Ukrainian controlled coasts.

Earlier this week, Britain’s defence intelligence agency said the move was “highly likely due to the recent change in the local security threat level in the face of increased Ukrainian long-range strike capability”.

Defence experts assessed this to be a reference to Ukrainian long-range artillery and missile systems. That view may be changed in light of the previously unseen vessel.

The uncrewed surface vessel (USV) is thought to be about the size of a kayak and powered by a single inboard motor with a steerable waterjet propulsion system. 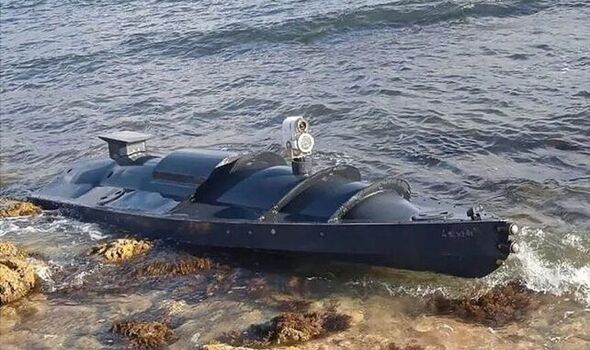 A mast-mounted camera is likely able to operate by day and night. A fixed panel behind the mast is thought to be a flat antenna, for communication and navigation.

There are two forward-facing sensors in the bow of the USV, which could be trigger mechanisms for an explosive device located in the drone.

The range of electronic devices suggest the craft would have been capable of filming Russian surface and submarine naval vessels, providing accurate locations for a subsequent missile attack.

With such a low profile, it is likely the USV would have been very difficult for Russian radar systems to identify in open water.

Mechanical failure or a loss of communications could account for it running aground near the naval base.

According to local reports, the device was towed out to sea and destroyed. Local media reported “The explosion in Sevastopol is the destruction of a floating drone.”

Governor Mikhail Razvozhaev was quoted as saying (translated): “A part of an unmanned vehicle was discovered, which was examined by experts.

“After the survey was completed, this apparatus was destroyed at sea by an explosion. No one was hurt.”

The Ukrainian Government has not responded to the reports.